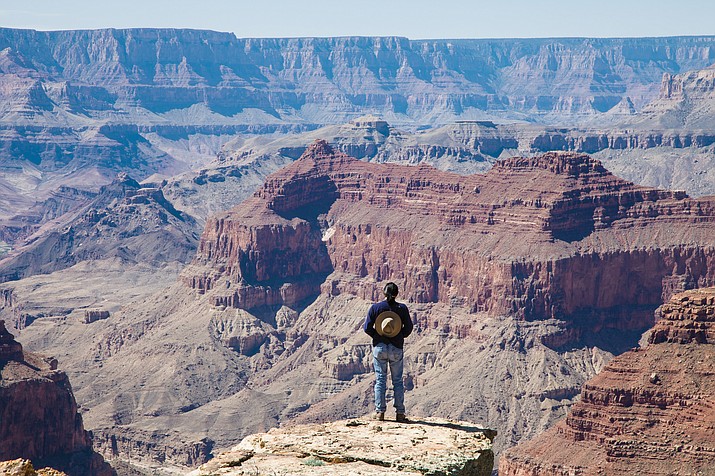 The Confluence, where the Little Colorado and Colorado Rivers meet. The area is considered sacred to many Native American tribes and is the site of a proposed 420-acre development by Confluence Partners, LLC, which was voted down in a special session of the Navajo Nation Council Oct. 31.

In a 16-2 vote, the Navajo Nation Council voted down legislation for the Grand Canyon Escalade.

WINDOW ROCK, Ariz. — The Navajo Nation Council voted down legislation, during a special session Oct. 31, for the Grand Canyon Escalade project, which included a gondola tramway on the western edge of the Nation at the confluence of the Little Colorado and the Colorado rivers.

The legislation included $65 million for the development of infrastructure for the project site and would have also authorized the Navajo Nation Hospitality Enterprise to enter into a development and operating agreement, approved a non-compete agreement, waived certain provisions of the Navajo Nation Code and accepted the approval of a land withdrawal in the Bodaway/Gap Chapter.

Navajo Nation President Russell Begaye said the project has come before the council in previous years and in every instance, the council has opposed the development.

“The developer was asking the Navajo Nation to pay out millions to help develop the project,” Begaye said. “Our administration has opposed the development since we came into office. We have been very clear that we will not sign off any agreement for this project."

Grand Canyon National Park Superintendent Chris Lehnertz said the park respects the sovereignty of Navajo Nation, its people, and the process to fully review and consider the Escalade project proposal.

"We encourage and support the need for sustainable tourism and economic development and look forward to continuing to work with the Navajo Nation and all our Northern Arizona neighbors," Lehnertz said in a statement. "Grand Canyon National Park is committed to identifying new world class tourism opportunities and partnerships with tribes under the NATIVE Act (Native American Tourism and Improving Visitor Experience) that align with resource stewardship and protection, building capacity with tribal tourism partners, and enhancing preservation of cultural traditions distinctive to Grand Canyon."

“We did it,” the Save the Confluence Facebook page said after the vote. “We killed the Escalade monster.”

Tribal representatives from the Hopi and Zuni Tribe were in attendance at the special session.

Hopi Tribal Chairman Herman G. Honanie thanked the Navajo Nation Council for its decision saying the land is sacred to both tribes. Honanie said in a letter a year ago that the proposal would “irreversibly compromise the tranquility and sacredness” of areas the Hopi Tribe has held sacred for at least a thousand years.

"The Hopi Tribe and many other Southwestern tribes, including the Navajo Nation, hold the Grand Canyon as a sacred place of reverence, respect and conservation stewardship,” Honanie said in his October 2016 letter to Navajo leaders.

Honanie said that while the media sometimes emphasizes the differences between the two tribes, today was a day for rejoicing the tribes’ common respect for each other’s sacred commitments.

"The Navajo and Hopi people are and shall remain neighbors, and desire to live in harmony with mutual respect for each other for all future generations,” Honanie said.

Director Leigh Kuwanwisiwma, who heads the Hopi Cultural Preservation Office, added that the site would have disturbed land where Hopi pilgrimages have been taken for more than a thousand years as part of a ritual initiation for Hopi young men. He added the proposed gondolas on either side of the confluence would go over the top of sites used for sacred ceremonies and construction of the Escalade would destroy Hopi sites.

Wilfred Eriacho, Sr., head councilman from the Zuni Tribal Council, said he was happy with the council’s decision to not approve the legislation

“Ever since we learned about the proposed Grand Canyon Escalade Project legislation, we put forth resolutions opposing this development,” Eriacho said. “This area of the Grand Canyon holds cultural significance to our people. For us, it’s a place of emergence and we hold the area in great reverence.”

The final vote on the legislation came after years of contention over the project, starting with a controversial and contested chapter vote in Bodaway/Gap in 2012, which narrowly approved the project.

Representatives from Confluence Partners, including R.L. Whitmer, were on hand for the vote and joined legislation sponsor Council Delegate Benjamin L. Bennett in presenting the legislation to the council Oct. 31. Bennett introduced the legislation Aug. 29, 2016 and it slowly made its way through several committees, all of which opposed the legislation or tabled it for the full council.

While Bennett said during the special session that the project would contribute to the Nation’s annual revenues, especially with the Navajo Generating Station set to close after 2019, opponents of the legislation said the agreement was one-sided and benefited Confluence Partners instead of the Navajo Nation.

Council Delegate Jonathan Perry said the Nation was setting itself up for something bad.

Prior to voting on the amendment, Council Delegate Seth Damon said he strongly supports development proposals that benefit the Navajo Nation, especially within the Western Navajo Agency, but he questioned several provisions in the legislation.

“I would support this if it was more constructive and knowing the Navajo Nation is not being ripped off,” Damon said.

Despite that amendment and another one offered at the last minute by Council Delegate Leonard Tsosie to counter opposition from council delegates that called for Confluence Partners to fund $3.5 million for the design and construction of a multi-purpose community center for the Bodaway/Gap Chapter, the legislation was voted down, 16-2, with six delegates not present. Council Delegate Leonard Tsosie and Bennett were the only two yes votes.

“We appreciate our leaders for respecting the voice of the people,” Begaye said. “We will continue to stand with our people in opposing the development of the Grand Canyon Escalade Project.”

The council serves as the final authority on the bill, which required a simple majority after Naabik’íyáti’ Committee amended the legislation in July to remove certain waivers of Navajo Nation laws that were contained in the original bill.