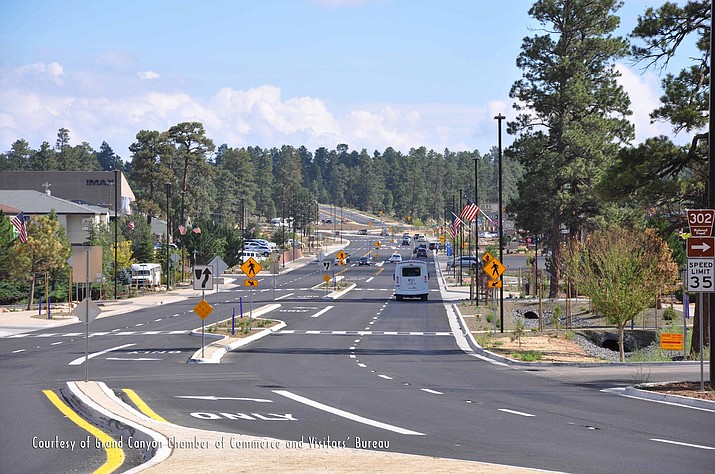 Photo courtesy of Town of Tusayan

Buildings up to or exceeding 65 feet could be coming to Tusayan after new ordinance passes.

TUSAYAN, Ariz. — At its April 19 meeting, the Tusayan Town Council unanimously voted to accept the recommendation of the Planning and Zoning Commission to raise the building height of some town structures from 45 feet to 65 feet.

Now, that decision could be headed for a public vote after Tusayan resident Clarinda Vail circulated a petition to allow voters to approve or disapprove of the measure at the ballot box.

The prospect of a building height increase came about in 2015, when the town was in negotiations with Stilo Development U.S.A regarding property at Kotzin Ranch and Ten X Ranch. Duthie said Stilo representatives at that time asked the town to consider discussing the change, but was careful to point out that a decision on the matter was not a part of the negotiations.

“Initially, they (Stilo) asked us if we would have a discussion, and we said ‘sure, we’ll talk about it,’” said town manager Eric Duthie. “That was in 2015. It was left off the agenda until Stilo followed through with their promise of handing the town the deed to the Ten X property. That happened Dec. 30, 2016, and after that time, the item was placed on the agenda as agreed.”

On April 18, the Planning and Zoning Commission took up the matter in a public hearing. After consulting with the contracted town planner, the commission decided to modify the proposal from 65 feet across all zones to include just five zones — commercial, multi-family residential (apartment housing) and planned community (properties at Ten X Ranch and Kotzin Ranch). During that hearing, Vail, Alicyn Gitlin of the Sierra Club and the National Park Service (NPS) spoke out against the measure. The commission voted to accept the revised ordinance 3-1.

At the council meeting the following night, the town council heard again from town planner Lawrence Tomasello, along with Vail, Gitlin and the NPS. After a tense debate, the council voted unanimously to accept the measure, despite calls for more information about potential impacts to the community and the park.

Duthie explained that, since the town council made changes to a zoning ordinance, which is a town law, there is a 30-day waiting period before the measure can take effect. During that time, residents can file paperwork and circulate a petition calling for a special election. Duthie said Vail submitted her petition May 18, within that window.

Once the petition has been filed, the town clerk has 20 working days to process it and send it to the Coconino County Recorder, where the signatures will be certified. For the petition to be valid, it must contain signatures of a certain number of registered voters who participated in the last election cycle for a council member or mayor.

If 18 of the 30 or so signatures are certified by the county, Duthie said, the town council must call a special election and place the measure on the ballot.

Duthie said if the measure fails at the ballot box, the ordinance will revert back to the previous height limit of 45 feet. He said he expects the petition to be certified as valid and a special election to be called.

“As town manager, I view this as due process,” he said. “If an issue arises, the town has a procedure for how to handle it. Voters need to have a process for allowing their concerns to be heard. That’s why the process is built into the law.”

Other council actions include changing the meeting schedule from twice per month to once per month. The new schedule will begin at the next meeting — June 14 at 6 p.m.

The council also approved a new staffing position for the town. The administrative assistant will provide support to both the town manager and the town clerk.

There is currently a vacancy on the Planning and Zoning Commission. Interested parties can submit a letter of interest to Duthie at tusayantownmanager@gmail.com.