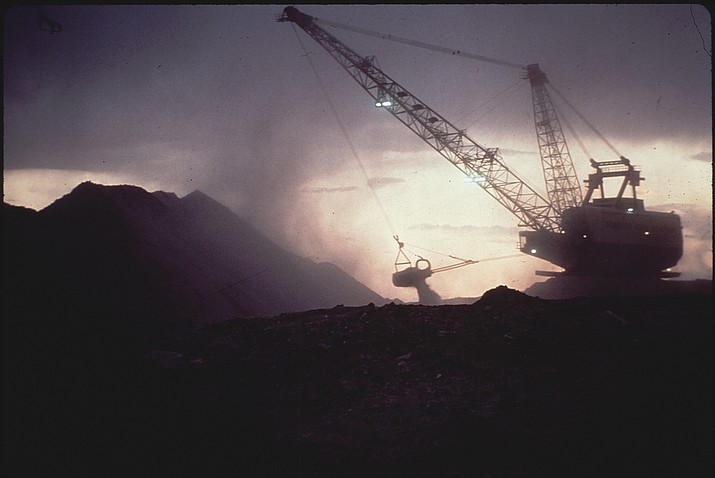 Peabody Energy, which extracts coal from Kayenta Mine on the Navajo Reservation and Black Mesa Mine (pictured) on the Hopi Reservation, is one of more than 300 companies operating under federal coal leases.

According to the American Association for the Advancement of Science, around 40 percent of all coal mined in the U.S. is extracted from federal lands through lease agreements with the Department of Interior (DOI). It’s a system built on the Mineral Leasing Act of 1920, and the last formal review of the program was 35 years ago, in 1982.

Last year, the Obama administration placed a moratorium on new federal coal mining leases pending a thorough review and overhaul of the program amid calls for a study of the program’s impact on climate change and concerns that taxpayers were being shortchanged by outdated royalty fees. At the time, Interior Secretary Sally Jewell stated the decades-old program needed to be re-evaluated based on modern science.

“It is abundantly clear that times are different in the energy sector now than they were 30 years ago, and we must undertake a review and that’s what we need to do as responsible stewards of the nation’s assets,” Jewell said in a 2016 interview. “There was a time, 30 years ago, when our nation had very different priorities and needs. The result was a federal coal program designed to get as much coal out of the ground as possible, and in many ways that’s the program that we’ve been operating ever since.”

In August 2016, Grand Canyon Trust filed a Freedom of Information Act (FOIA) request with DOI and BLM to obtain documents related to the effects of federal coal mining on climate change, as well as the schedule of royalties collected. The FOIA allows citizens and journalists to obtain specific information from government agencies. Agencies have 20 days to respond to FOIA requests, with an additional 30 days granted if the request is large or would impede daily operations by placing undue burdens on staff members.

On May 8, Grand Canyon Trust filed a lawsuit in U.S. District Court in Washington D.C. to force the agencies to release the requested documents nearly nine months after the FOIA request was made.

“The Freedom of Information Act allows Americans to keep their government accountable and it can’t function when a request that is supposed to take 20 days remains unanswered nine months later,” said Eric Ames, an attorney representing the organization. “It signals a disturbing lack of transparency and disrespect for a law that is a cornerstone of democratic governance.”

The Bureau of Land Management (BLM) manages around 550 million acres of land eligible for coal leases. In a 2015 report, the agency stated it currently administers 310 coal leases, which generated about $700 million in revenue for the government in 2014, the last year for which data was available.

Amber Reimondo, energy program director for Grand Canyon Trust, pointed out that private companies can rent an acre of federal land for about the price of a gallon of milk.

“The federal coal leasing program is failing taxpayers, polluting air and water, and lining the pockets of coal company executives,” she said. “The American public deserves to know why our government is turning a blind eye to clear science and the real economics of dirty coal mining.”

The Mineral Leasing Act of 1920 establishes guidelines for how much companies must pay in royalties (a portion of the sale price) and how much of a particular resource can be extracted. Currently, companies must pay 12.5 percent in royalties for surface-mined coal and 8 percent for coal mined from beneath the surface. Additionally, companies must submit bids for the tracts of land that meet or exceed BLM’s fair market value estimate of the property and pay an annual rental fee of $3 per acre. Those fees brought in an additional $2.8 million in 2014.

But the question posed by Reimondo and others is about more than the industry’s current financial arrangement with the government: what is the true cost of unbridled coal mining on public lands?

Supporters of both sides have demonstrated that the issue is far from simple — it’s a predicament illustrated by the current situation at Page’s Navajo Generating Station. The coal-powered plant and its exclusive supplier of coal, Kayenta Mine, provide about 3,000 jobs for Navajo and Hopi workers, according to Navajo Nation spokeswoman Meghan Cox. With the plant’s future in jeopardy, it’s an economic driver for both tribes that can’t be readily replaced.

Rep. Rob Bishop (R-Utah), whose state is home to a sizable coal industry, panned the moratorium and efforts to both review the lease program and raise royalty rates associated with it.

“Coal on federal land belongs to all Americans, but the moratorium is denying people access to their own abundant, low-cost energy source,” he said.

Several state attorneys general, however, along with conservation groups have served notice that the federal coal lease program is still long overdue for an official review.

Earlier this month, four states — New Mexico, California, New York and Washington — sued the Trump administration for reversing the moratorium “with no justification other than an objection to the time and cost of complying with the law.”

The lawsuit, filed in Great Falls, Montana, alleges that lifting the moratorium without properly considering the environmental effects or ensuring that the program is providing fair market value for the publicly owned coal violates federal laws.

Back in March, a coalition of conservation agencies also sued Zinke, the DOI and BLM, filing a similar lawsuit in Great Falls challenging the decision to lift the year-old moratorium on new leases.

Citizens for Clean Energy, EcoCheyenne, Montana Environmental Information Center, Defenders of Wildlife, Center for Biological Diversity, Sierra Club, WildEarth Guardians and the Northern Cheyenne Tribe state in the suit that the defendants “opened the door to new coal leasing and its attendant consequences without first performing an environmental review evaluating the program’s significant environmental, health, and economic impacts — including impacts from climate disruption caused by the burning of fossil fuels such as coal, and socioeconomic and environmental impacts to local communities” in violation of the National Environmental Policy Act (NEPA).

Bill Corcoran, western region campaign director for the Sierra Club’s Beyond Coal campaign, said the administration was attempting to prop up a failing industry by selling public lands for pennies on the dollar.

“This irrational action does nothing to reverse the coal industry’s market-driven decline,” he said. “This isn’t putting Americans first, this is putting corporate polluters first.”