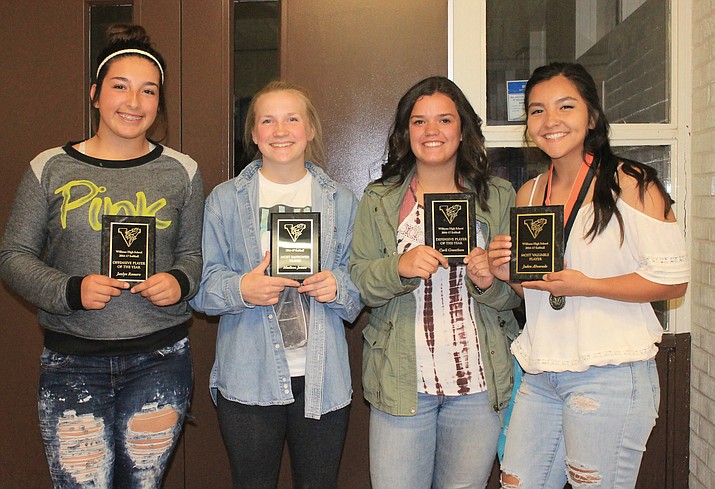 Williams High School softball player Jaden Alvarado was recently named to the 2017 Arizona Interscholastic Association 1A All-Conference First Team. Alvarado was also selected as the 1A All-Region Player of the Year.

Alvarado made the All-Conference list and joins several other Vikings on the 1A All-Region teams. Jazlyn Romero, Destinee Pennington and Rylie Heap were selected the 1A All-Region First Team as position players and Carli Grantham was selected to the team as a pitcher.

Jensen, Nayeli Salceda and Amaryssa Orozco were selected to the 1A All-Region Second Team as position players. Anna Chaney and Maegan Ford were given honorable mentions.

Alvarado, a catcher, had a .672 batting average in 19 games played. She had 39 hits and 40 runs which included five doubles, three triples and two homeruns. She had 43 RBIs.

1A Central Region coaches of the Year —Travis Grantham and Johnny Hatcher.

Romero had a .368 batting average witch 25 hits, 27 runs in 19 games played. She had 44 RBIs, three doubles, two triples and five homeruns this season.

Perkins had 69 put outs and 10 assists this season and had a .443 batting average in 24 games played.

Kramer had a 2.42 ERA in five starts this season. Lopez has a .324 batting average with two doubles, a triple and one homerun. He had 16 RBIs, 23 hits and 25 runs in 84 plate appearances. Ramirez was on the disabled list for half of the season but had a .258 batting average with one double. He had nine RBIs, eight hits and seven runs in 11 games played.

Of the players playing more than 20 varsity games this season, Grantham had a .362 batting average, followed by Brinkworth at .286, and Howell at .236.