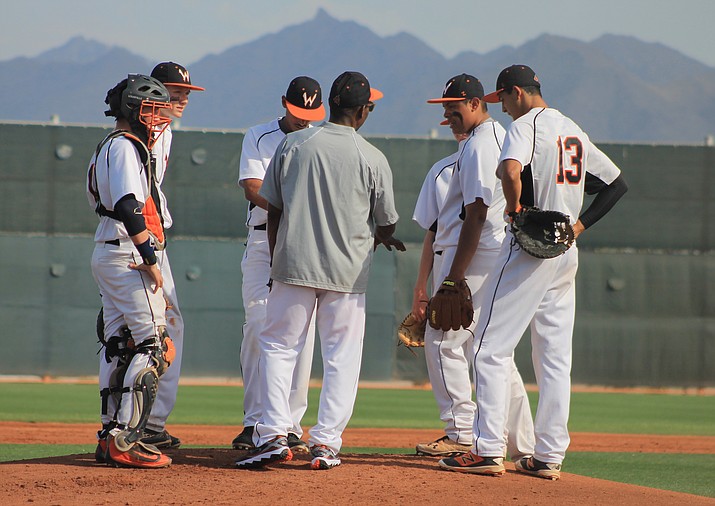 Coach Johnny Hatcher meets with the Vikings during the 1A state playoff game with Joseph City May 5.

The Lady Vikes confer with their coaches during an earlier season game with Joseph City.

Christian Ramirez attempts to pick off a runner at first base.

With the mercury topping 105 degrees at first pitch, the Vikings baseball team lost to 1A Central Region rival Joseph City 4-1 May 5 at Goodyear Baseball Complex. 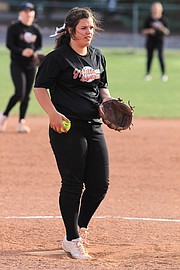 The ninth-ranked Vikings came into the game having defeated the eighth-ranked Wildcats and 1A Central Region Player of the Year Bryndon Buckley in a 6-0 shutout at home April 25 (after losing to the same pitcher April 4 in Joseph City). But Buckley prevailed in the rubber match, mixing in a higher percentage of off-speed pitches and striking out 13 Vikings hitters while limiting them to just two hits.

The Williams offense got off to a promising start when Payce Mortensen reached base on an error and promptly stole second. But

Vikings catcher Alex Howell gets a runner out at home.

Buckley was then able to coax infield pop-ups from Zack Perkins and Tate Grantham to extinguish the threat. The Vikings were also able to get a runner to third base in the third and fourth innings, but an inability to put the ball in play doomed those threats as well.

On the other side of the ball, Joseph City mustered all the offense they would need in a four-run first inning. Vikings starter Christian Ramirez, who shut out the Wildcats April 25, started well by striking out the leadoff hitter on four pitches. But then a hard liner that was mishandled at third base and a walk to Buckley brought the Wildcats’ big lefty first baseman Dylan Romero to the plate in an RBI situation. On the sixth pitch of the at bat, Ramirez left a ball over the middle of the plate that Romero drove to the right-center field gap for a two-run triple. Romero was later singled home on an 0-2 pitch that again caught too much plate.

The Vikings had a chance to get out of the inning without further damage, but the throw to first base on a dropped third strike was late, and an attempt to get the runner at third on a sacrifice bunt sailed wide to load the bases. Eight-hole hitter KJ Kinlicheenie then deposited a perfectly placed blooper into very shallow center to plate the Wildcats’ final run of the day. Ramirez struck out the next two batters to finally end the 36-pitch inning.

The Vikings’ defense tightened up after that, playing error-free ball the rest of the way as Ramirez was able to blank the Wildcats on just an additional 49 pitches. But the Vikings offense was unable to put a dent in the lead, never managing to get more than one runner on base in any inning.

The fifth inning started promisingly, with Angel Ayala working an eight-pitch at bat (including a hard shot down the left field line that was just foul) before grounding out to third. Carsten Brinkworth then reached first on a hit-by-pitch, but was thrown out attempting to steal second.

The Vikings scored their lone run of the day in the sixth inning when Tate Grantham drove a triple to deep right field and later came home on a wild pitch. Quinn Howell had the other hit for the Vikings.

The Vikings finished the season 7-3 in the 1A Central region and 9-4 in the 1A conference.

Despite beating the Joseph City Wildcats twice during the regular season, the Lady Vikes were stopped short in the second round of the state playoffs by the Wildcats.

Poor defense and a lack of hitting kept the Lady Vikings from progressing to the next round, said head coach Travis Grantham.

The Lady Wildcats beat the Lady Vikings 11-3 in Phoenix to close out the season.

The Lady Vikes finished the season 9-2 in the 1A Conference and 6-3 in the 1A Central region.

1A Central Region recognition for softball has not been released.