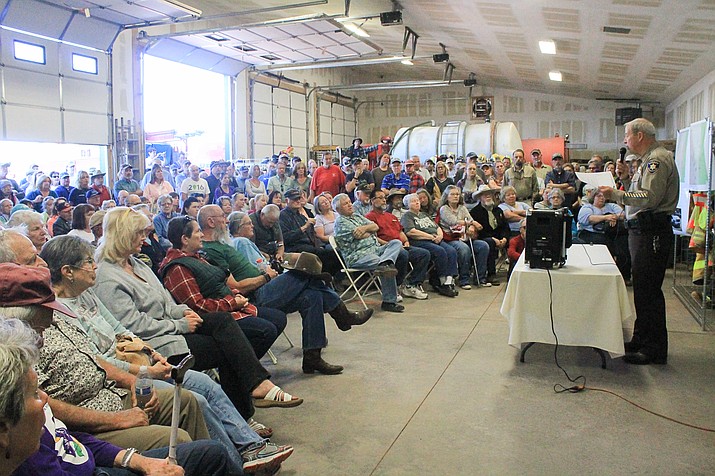 Sheriff Jim Driscoll announced today that an arrest has been made in the homicides of Williams residents Nora and Michael Dimuria.

Driscoll made the announcement at the 10 a.m. planned Red Lake community meeting with over 200 people in attendance.

According to Driscoll, on the morning of May 5, the Coconino County Sheriff’s Office (CCSO) received a tip from an area resident that a potential suspect was fleeing to Colorado.

As the Sheriff’s Office conducted interviews and worked with Colorado agencies regarding the suspect, the deceased couple’s 2006 Jeep Liberty was found near Dolores, Colorado.

Driscoll said the vehicle was found by community members who reported it as suspicious, without license plates and possibly abandoned.

“(The vehicle) was found by people who took enough time to say something isn’t right,” Driscoll said. “It didn’t fit the character of the area. It was along a river near Dolores.”

According to Driscoll, officers performed a pit maneuver on the suspect’s vehicle which caused it to roll.

The suspect, Grand Junction, Colorado resident, Derrick Shawn Barnett, 29, was arrested on outstanding Colorado warrants and is in custody in Montezuma County, Colorado. Driscoll said CCSO detectives were in route to Colorado to continue their investigation.

Driscoll said he is comfortable that this suspect is the suspect in the Red Lake double homicide from May 1.

“We are pretty confident that we have our guy,” he said.

After updating the crowd at the community meeting about the latest development in the Dimuria’s double homicide investigation, Driscoll answered questions about the homicides and the other burglaries that have recently occurred in the area.

Driscoll said at this time Randy Herrera is the only arrest made for burglaries that have occurred in the area. He said there was no indication that Barnett is connected with the recent burglaries.

“But it’s too early to say, we aren’t even in Colorado yet,” he said referring to the CCSO investigators travelling to meet Colorado officials.

Community members were concerned with the potential for more crime since many of Herrera’s friends and associates were still living in the area.

“We are still looking at a number of other suspects (in the burglaries),” Driscoll said.

However, Lieutenant Brian Tozer with Coconino County Sheriff said the number of reported burglaries has dropped significantly since Herrera had been arrested.

Members also asked if deputies could patrol more often and were worried about drug use in the area.

“We’re doing what we can,” Driscoll said. “Drugs are prevalent throughout our communities. I don’t think you have any higher levels than the rest of the communities in the county.”

Driscoll was asked why the homicide suspect, Barnett, had been in the area. He said the investigators have some ideas, but nothing definitive yet. He said they believed the suspect had been visiting the area over the last few weeks.

He said Barnett has an extensive criminal history in Colorado and has done prison time.

Driscoll said he was unable to answer questions regarding the possible motivation in the homicides at this point.

“It was a very disturbing crime scene,” he said. “Out of respect for the family and victims I will leave it at that.”

He also said he wasn’t able to say if there was a sign of forced entry. He did say other items were taken from the home besides the vehicle.

A resident asked if the crime was drug related.

“We’re not saying yet, but most of these situations have a connection to drugs,” he said.

Driscoll said CCSO has found no indication of there being a relationship between the deceased and Barnett.

A resident asked why information about the crime was not released until the afternoon of the homicides.

Driscoll said the department wanted to ensure that accurate information was released and did not want to panic community members.

“We want to understand facts first and then figure out the level of danger,” he said.

“We had to make sure there wasn’t anyone there, we had to secure the scene and we had to get information without destroying the scene,” he said. “We had people showing up left and right.”

Tozer said more information will be released as soon as it’s available.

Driscoll emphasized the importance of being observant but cautioned the community about begin vigilantes.

“We don’t want to create distrust in our neighbors or in anyone else coming into our community,” he said. “Be respectful and know your neighbors. If you see something unusual, report it.”

With the arrest of the suspect, Driscoll did not believe that residents need to be overly cautious.

“We are comfortable that we have our suspect,” he said. “People’s awareness needs to always be up, but there is no greater level of concern now than there was before.”

The CCSO was assisted by the Arizona Department of Public Safety, Williams Police Department, the FBI, the Department of Homeland Security and the U.S. Marshals Service to gather tips and evidence on the case.