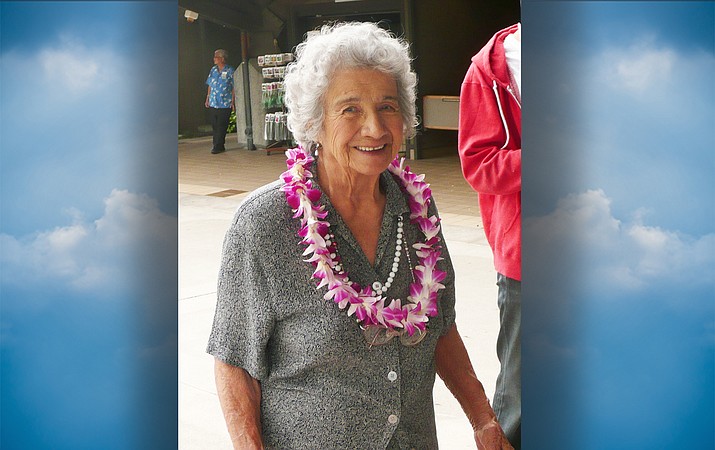 Our mother Agapita (Aggie), aged 96, died peacefully on April 18, 2017 at her home in Williams with her daughter Josephine Bustillos by her side.

Aggie was born May 19, 1920 in Williams, to John and Josephine Avelar.

She had two siblings Frank and John Joe Avelar and true to the Mexican custom her mother raised nine nieces and nephews, sons and daughters of sisters who proceeded her mother in death.

She went to school in Williams and after only completing the 11th grade her mother had her go to beauty school in Flagstaff. Where she got her license and she became a beautician in Williams. She worked in one of the local beauty shops for Myrtle Smart.

She met and married her husband Fred Bustillos in 1942 and they gave birth to their first child Fred Jr in July 1946. They had their second child Leonard in February 1949 and their third child their daughter Josephine born in February 1958.

While raising her family she not only ran her beauty shop which she opened out of her own home with her dear friend Alice Larson, in the evenings she ran a Mexican food restaurant called the El Sombrero. After five years of running the restaurant she decided it was time for a change. Her husband Fred opened a gas station in the town of Tusayan and she and her daughter Josephine moved to the small community until Josephine graduated from high school. Aggie opened a small salon in Tusayan and also cooked Mexican food part time at one of the local establishments.

Aggie and her husband Fred then moved to Phoenix for a very short period of time and then returned to Williams where she resided until her death. She loved Williams. She worked for the Forest Service for a short period of time and then went to work at the Williams Visitors Center. She ended her working career at the Williams Visitors Center where she worked for Public Lands Interpretive Association for 17 years. She loved her job and the people that she worked with.

She was not only known for her talents has a beautician but for her amazing cooking skills. Through the years, she taught herself how to crochet and knit and in her late 80s learned how to paint, something she had always wanted to do and she was amazing at it. At the age of 94 she even did the zip line.

She had a green thumb and loved to garden and it was one of her favorite things to do. She got to travel and got to go to Hawaii which had been a lifelong dream of hers.

Aggie is survived by her son Fred and wife Pam of Las Vegas, her daughter Josephine from Williams, and all her grandchildren and great grandchildren and her cousin Florencio Levario of La Brea California and a number of other relatives.

She was the matriarch of our family and will truly be missed.

“Mom, you will always be in our heart, because in there you are still alive.” Aloha

A celebration of life will be held Tuesday, June 20. Services will be held at St. Joseph’s Catholic Church in Williams. Time will be posted closer to the date.

In lieu of flowers, donations can be sent in her name to W.A.G.G (Williams Animal Action Group) or SAVE-MTR (Meant to Rescue)