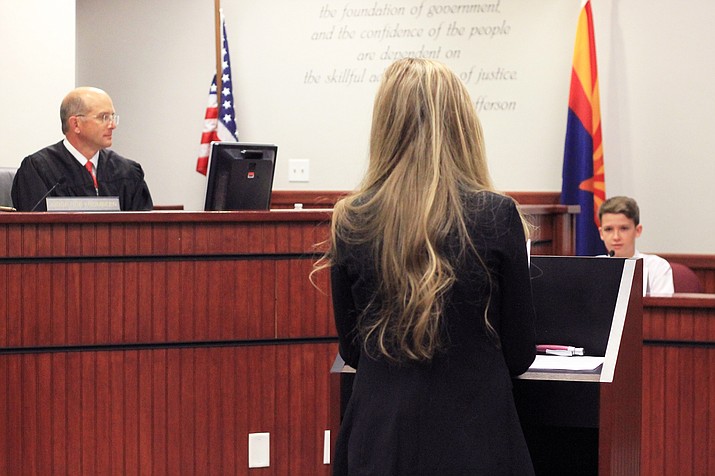 A Flagstaff homeschool student explains an exhibit to a witness during the mock trial April 26 at Williams Municipal Court.

However, these students were not facing charges. Instead they were participating in a mock trial in which Krombeen served as judge for the occasion. The event was held in the Williams Municipal and Justice Court building.

Homeschool student Tori Maebe listens to testimony and jurors look on during the mock trial.

“I was so impressed with the level of preparation and professionalism with these students,” Krombeen said about those who participated in the mock trial. “I had no idea that it was going to be done so well.”

The students are all enrolled in Classical Conversations, a homeschool curriculum. As part of the Challenge B classes, which is the equivalent to eighth-grade in most schools, students are required to study legal terminology for a semester and to participate in a mock trial event.

Four homeschool groups participated in the event including students from Williams, Flagstaff, Winslow and Las Vegas. On the afternoon of April 26, students competed against each other in a two-round event in which each team had to present the side of the plaintiff in one round and present the side of the defense in the second round. Students played the roles of attorneys, witnesses, defendants and bailiffs. Members of the Williams community played the roles of jurors.

Mock trial is a competitive murder trial reenactment for junior high students. They research and act out roles of the prosecution, defense, witnesses and accused. They practice the parts, build their case and then perform in a mock courtroom in front of a jury of volunteers with a real judge or lawyer presiding.

The curriculum includes a mock trial to utilize critical thinking, logic, research and drama. The program encourages students to reason for themselves on whether the defendant did or did not commit a crime. It is also an exercise in building an opinion based on facts and defending that opinion in a room full of people.

According to Flagstaff parent Susan Finney, the students are following the Classical Conversations B Challenge curriculum, which is the equivalent to a public school eighth or ninth-grade program.

Readings, discussions, logic studies, and writing assignments are designed to help students become aware of biases and faulty reasoning, which help the student become a smart consumer of information and a wise leader.

In the second semester, students are asked to put into practice all the skills they gained in the first semester by participating as a team in a mock trial before a judge and jury. When they argue their case, students rely on their own preparations and teamwork.

According to Flagstaff parent-leader Susan Finney, the curriculum has a general theme that is woven together through the various subjects.

“Everything just builds wonderfully upon itself,” she said.

Finney said the students have been working toward the mock trial all semester. She said the first few weeks focused on rules, terminology and court procedure. She said each student was encouraged to work on every roll in the mock trail process.

“They essentially memorized the book,” she said. “They wrote out in their own words the witness statements and them memorized them.”

Finney said the mock trial is an accumulation of two years of debate and research practice.

“It is active rhetoric, the ability to speak and explain your ideas clearly and that’s what we are trying to get our students to do,” she said, “not just have the idea of the client is innocent or guilty, but being able to articulate that.”

Krombeen said the court was pleased to participate in the mock trials and to help the community in educating the children.

“For us it’s a way for the court to connect to the community and help them to better understand the courts and the court experience,” he said.

Krombeen said he was also impressed with the preparation and research the students put into the event.

“I helped judge the Regional Mock Trial Championship in Flagstaff a few years ago and these students, who are only eighth and ninth-graders, were on par with the best teams I saw there,” he said.