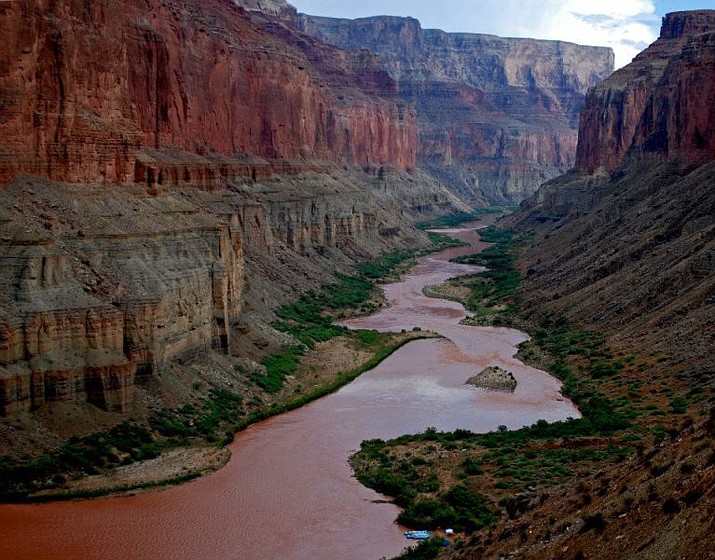 Current vegetation along the Colorado River.

FLAGSTAFF, Ariz. — Decreases in river flows and frequency of flooding with future climate warming will likely shift vegetation along the Colorado River in Grand Canyon to species with more drought-tolerant traits, according to papers recently published in "Ecology and Evolution" and "Wetlands."

What this means for Colorado River recreationists is that plants with traits that confer drought tolerance — mesquite, tamarisk and desert grasses — may replace water-loving plants such as native willows, rushes and cattails.

The findings are based on the analysis of reproductive, structural and physiological traits in 110 plant species that commonly occur along the Colorado River. Researchers from Northern Arizona University, U.S. Geological Survey and USDA Forest Service used the results to understand plant adaptations to flooding and drought.

“Our research shows that plant species exposed to frequent flooding have a different set of traits than plant species that grow above the river on drier sites,” said lead author Miles McCoy-Sulentic, a recent graduate from NAU’s School of Forestry.

Stem tissue density was found to be an easily measurable trait of drought tolerance for both woody and herbaceous plants. Plants with high-density stem tissue are more drought tolerant. Additionally, frequent flooding selects for plant species with traits that promote survival of inundation, such as thin leaves and low-density stem tissue. By contrast, infrequent flooding and drought stress select for species with traits that promote water stress tolerance, including large seeds, thick leaves, dense stem tissue and high efficiency of water use.

The findings provide strong evidence that hydrological conditions along the Colorado River in Grand Canyon influence riparian community plant cover and functional traits. Dryer conditions are likely to result in a shift of riverside vegetation to species with more drought tolerant traits.

“This project is another example of the fantastic research opportunities available to NAU graduate students,” said Tom Kolb, who is a professor in the NAU School of Forestry affiliated with the Merriam-Powell Center. “Our graduate students have opportunities to work in amazing research settings such as Grand Canyon to develop the professional skills they will need in the future.”