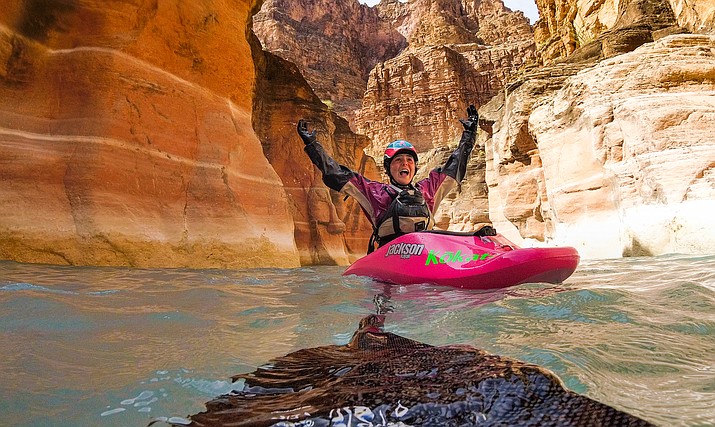 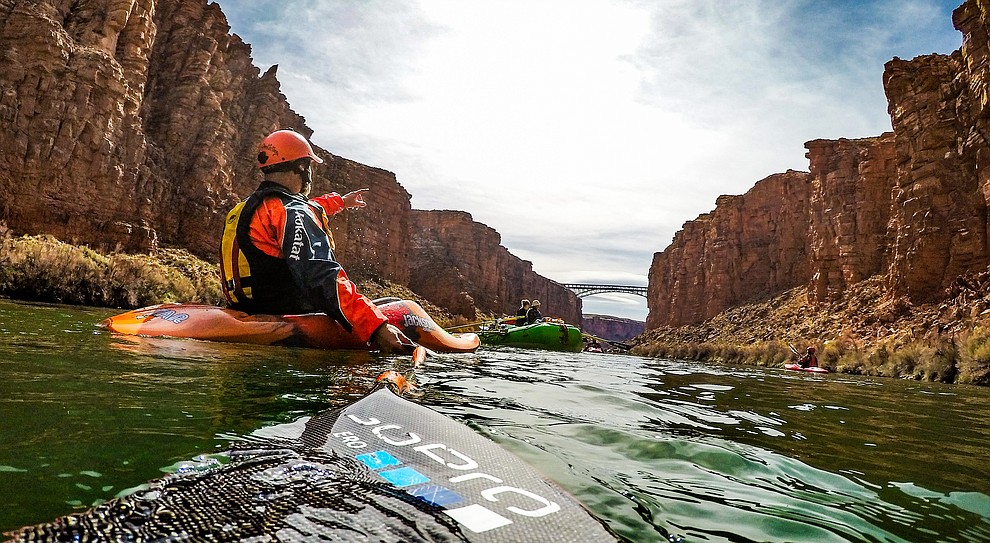 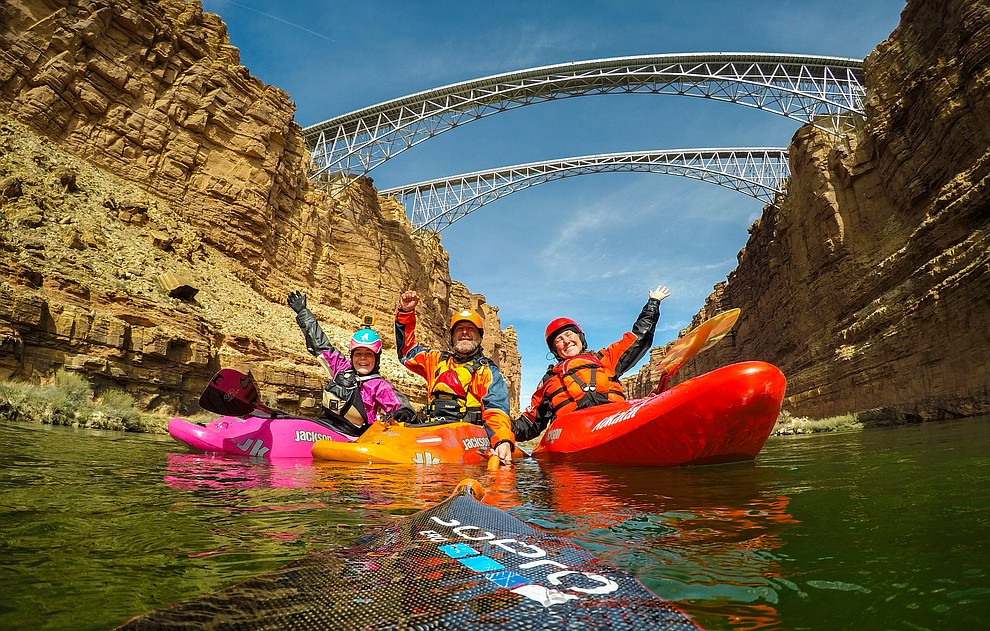 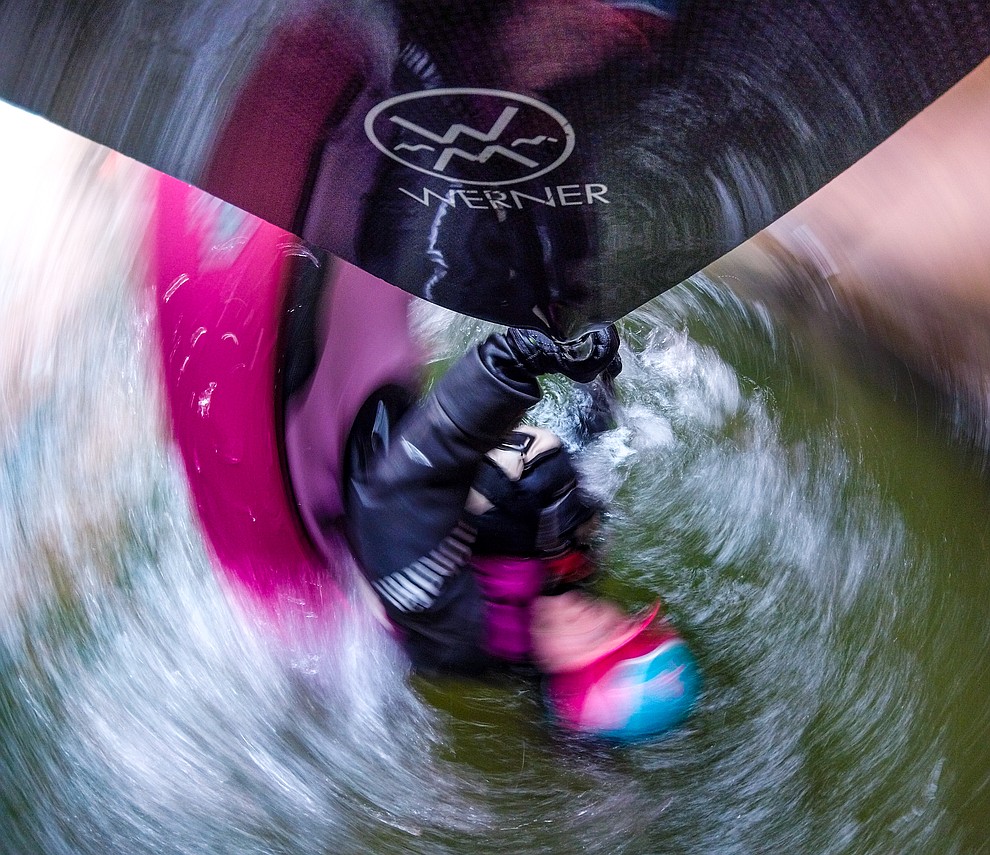 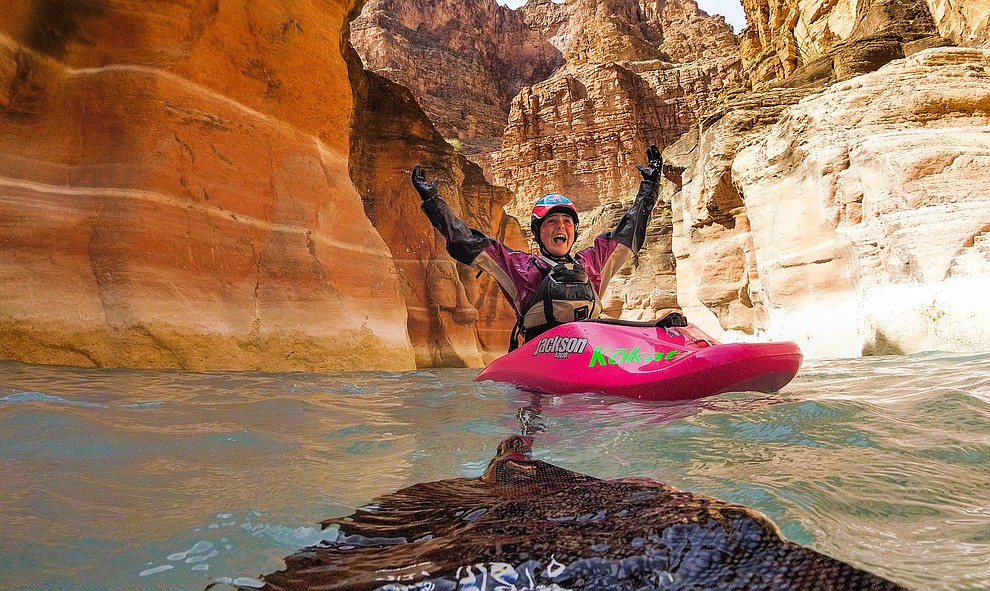 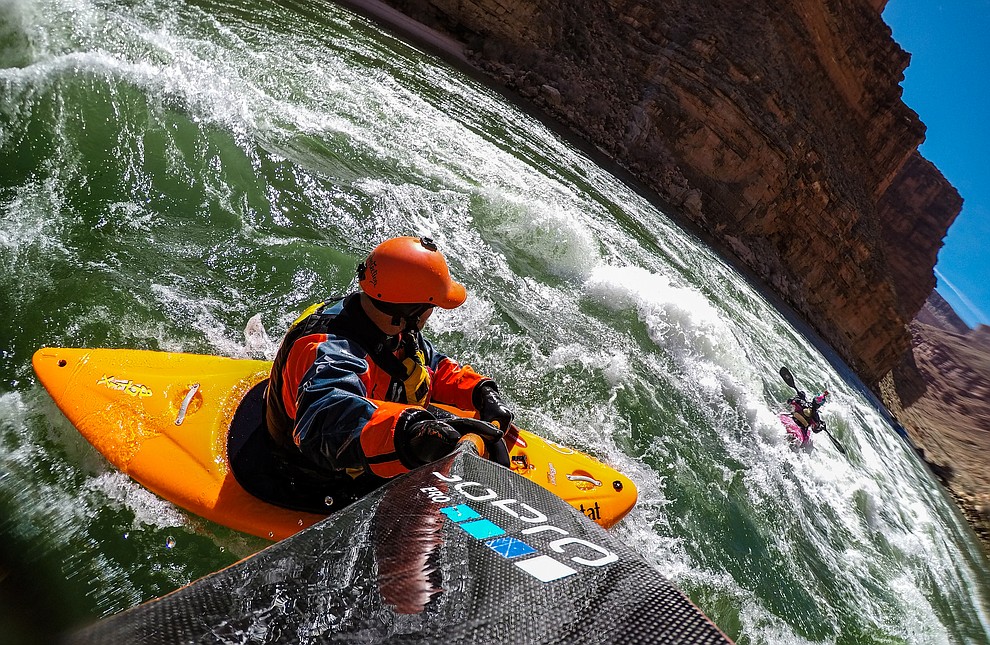 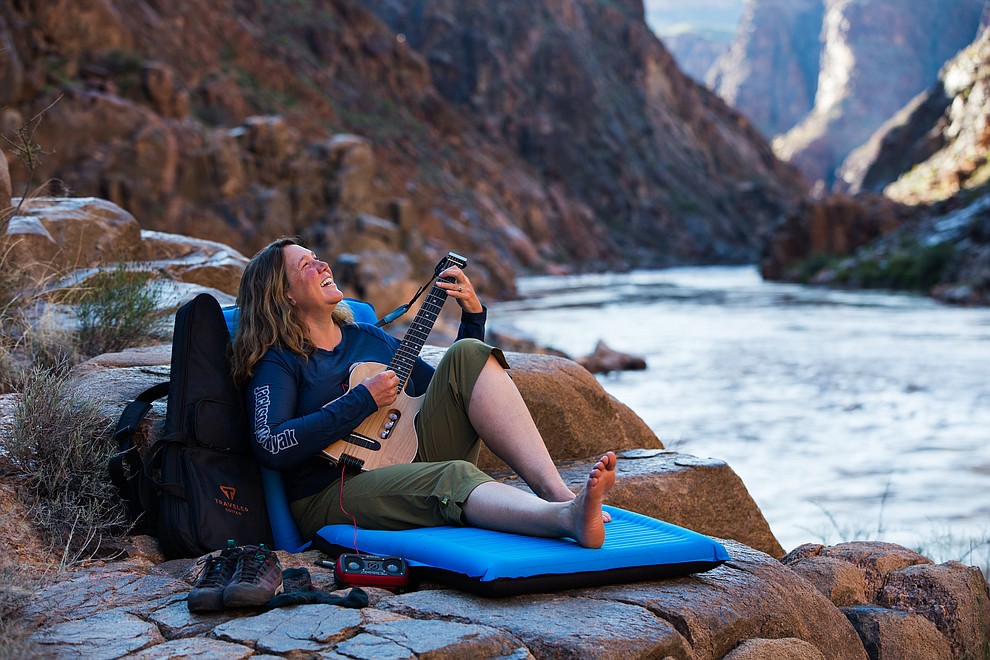 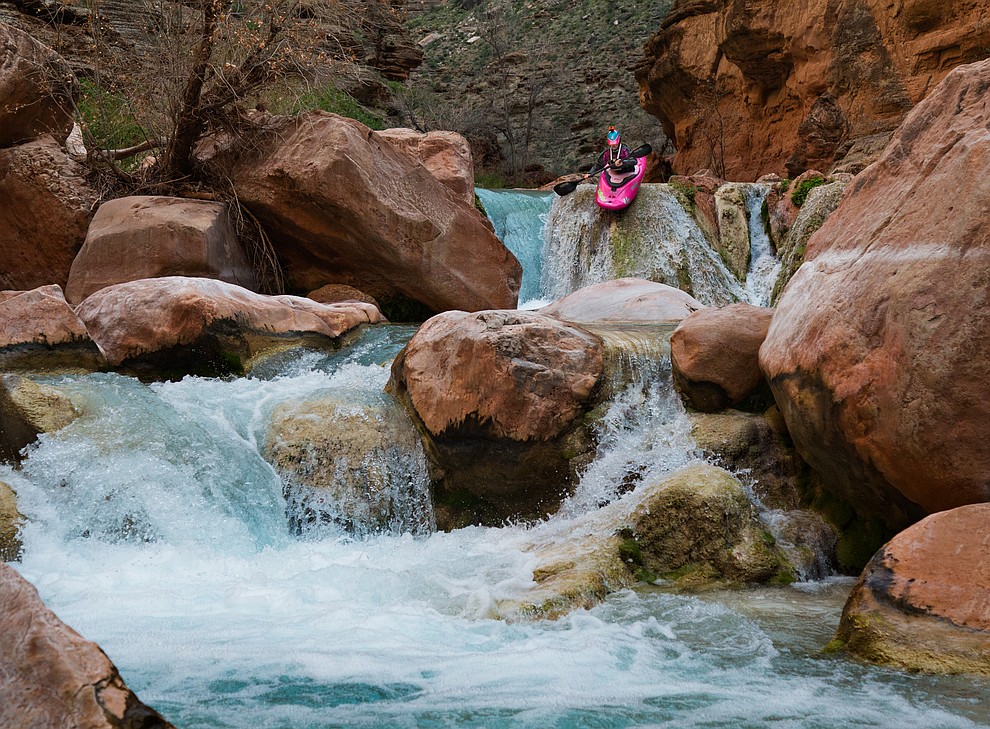 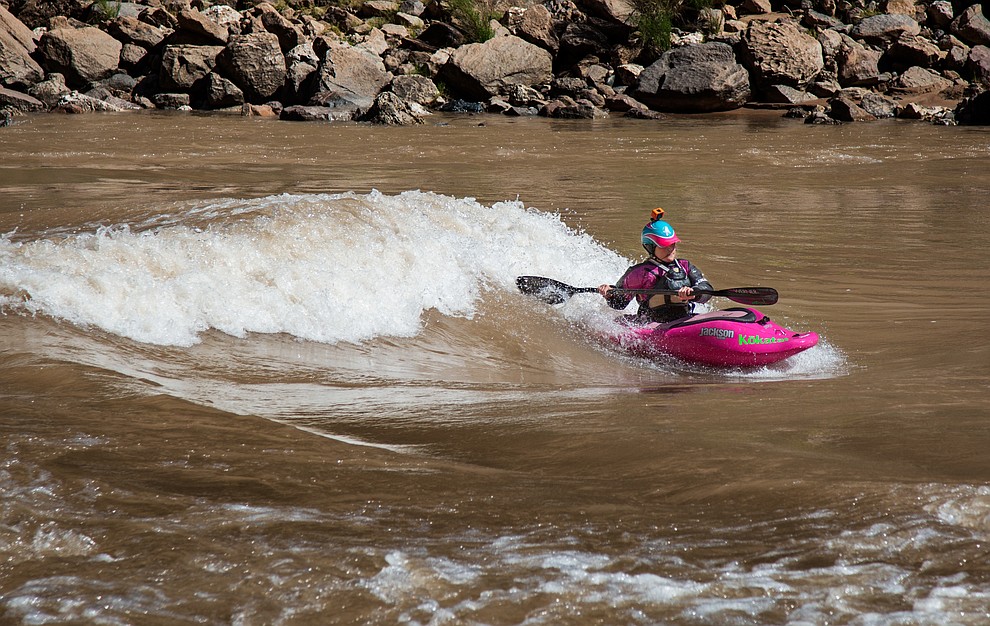 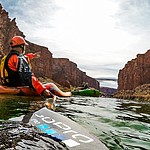 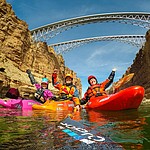 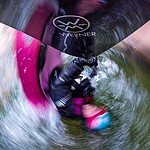 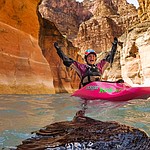 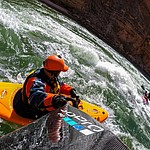 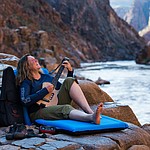 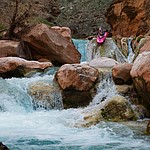 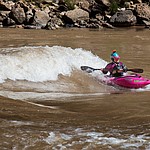 That is far from the truth. In late March 2017, 12-year-old (yes, that’s right, 12) Abby Holcombe paddled a pink Jackson Kayak Rockstar XS kayak from Lee’s Ferry to Pearce Ferry. Abby’s Rockstar is five feet two inches long, and if Abby tries really hard, she can just about reach both ends of the boat at once.

Abby grew up in a paddling family, can hold her breath for a full minute, and had her kayak roll by the time she was seven.

Going into the river trip, Abby was already the Junior Women’s Freestyle Kayaking National Champion. Like the others before her, Abby grew in skill and confidence as the river trip proceeded.

“The Roaring Twenties were awesome,” Abby said, and by Phantom Ranch, 88 miles into the 280-mile journey, she thought maybe she could paddle the whole Canyon.

Still, she told herself she would walk Lava Falls if it looked bad, even though “I really wanted to paddle the whole thing.”

Meanwhile, her parents were thinking the same thing.

While Horn Creek was also “awesome,” Granite was the first real challenge. Abby had tears in her eyes on a very sobering scout, thinking hard about the rapid before she gave it a go, ending up running the right side. After rolling at the top, Abby rolled again near the bottom and stayed under for ten seconds while her parents anxiously watched. “It was not the line I wanted but I made it through fine. I was almost so scared that I messed it all up.”

That was the first big combat roll she had done the entire trip and from there on Abby knew she would be fine, given her skills. “It was a pivotal moment. She was a different kid on the water after that,” noted Abby’s mom.

In Lava, Abby ran the same line Ria had run, down the right side cutting left. At this point, Abby knew she could paddle the entire Canyon. She refused to get out of her kayak as the group floated along at lunchtime, and paddled 30 miles the last day. “I was so tired when we got to the take-out. I paddled to shore and I was so excited, I felt so good to finish something and get it completely finished.”

Kids in Grand Canyon go way back. Twelve-year-old Bruce Wilson had his birthday in Grand Canyon on a river trip in July 1942. The other river runners on his trip sang ‘Happy Birthday to You’ as they ran Grapevine Rapid.

Fifteen-year-old Priscilla Ratican rode with her uncle in his dory on 126,000 cubic feet per second; she’s the youngest woman to run the highest water in Grand Canyon on June 12, 1957.

Robin Segerbloom was 19 when she, her 15-year-old brother, 19-year-old Buzzy Belknap, and four adults got in tiny one-person sportyaks and paddled from Lee’s Ferry to Phantom Ranch in 1963. They paddled a lot of flatwater and portaged a lot of rapids as the river was running at 1,500 cubic feet per second because of Glen Canyon Dam stopping the normal river flow.

And then there are the kids in kayaks. While we clearly don’t know with certainty who was the youngest or the first child to paddle into the Colorado River at Lee’s Ferry, here is a recounting of just a few of the amazing children who are enjoying running the Colorado River through Grand Canyon with friends and family.

Seven-year-old Sage Donnelly, traveling with her mom and dad, traversed the Grand Canyon in 16 days with friends in June 2008, going from Lee’s Ferry to Diamond Creek. Sage had already been downriver racing and had a good roll, where she could stay in her boat and be upside down in the water before righting herself.

Sage rode with her mom some in the rafts when there was a lot of flatwater, but she paddled her playboat through all the Class 7 rapids and a few of the Class 8’s. The hardest part of the trip for Sage’s parents was keeping Sage’s insulin cold in the raft coolers, as Sage is a Type I diabetic. Sage’s mom noted “We don’t believe in pushing, but encouraging and building on a strong foundation.”

Sage went on to become the top US Slalom Junior Champion when she was 12, the top US Junior Canoe and Kayak Female Slalom Paddler, and at 16 is the current Junior Women’s freestyle World Champion.

Thirteen-year-old Ria Sribar won the European Cup Association Junior Canoe Slalom in Bratislava in the summer of 2016. At 14, she is now training to compete in the US Junior Team trials in Charlotte, NC, in April. But in 2014 when Ria was 11, she paddled from Lee’s Ferry to Diamond Creek in her slalom kayak.

Of that trip, Ria’s father noted “the Grand Canyon trip was a turning point for her. She overcame most of her fears in the Canyon, and truly excelled after that trip.”

Ria traveled with two seven-year-old girls that were on the Grand Canyon river trip. On the way, the kids (and adults) played, hiked, camped and swam in the water.

To all the moms, dads, and kids who have paddled Grand Canyon, and to those who are yet to attempt the trip, Abby has some advice. Like the adults, it might take some crying at the top of Lava Falls, “but eventually you will come around, maybe you will see the line and maybe you won’t, but you can do anything as long as you set your mind to it.”

While there may be some good natured competition for these small river runners, Ria’s father noted the kids and their parents are out to have fun, and that “hikes with the kids were as memorable as the river running’”

All photos submitted by Peter Holcombe.