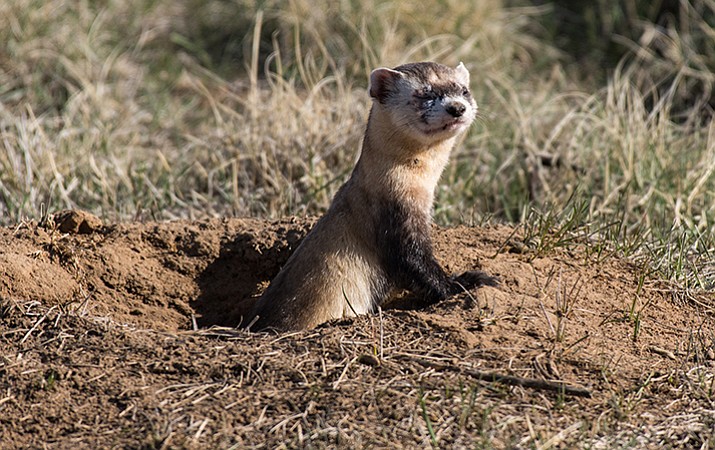 The black-footed ferret is critically endangered, partially due to the eradication of prairie dog habitat, which the rely on for survival.

The Mexican spotted owl was listed under the Endangered Species Act in 1993 and remains on the list 24 years later.

The Southwestern willow flycatcher is threatened by a vanishing riparian habitat.

GRAND CANYON, Ariz. — The Grand Canyon is home to one of the nation’s most biologically diverse on the North American continent, hosting five of the seven life zones within its 8,000-foot elevation change from rim to river.

However, because of the changing environment, by both manmade and natural processes, many of the region’s species have become threatened or endangered, some for as many as 20 years. The Museum of Northern Arizona hosted the third in a series of Future of the Colorado Plateau forums April 26 to address the plights of a few species on the endangered list and some of the ways conservationists are trying to rehabilitate their population.

Shaula Hedwall, a U.S. fish and wildlife service biologist, said that the Mexican spotted owl has been on the endangered species list for almost 25 years — since 1993. Hedwall said the Mexican spotted owl depends on old growth forests, and because of forestry management practices, saw its population decline significantly through the early 1990s.

Loss of old growth forests to logging, fire and development have dropped the number of the birds to just over 2,000 in the United States. Mexican spotted owls are also facing threats from barred owls, who are encroaching into their territory, and low reproduction success rates in the wild. Climate change could also continue to have an effect, since the birds depend on adequate amounts of rainfall to boost vegetation growth and in turn the amount of prey available for owls to feed on.

Hedwall said the listing of the species forced federal agencies to address their forestry management systems — the result of which has been a positive focus on overall forest health instead of many singular approaches.

While it’s too early to predict the species’ long-term survival prospects, Hedwall said the comprehensive forest management plans now in place is a good start.

Southwestern willow flycatchers are a fairly unremarkable little bird, according to Mary Ann McLeod, but their dwindling numbers are indicative of the loss of riparian habitats throughout the region. The small, brown and white birds thrive in dense, low-lying wetlands, nesting in the invasive tamarisk trees.

“If you’re in a wet area, knee-deep in mud, you’re probably looking in the right place,” McLeod said.

Warmer summers, less flooding from the Colorado River and its tributaries and groundwater pumping has led to a drastic decline in riparian areas, leaving less space for he flycatchers to nest and less area for them to forage. Riparian habitats also depend on the floods to mitigate fire risk.

The black-footed ferret was thought to be completely extinct in the area until a small, limited population was located between Williams and Flagstaff in 1986. Black-footed ferrets depend almost exclusively on large populations of prairie dogs to survive.

Al Eiden, a game and fish officer who works with the ferrets, said prairie dog habitat destruction by humans is the number one threat to the black-footed ferret species. A ferret can eat nearly 100 prairie dogs per year, and because they live in colonies, require at least 10,000 acres of prairie dog habitat for successful long-term survival. Not only do the ferrets prey on prairie dogs, they also use their burrows for shelter and to raise their young.

Very few such areas of prairie dogs remain, because of development and a social view of the animals as undesirable, Eiden said.

A captive breeding program was instituted in 1986 to save the species, and has since been considered successful. While only 18 ferrets remained in the wild then, today there are around 300, with another 300 in captivity until they can be released into their own colonies.

Designated areas near Seligman and Aubrey Valley have been successful, and game and fish officials believe the population are close to being or already are self-sustaining.

“This is proof that we can help these species,” Eiden said. “Through partnerships, we’re able to combine our efforts and our funding to make sure this gets done.”