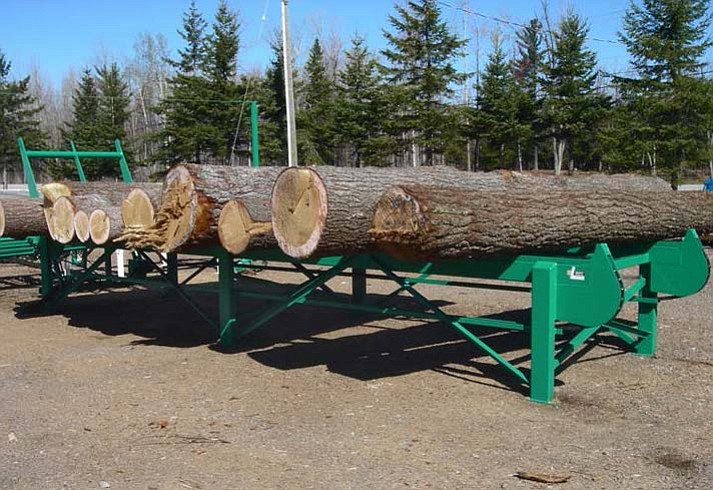 A merch line such as seen in this photo will be used at the site south of Valle.

A debarker similar to this one is will be used at the proposed wood processing mill south of Valle. Lumber materials from the 4FRI forest thinning projects will be stored in large open yards on the property and processed by machinery both inside a large existing structure and outside in open air on site. Finished product would then be shipped off the property to customers on State Route 64.

Coconino County Planning and Zoning is planning a public hearing March 29 regarding a Temporary Use Permit (TUP) request for a 40-acre wood processing facility south of the Grand Canyon near Valle.

Ordean entered a strategic partnership with GEPAZ in 2015 to produce a line of enriched soil products to be sold and distributed throughout the Southwest. Flagstaff-based Roots became part of Good Earth Power Soils, Ltd., the soils and bagged goods division of GEPAZ.

The proposed mill site lies near Valle, between Williams and the Grand Canyon.

A press release in 2015 stated Roots Composting planned to expand the composting operation to a 37-acre site in Williams, where GEPAZ planned to build a mill and processing facility.

In the proposal, Ordean states that lumber waste materials from 4FRI thinning projects will be stored in large open yards on the property and processed by machinery both inside a large existing structure on site and outside in open air. The finished product would then be shipped off the property to customers.

The company states between 50 and 150 truck trips per day could be generated by the use. Waste materials such as wood chips and wooden poles would come to site from 4FRI thinning operations in the area and the finished products will be shipped out.

The proposed mill site is at a former APS substation.

The application states that trucks would enter the northwest property corner and unload “large” amounts of logs that would be stored at a log deck. From the log deck, machinery would pick up and load the logs onto conveyor belts that would run them through an outdoor industrial debarker machine where bark would be separated from the logs.

Logs would then be cut to specific lengths by large outdoor industrial saws and bark would be placed into a large hopper that feeds into an industrial wood chipper or stored. Finished wood chips would be bagged and stored on the northern portion of the property. Finished poles would be stored in large metal shipping containers or on the ground for later transportation off site.

After three years, the company plans to apply for a Conditional Use Permit for a more permanent use of a Lumber Mill. GEPAZ’s contract with 4FRI is for six years.

The company plans to use the facility ten hours per day on a year-round basis and have up to 15 employees working at the plant.

The property was historically used as part of a cola slurry pipeline that stretched from Black Mesa on Navajo Nation land to the Mohave Generating Station in Laughlin, NV. Existing steel structures, a large drainage area and concrete-lined basins were used in association with the pipeline. When Mohave Generating Station closed in 2005, a portion of the property was used as an APS substation.

On March 2, Zach Schwartz of Coconino County Planning and Zoning Commission alerted the owners of 75 properties within a 5000-foot radius of the plant of a meeting to be held March 10 to answer questions and listen to a presentation about the proposed use. Six members of the community attended.

In the Citizen Participation Plan Report created after the event, Schwartz stated the number one concern from the community was the impact the operation would have on traffic congestion and safety. Other concerns included light, noise and air pollution that would affect local residents. The impact of home values was also a concern as well as quality of life for those residents. Several stated they moved to the area for the abundance of wildlife, quiet and dark skies.

Ordean replied to these concerns stating a traffic statement was submitted to Arizona Department of Transportation for the truck use. He said external lighting would be compliant with Dark Skies Ordinance and that the company planned to put a small enclosure around the wood chipper to reduce noise. He said the company plans to obey all laws and use best practices to minimize the impact on the environment.

The public is invited to attend a public hearing regarding the proposed TUP on March 29 at 5:30 p.m. in the First Floor Board of Supervisors Meeting Room at 219 E. Cherry Ave., Flagstaff, AZ.