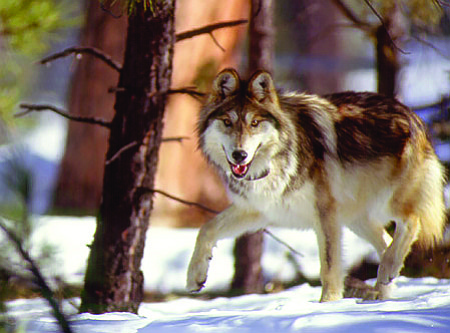 USFWS conducted a survey from Nov. 2016 through Feb. 2017 in which the agency reported gains in the experimental Mexican wolf population in Arizona.

PHOENIX — The success of Mexican wolf recovery across Arizona and New Mexico hinges more immediately on maintaining social tolerance than on genetic diversity, according to a recently published peer-reviewed study.

The study was published in Biological Conservation, a leading international conservation science journal. In it, the authors, which include Arizona Game and Fish Department biologists Larisa Harding, Heffelfinger, Esther Rubin, Jeff Dolphin and Anis Aoude, conclude that maximizing genetic diversity in Mexican wolf recovery must be strategically balanced against impacts and concerns from local communities or the entire recovery program might be compromised.

“It has become increasingly evident that recovery of Mexican wolves will need to consider and weigh both the social concerns voiced by local communities and the numbers of wolves required for sustainable populations in the wild,” the study states.

The authors state that “cross-fostering” – a technique where captive wolf pups are placed into a wild-born litter of the same age to be raised in the wild – is a viable means for increasing genetic diversity in the wild Mexican wolf population. The practice has also proven successful and helps to reduce potential wolf-human conflicts.

Earlier this year, one of two wolf pups placed into the wild Dark Canyon Pack in 2014 produced wild offspring of her own and a second cross-fostered pup is now paired with a mate.

"Science has proven that cross-fostering young pups works,” said Jim deVos, assistant director of wildlife management for the Arizona Game and Fish Department. “Cross-fostering allows us to place pups that haven’t yet been habituated to humans to increase the chance that they will grow up to reproduce in the wild, which will contribute to greater genetic diversity.”

This is significant because some advocacy groups contend that the best solution to wolf recovery is to simply release additional captive-raised adult wolves into the wild.

While that could increase genetic diversity, the study shows that captive wolves are more habituated to humans and thus are prone to getting into conflicts, which erodes public support for the wolf recovery program. The inexperience of captive-raised wolves reduces their overall survival and limits their ability to pass their genes on to the next generation.

Equally important for the success of the overall wolf introduction effort is social tolerance of the reintroduction program. Of the 124 documented Mexican wolf mortalities from 1998 to 2015, 53 percent were attributed to illegal shooting and trapping of the animals. In 2016, U.S. Fish and Wildlife Service has confirmed 14 wolf deaths, most of which are still under investigation.

“Despite the illegal shootings, it is clear the Mexican wolf population is well on its way to successful recovery with an average annual population growth of 20 percent since 2009, a rate similar to the first 10 years of successful wolf recovery in Yellowstone National Park,” said Jim Heffelfinger, AZGFD wildlife science coordinator and co-author of the study. “Genetic diversity is important to any endangered species, but illegal killing and lack of social tolerance is what is holding Mexican wolf recovery back, not lack of genetic diversity.”

It has become increasingly evident that any Mexican wolf recovery effort requires acknowledging social concerns to reach a sustainable population of wolves in the wild.

“Cross-fostering will continue to play an important role in adding genetically valuable animals into the overall wolf population,” deVos said. “Experience has shown us that this not only lessens the possibility of negative wolf-human contacts, but helps to advance genetic diversity into the recovering population.”