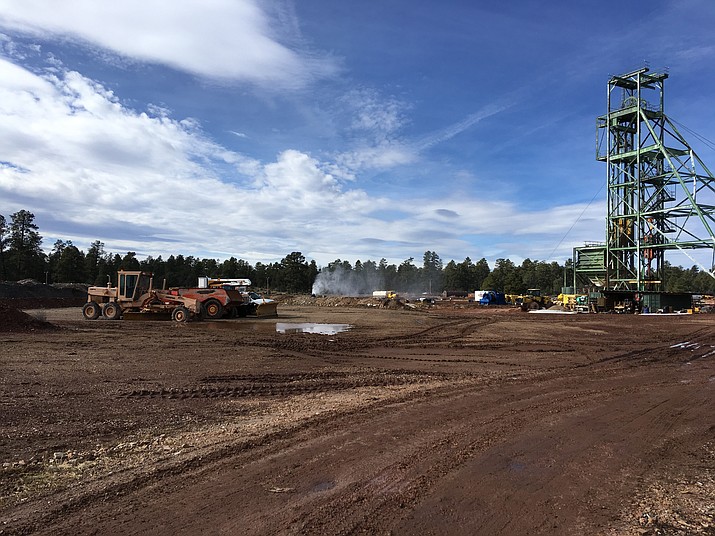 Excess water containing dissolved uranium is being sprayed into the air in an attempt to evaporate the water. A wet winter has caused the mine to fill with water beyond the capacity of its holding tanks. 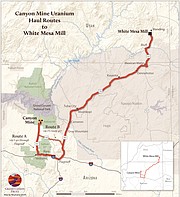 Energy Fuels is transporting excess water from Canyon Mine to its processing facility near Blanding, Utah. The Navajo Nation has laws forbidding transport of radioactive materials within its borders, but it has no jurisdiction over the state roads used by the company.

GRAND CANYON, Ariz. — Although no uranium ore has been officially hauled out of Canyon Mine, conservation groups, as well as the Havasupai and Navajo tribes, recently reiterated their concerns about radioactive contamination after learning a wet winter left the mine facility water-logged.

Canyon Mine is located in Kaibab National Forest, about six miles southeast of Grand Canyon National Park. According to Forest Service spokesperson Jacqueline Banks, high amounts of winter snow and rain, as well as low evaporation rates, caused excess water to accumulate in the mine shaft. Banks said the shaft also pierced a perched aquifer, which initially drained a large amount of water into the mine shaft.

Pumps are used to evacuate the water from the mine shaft, but the holding ponds onsite don’t have capacity to safely contain all of it. To bring holding pond levels down, Energy Fuels is spraying the water into the air to aid in evaporation, and trucking it to the company’s uranium processing facility near Blanding, Utah.

Conservation groups and two area tribes, however, say the practices are unsafe.

After visiting Canyon Mine March 18, Sierra Club’s Alicyn Gitlin claimed that water being sprayed over the holding ponds was drifting into the nearby national forest. Gitlin also questioned whether any contaminated water from the mine shaft had made its way into the groundwater system, which feeds the seeps and springs in the Grand Canyon and provides water for the nearby town of Tusayan.

“This is unacceptable and just confirms many of our concerns about this mine, she said. “Now the shaft of the mine has been flooded and they had to develop a contingency plan before they’ve even started removing ore. They’re putting the water of the Grand Canyon at risk.”

Curtis Moore, vice president for marketing and corporate development at Energy Fuels, said in an e-mail that water being disposed of contains anywhere from .04 to .09 parts-per-million. That’s about three times the amount the EPA considers safe by drinking water standards. It also contains about 30 times the acceptable amount of arsenic, according to report Energy Fuels presented to the Arizona Department of Environmental Quality (ADEQ) last November.

Moore also said misting the water to speed evaporation is a common industry practice, but the company decided to shut off the devices on windy days to alleviate concerns.

“The excess water we are managing is relatively clean, and contains only trace amounts of natural uranium,” he wrote. “We are not blowing water into the forest, as the Sierra Club claims.”

Beyond the mine’s property boundaries lies more than just the national forest. The mine sits in the shadow of Red Butte, a site considered sacred to the Havasupai Tribe and one designated as a Traditional Cultural Property by the Interior Department. The tribe contends that they are no longer able to travel to the meadow below Red Butte to perform their traditional ceremonies and gather medicinal plants because of hazards created by the mine.

Further north, another tribe is also expressing its concerns about Canyon Mine’s excess water problem — the route used by Energy Fuels to truck the water to its processing facility at White Mesa Mill travels through hundreds of miles of the Navajo Nation. Although the Nation has a law that expressly prohibits radioactive material on any of its lands, there is little the tribe can do when the trucks are traveling on state roads.

Leona Morgan, founder of the non-profit organization Haul No!, said the communities along the haul route — which is approximately 300 miles, more than half of it through Navajo Indian Country — were not notified that the trucks would be hauling radioactively contaminated water.

Trucks used to haul the water don’t identify the company, and simply have placards indicating the material contained within is “non-potable water.”

“We have a right to know, at the very least, so proper preparations and emergency responses are in place in case of a spill or accident,” Morgan said in a statement.

According to Morgan, roads on the Navajo Nation are not always well-maintained – potholes, ditches or wandering livestock could cause an accident or a spill, leaving the surrounding communities vulnerable to health hazards they were not even aware of. It could take several days to mobilize and emergency response team to the more remote areas.

“If we can’t stop it, we’d like to see better protective measures paid for by the company, or by the state and federal government,” she said. “It’s really hard to say we want them to re-route it, because then it’s just going to go through another community.”

Navajo communities have been dealing with the harmful effects of pollution and radioactive material for decades, most recently when a spill at Gold King Mine dumped millions of gallons of toxic water into the Animus River, which flows downstream into the San Juan River, affecting many Navajo farmers. The EPA, while admitting fault for the spill, has refused to pay any damage claims arising from the spill. A lawsuit by the Nation is still pending.

Much of the haul route used by Energy Fuels traverses the Cameron Chapter of the Nation.

“As Navajo Nation, we have dealt with uranium since the cold war and still dealing with mines left behind by irresponsible people....the last thing we need is for another mine transferring it though our communities....No Haul!” said Milton Tso, Cameron Chapter president.

Banks said the Forest Service is monitoring the situation closely, and after viewing video submitted by concerned individuals, determined that water being misted into the air was not affecting Kaibab National Forest.

“To our knowledge, the pond has not been breached, and no water from the pond is being placed or sprayed onto National Forest land outside of the mine site,” Banks said. “The Kaibab National Forest takes very seriously the concerns about appropriate disposal of mine water and will continue working closely with Energy Fuels on this issue.”

Approved by the Forest Service in 1986, Canyon Mine sunk only about 50 feet of a proposed 1,450-foot mining shaft before halting operations in 1992, when the bottom dropped out of the uranium market. In 2012, Energy Fuels resumed construction at the site after lawsuits filed by the Havasupai Tribe and several conservation groups were initially unsuccessful. An appeal of those verdicts is currently being considered by the Ninth Circuit Court of Appeals, with a ruling expected later this year.