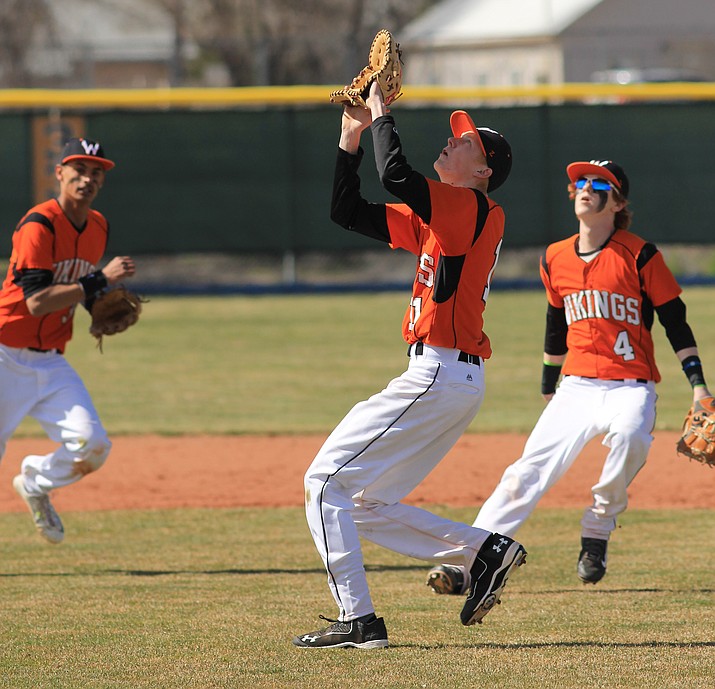 Payce Mortensen catches a ball at second base while Quinn Howell and Daniel Lopez look on.

the Williams Vikings varsity baseball took a break from the regular season and went to work over spring break at the River Valley tournament March 9-11.

The Vikings had a mixed bag of results at the tournament finishing with a 4-1 record. The Vikings started off the tourney with a dominating 23-2 win over Joshua Springs Christian. Carston Brinkworth earned the win, pitching four innings in which he gave up six hits, two earned runs and struck out three with four walks.

Daniel Lopez was a force at the plate, going 4 for 4, all singles with two RBIs. Frankie Kramer went 2 for 2 with one double. Alex Howell,

Riley Heap waits for a pitch.

On March 8, the Vikings beat the Meadows Mustangs 6-3, a school out of Las Vegas. The Vikings scored three in the second and followed with one run in each remaining inning to top the Mustangs. Lopez went 2 for 3, while Alex and Quinn Howell and Payce Mortensen went 1 for 2, and Perkins went 1 for 3. Perkins and Quinn Howell had two stolen bases a piece. Joe Zabala threw five innings, allowing five hits, two earned runs and striking out four. 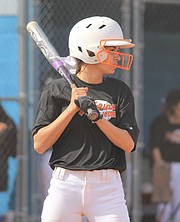 Destinee Pennington steps up to the plate.

Later that afternoon the Vikings faced the Kingman Bulldogs, who dealt the Vikings their first loss Feb. 25. The Vikings collected a 5-4 victory over the 3A school, scoring two in the first, two in the second and one in the fifth.

Perkins went 2 for 2, with one RBI and led the team with five stolen bases. Quinn Howell, Brinkworth and Grantham went 1 for 2, with 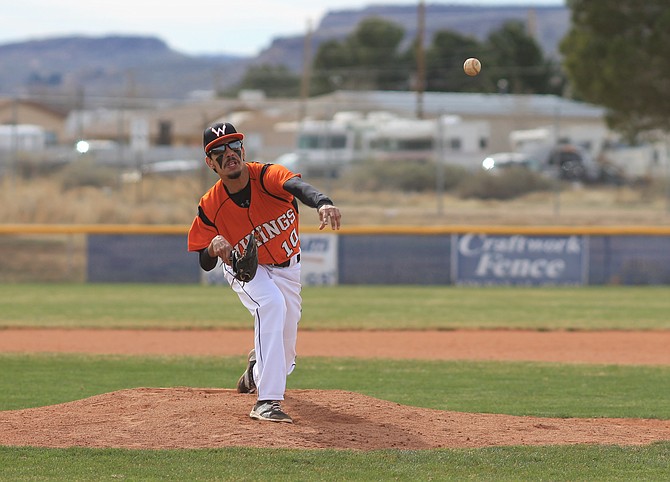 Joe Zabala pitches for the Vikings in a game with Kingman.

Grantham pulling in a double and two stolen bases. Brinkworth had two RBIs and Perkins had one.

With three wins in their pockets, the Vikings had a night’s rest before facing Many Farms March 11. The Vikings headed the Lobos a loss, 13-5. Michael McNelly and Francisco Ortiz went two for three, with Ortiz bringing in one RBI. Lopez and Ayala went 2 for 4, with Lopez bringing in three RBIs. Perkins and Mortensen had three stolen bases, and Zabala nabbed two.

The Vikings ended their run at the tournament with a 1-4 loss to Monument Valley. The Mustangs held the Vikings scoreless and until the sixth when Grantham brought in Lopez. The Mustangs only allowed five hits with Grantham going 3 for 3, Lopez and Perkins went 1 for 3, with the rest of the Viking bats held silent.

Lopez and Perkins split pitching with Lopez bringing five strikeouts, no earned runs and only one hit.

The Vikings returned to classes March 20 and face a full week of games beginning with Mayer at home March 21, travel to Sedona March 23 and travel to Mayer March 25.

The Lady Vikes travelled to Needles March 9-11 in tough tournament for the girls where they lost all four games. Pahrump Valley handed the Vikes their first loss 8-3. The Vikes then lost to Faith Lutheran, 15-1, Boulder City, 11-1 and Legacy School 3-2.

The Lady Vikes played Mayer March 21, and then travel to Phoenix for the Chandler Prep Tournament March 23-25.