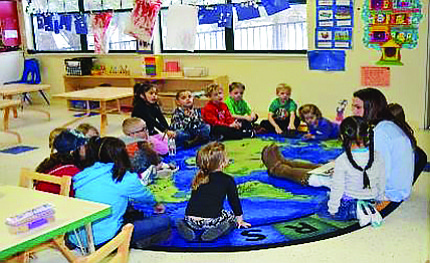 GRAND CANYON, Ariz. — At the close of nearly a year-long process, the Kaibab Learning Center has improved its standing with the evaluating organization, director Michelle Pahl said. KLC, which was previously operating under a two-star rating, received a 4.73 star rating in this year’s evaluation.

The annual evaluation by Quality First marks the first time KLC has been rated so highly, which Pahl said would not have happened without donations, most of which went into teacher salaries.

“The community has been so generous in supporting us,” Pahl said. “Because of their support, we’ve been able to hire more teachers, which helped push us toward that five-star rating.”

Pahl said contributions from the town of Tusayan, Red Feather Lodge, Xanterra, Papillon Helicopers and the National Park Service were a big factor in KLC being able to place two teachers in every classroom, which drove the teacher-to-child ratio down. The lower the ratio, the easier it is to provide a quality learning environment for the kids.

“Licensing ratios say that we can have one teacher for eight two-year-olds,” Pahl said. “But we don’t want to do that, that’s crazy. Our ratio is one-to-six.”

Pahl said the evaluation, which began last summer, has three parts: evaluators visit and observe the classroom environment, monitor teacher interactions, and then get into the point scale. A center must pass each part of the evaluation before moving on to the next. In the past, KLC was unable to get to the point scale segment, which involves more behind the scenes information like paperwork and records.

This year, KLC aced the first two parts of the evaluation, bringing them nearly to Quality First’s highest star rating of five stars. Because of their four-star status, the center will now go through the evaluation process every two years instead of annually.

The funding is used for operating expenses and day-to-day items that the children go through quickly like disposable dishes, craft supplies or paper towels.

Joking aside, Pahl credits community support for the center as the biggest reason KLC is able to thrive and provide care for Tusayan and Grand Canyon residents.

“I just want to give a big thank you to the community,” she said. “If we didn’t get that support from the local businesses, we couldn’t have afforded to have to teachers in every room, which helped us score this high.”

Along with teacher salaries, which make up the bulk of KLC’s expenses, support from the community also provides scholarships so local children from Tusayan and Valle can attend the center. A portion of the funds donated also helps offset employee housing costs.

Quality First, which is part of the First Things First program, partners with regulated childcare providers to make improvements designed to help children birth to 5-years-old thrive. The organization performs annual and bi-annual evaluations and assigns centers a star rating based on several criteria, such as teacher interaction, teacher-to-child ratios and the classroom environment.

First Things First is a voter-created, statewide organization that funds early education and health programs to help kids be successful once they enter kindergarten.