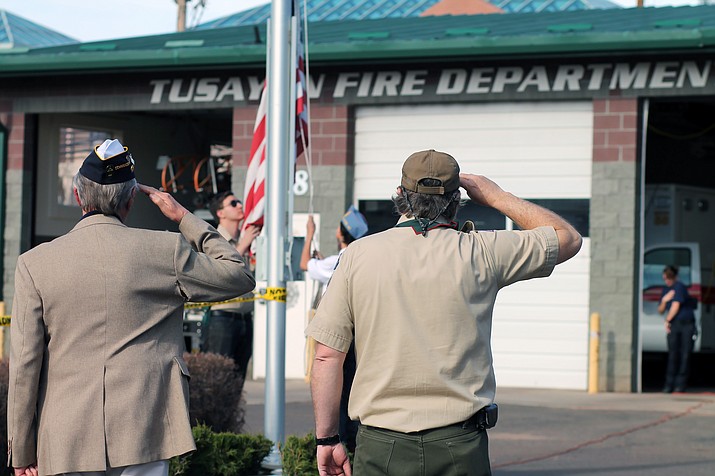 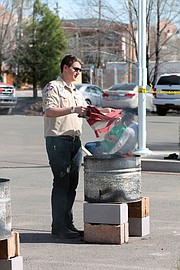 The Boy Scouts of America and the American Legion are the only two organizations officially sanctioned to retire American flags.

Bob Yarnell, a veteran and scout commissioner, said the group decided to retire 98 flags at the ceremony to recognize the 98th anniversary of both Grand Canyon National Park and the American Legion. He said the group received many more flags to retire.

“They came from all over the national park, the town of Tusayan, and the legion posts,” he said.

Bob said a formal flag retirement ceremony is important because it’s an event that not many people witness.

“I will be 70 in July, and I’ve never seen a formal flag retirement ceremony,” he said. “There’s quite a few people here who haven’t.”

The ceremony is the Eagle Scout project of his son, Noah. The rank of Eagle Scout is the last, highest rank a Boy Scout can achieve, and many requirements must be met. In order to attain the Eagle Scout rank, a Boy Scout must organize a project in which he demonstrates leadership and the ability to delegate tasks to others. After presenting the project to a committee, the Scout must carry out the project completely on his own, documenting the process.

“It’s a completely hands-off project,” Bob said. “He has to do it all and report to the committee by himself. He isn’t supposed to do much of the labor — he has to show leadership and show that he can delegate tasks to others. He’s done a pretty good job.”

The ceremony started with the raising of the flag and the Pledge of Allegiance, followed by the subsequent retiring of the flag flying over the Tusayan

Fire Department, where the event was held. American Legion John Ivens post commander Shaun Shields presided over the ceremony, in which Noah and two troop members incinerated the old flag before raising and saluting a new one. The Scouts then retired the remaining flags.

Noah said he wanted to do the flag ceremony as his project after seeing protests on TV in which protesters burned or stomped on the American flag.

“I wanted to do this because of all the government protests, in which people are burning the American flag as a sign of protest, using it as a form of disgrace,” Noah said. “That’s not what it’s meant to be — this is a sign of respect.”

Noah said most of the work involved organizing the project with the project review board in Flagstaff – writing up a summary of the project, presenting it to the committee and getting it approved. He also organized a trash clean-up along Highway 64 as part of the project. After the event is complete, Noah said he will spend a few hours writing down his documentation and gathering pictures for his presentation. He will then return to the Board of Review with his presentation, at which time the board will determine whether he met all the leadership requirements to earn his Eagle Scout rank.

Noah will also need to complete his final required merit badge before April 12, when he turns 18.

Mike Hoblin, Noah’s scout leader, said achieving the rank of Eagle Scout requires many years of hard work, with the final project a culmination of the skills the boys learned while coming up through the ranks. Hoblin said Noah showed a good work ethic in organizing the project.

“After he begins this project, all I can do is encourage him and do that tasks that he asks me to do,” Hoblin said. “It’s all up to him. He’s done a great job.”

The rank of Eagle Scout must be attained before the scout’s 18th birthday — at that time, the Scout can no longer be considered a Boy Scout. Hoblin said many Eagle Scouts go on to become involved in the organization’s adult programs, such as the Order of the Arrow, which provides continued leadership for Scouts young and old. Many of them also become Scout leaders of their own troops when their children become involved.

Noah said he plans to return to scouting as an adult, either as a leader or to assist his former troop.

In the nearer future, Noah plans to attend Embry Riddle University in the fall, where he will major in aeronautical science in order to attain his commercial transport pilot rating.