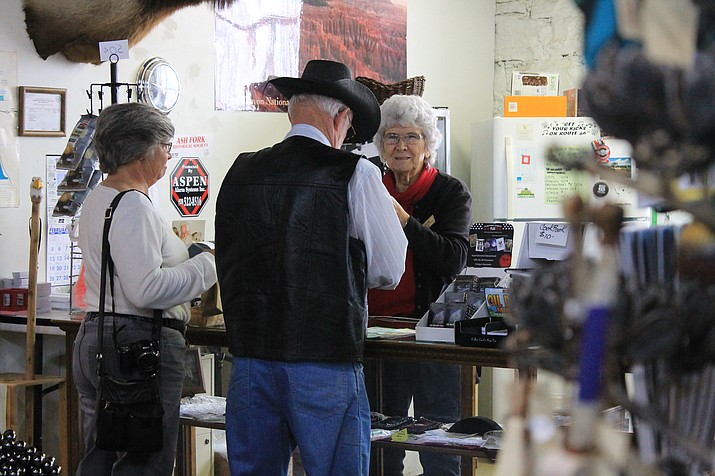 Mary Elizabeth Jane Colter going over blueprints for one of her buildings in the Grand Canyon.

Those who are interested in local history or Southwestern architecture are invited to attend two free programs at the Ash Fork museum in the next few weeks.

Local historian and archaeologist Pete Hester will be presenting a talk about the history of Ash Fork March 25 at 1 p.m., and a group will be creating a living history presentation of the life of architect Mary Colter April 1 at 1 p.m.

“Pete will be talking about archaeology from Mt. Floyd to the Peaks,” said museum curator Fayrene Hume.

The presentations are just two projects Hume has brought to her beloved town of Ash Fork. Hume has labored tirelessly for years to protect Ash Fork’s past while working to revive the struggling community.

Hume has lived in the community since 1951 and has witnessed the boom and busts that make up Ash Fork’s storied past. Her husband’s grandfather, Thomas Cooper Lewis, was the first businessman to come to Ash Fork and the town’s main street is named after him.

Desert View Watchtower at the Grand Canyon is a building Mary Colter designed.

“Our kids are fifth generation here,” she said. “And most still live here, although it hasn’t been easy for them to stay.”

Although the area was home to many Native Americans as evidenced by the rock art, pottery shards and lithic sites, Ash Fork boomed as a railroad town when the Atlantic and Pacific Railroad (the Santa Fe) came through in 1882.

Lewis arrived in Ash Fork at that time and opened the first business.

“He came up from Prescott,” Hume said. “He knew the railroad was coming up here and knew people would need a store and livery stable, so that’s what he did.”

Ash Fork grew and gained its own post office and Wells Fargo building. Cattle and sheep ranching expanded and the stone industry began. Local flagstone was unearthed and the railroad was utilized to ship stone for public buildings, homes and churches.

Railroad traffic continued to increase and Fred Harvey changed the landscape of the town when he built the grand Escalante Hotel in 1907. Its impressive Mission Style architecture drew crowds who stayed in the hotel and restaurant as they travelled on the railroad. The building also housed a curio shop, news stand, barber shop, and lunch room.

“It was so beautifully done,” Hume said. “They had furniture outside you could sit on and the floor was this beautiful terracotta tile that just glistened when you swept it. They never frowned about us kids going down there in the night time and watching the trains coming in and out.”

The hotel was also home for several Harvey Girls employed by the hotel. Harvey hired young, attractive and intelligent women between the ages of 18 and 30 to come west. Harvey paid $17 a month with free room and board.

“My godmother came here in 1925 as a Harvey Girl,” Hume said. “She signed up for six months and then signed up again. She eventually married a railroader here and stayed. She’s buried in the cemetery.”

Route 66 once again changed the dynamic in Ash Fork as travelers on the Mother Road came through town on their way across the country. The Escalante began to cater more highway travelers than railroad passengers and the increase in automobile use resulted in the town creating a divided highway.

“It was a booming time,” Hume said. “Service stations, motels and cafes popped up everywhere. We had five restaurants and three were open 24-hours. There were 15 service stations and kids could always get a job, they all needed help.”

With the advent of more motels and businesses in communities along Route 66, the beautiful Escalante Hotel closed down in 1948 and was demolished in 1969.

“I met with the governor to encourage him to stop the dismantling, but it didn’t do any good,” Hume said.

Now dependent on the flow of traffic from Route 66, Ash Fork received a huge blow when Interstate 40 was built to replace Route 66 and completely bypassed the town. The loss of traffic devastated the local businesses with most having to close their doors.

“It was just like you turned a switch and there was nothing the next day,” Hume said.

Today, the small community continues to soldier on with the help of several flagstone businesses, ranching, mining and a few travelers on Route 66.

Hume manages the Ash Fork museum and is part of the Ash Fork Development Association. The museum has many exhibits and information about the history of Ash Fork, including a large replica of the Escalante Hotel.

Hume keeps the spirit of Ash Fork alive with the museum and the annual Pioneer Days parade. She also works to bring speakers and workshops to the museum.

The Ash Fork Route 66 Museum is located in the historic Arizona Department of Transportation building on the west side of town at 901 W. Old Route 66.

Mary Colter was a pioneer in American architecture because of her understanding of archaeology and her attempts to recreate history in her buildings. Her most notable designs were at the Grand Canyon where she created a series of remarkable buildings such as the 1905 Hopi House, the 1914 Hermit’s Rest and observatory Lookout Studio, the 1932 Desert View Watchtower, the 1935 Bright Angel Lodge complex, and the 1922 Phantom Ranch buildings. Colter was also the primary designer for the park’s El Tovar Hotel.

Colter was known for her tenacity in being a woman architect in a largely male-dominated field in the early 1900s. She was born in 1869 and grew up in Texas, Colorado and Minnesota. She attended the California School of Design and through contacts joined up with the Fred Harvey Company as an interior designer. Her first work was the Indian Building at Harvey’s famous Alvarado Hotel in Albuquerque. Her reputation grew quickly as she become well-known for using natural materials to mimic nature and her ability to create rustic architecture.

She went on to become the principal designer for the Fred Harvey Company. Her work reflected the beauty she saw in the southwest and its people. She was known as a perfectionist who placed high expectations on herself and those who worked with her.

Colter’s work was not limited to the Grand Canyon. She created the 1923 El Navajo Hotel in Gallup, New Mexico, the Harvey House restaurant in Los Angeles, and she redesigned the Painted Desert Inn at Petrified Forest National Park. Despite this impressive list of works, Colter declared the 1930 La Posada Hotel in Winslow, Arizona as her masterpiece with its sprawling, hacienda, Spanish Colonial Revival style.