Squirrel takes out power from Williams to the Grand Canyon 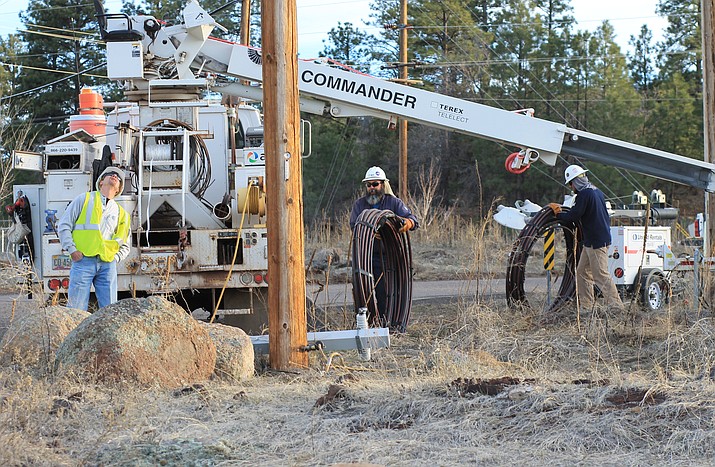 APS employees work to fix a damaged transformer in Williams.

WILLIAMS, Ariz. — A gray squirrel is being held responsible for cutting power to over 5,000 Williams, Grand Canyon and Tusayan residents March 9.

According to APS Division Manager John Haro, the squirrel climbed on to a transformer at the Williams substation and gnawed through the insulation on the transformer bushings before being electrocuted and shorting out the transformer around 11:20 a.m.

Power to the entire city of Williams, Red Lake, Tusayan and the Grand Canyon went out. Grand Canyon schools were released early because of the outage.

APS employees responded to the incident and restored power to Grand Canyon, Tusayan, Red Lake and part of Williams by 12:40 p.m.

The southwestern side of Williams, including the high school and Safeway, remained without power for several more hours.

“We want to get power back as quickly as we can,” Haro said while the crew was working on the bypass.

Haro said APS employees were hoping to have the bypass complete by 11 p.m. so they could work on the damaged transformer, but repairs went faster than expected and power was restored by 9 p.m.

“We have issues with packrats, prairie dogs, birds and squirrels,” Haro said. “We get all kinds, even ring-tailed cats and mountain lions.”

According to the American Public Power Association, an organization representing municipal electric utilities, wildlife near power equipment is the most common cause of outages at public power utilities. Failure of overhead equipment was second, weather was third and vegetation was fourth on their most recent survey on distribution system reliability.

“The heat emitted by electric lines can attract a squirrel, particularly during cold weather,” the report said.

Cyber Squirrel 1, a website that tracks power outages attributed to squirrels, has determined that 932 power outages have been caused globally by squirrels since 2013. This was followed by 452 outages triggered by birds, 83 by snakes and 72 by raccoons.

In June 2016, a velvet monkey triggered a blackout across the entire country of Kenya after the monkey fell on a transformer at the Gitaru hydroelectric power station.

According to the APS website, no specific methods detail prevention of squirrel problems with electrical systems, however, the organization implements avian-safe construction in all new construction, which includes developing nest platforms to limit hazards for birds and electrical equipment.