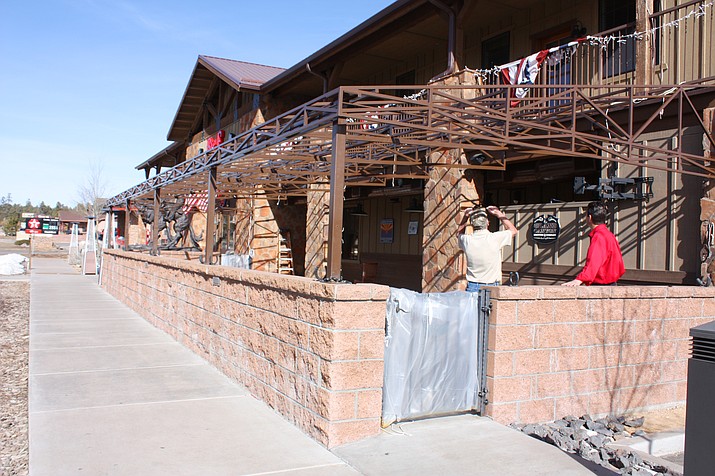 Big E Steakhouse is undergoing a series of renovations before the busier spring and summer season starts at the Grand Canyon. Some improvements include enlarging their outdoor space, making it accessible year-round by enclosing the existing patio.

TUSAYAN, Ariz. — As the South Rim prepares for its annual influx of visitors, business owners in the town of Tusayan are taking the opportunity to spruce up restaurants, hotels and the General Store ahead of the crowds.

The Tusayan General Store, operated by park concessionaire Delaware North, has been closed since January for full renovations.

Canyon Plaza Resort began their renovations at the end of 2016 and is continuing with significant upgrades. Owner Louie Serna said the entire atrium is being remodeled, including new carpet, paint and furniture. The walls have been repainted and stained to match the colors of the Grand Canyon and stonework was added to tie in the space with other parts of the property and the stonework installments found elsewhere in Tusayan.

A new trellis bar was also installed. Serna said the hotel’s guest suites have also been remodeled, and there will soon be a complete renovation of the in-house restaurant. The property has remained open during the renovations.

The local Wendy’s, which is revamping the building’s interior, closed the inside of its restaurant for a few weeks, although the drive-thru remained in service.

Wendy’s recently completed an interior renovation, closing the dining room while continuing to operate the drive-thru.

Big E’s Steakhouse and Saloon is also working on improving their outdoor space, making it accessible to guests year-round by enclosing the existing patio.

Red Feather Lodge installs new external stairways on each of its buildings.

“We’re installing glass garage doors around the patio,” said Manager ClayAnn Cook. “It will be airtight and watertight so we can use it 12 months a year.”

Cook said the glass doors will be completely open when the weather is nice, but can also be closed when the winds pick up or the monsoon storms move in.

“The garage doors are glass, so guests can still sit outside and see what’s going on,” Cook said.

Cook said she also hopes to build an addition of the same size on the north end of the building to be used for office space and storage. She will present the project at the next planning and zoning committee meeting and hopes to begin building later this year.

Closed since January, Delaware North has been renovating the General Store and post office to better accommodate visitors.

Along with the local business, the town of Tusayan itself is working on a number of construction projects in the coming months, including a joint effort with Grand Canyon School to building a regulation sports complex with soccer fields, baseball and softball diamonds and a track. The complex will be lighted, allowing for nighttime games, and will have permanent restrooms and a concession stand.

Town Manager Eric Duthie said construction on the project has been fast-tracked and the town hopes it will be completed by the time school resumes in August. Duthie said the project will provide recreational opportunities for Tusayan residents and will allow the school to host tournaments, games and track meets – something it can’t do at the moment because its facilities are not quite up to AIA regulations.

The town has also begun preparation for the construction of a housing division at Ten X, which will have around 20 homes and provide affordable housing for town residents.

Accommodations in Grand Canyon National Park are in the works as well. According to Bruce Brossman, the El Tovar Hotel is planning a major renovation project in 2018, with Bright Angel Lodge undertaking the process after the El Tovar is completed.