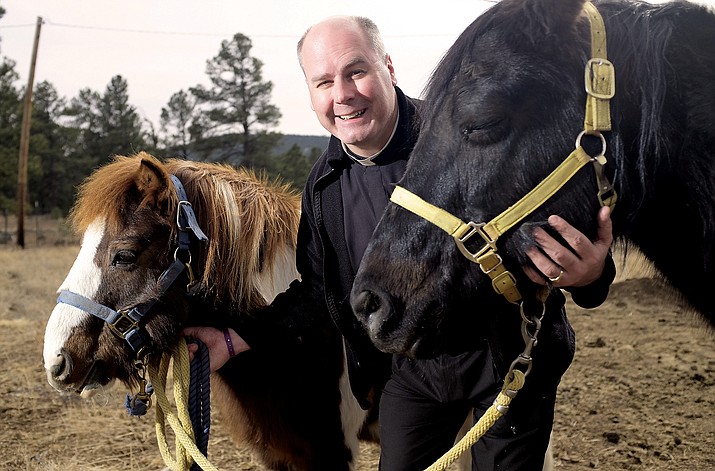 St. Joseph Parish in Williams is getting ready to say goodbye to its pastor, Father Kilian McCaffrey with a sendoff at Wild West Junction June 30 at 6:30 p.m.

“I would like everyone to come down and have something to eat and we’ll have a little celebration,” McCaffrey said.

McCaffrey has accepted a calling at St. Elizabeth Seton Catholic Church in Sun City, Arizona. The church’s pastor recently passed away and McCaffrey was asked to fill the position.

“I thought about it and prayed about it,” McCaffrey said. “I’ll miss Williams, but when God calls it’s very hard to say no.”

McCaffrey will begin at the Sun City church the first week of July.

McCaffrey has been with the Williams congregation since July 2013. He was very active and well-known in the church and Williams community where he was often seen hosting karaoke competitions, chili cook-offs, pet blessings, New Year’s Eve celebrations and other social events.

McCaffrey was born in Dublin City, Ireland and is the third of six children. He was baptized in the Church of St. Andrew, Westland Row in Dublin.

“I am blessed to be from an amazing family,” McCaffrey said. “Faith and church were the foundation of our life.”

An electronics engineer originally, McCaffrey graduated from Dublin City University before coming to the United States in 1994. He worked in Dublin, London, Detroit and Phoenix as an engineer prior to entering the ministry.

After moving to the Phoenix area, he began attending Blessed Sacrament Parish in north Scottsdale. The seeds of God’s vocation for the priesthood were nurtured at the parish and McCaffrey realized the priesthood was God’s special calling for him.

McCaffrey attended Mount Angel Seminary in Oregon and was ordained to the priesthood in 2007.

McCaffrey went on to serve as a priest at Queen of Peace Parish in Mesa; St. Vincent de Paul Parish in Phoenix; Our Lady of Perpetual help Parish in Scottsdale; and St. Joseph the Worker Parish in Williams along with St. Anne Mission in Ash Fork and St. Francis Parish in Seligman.

“People are very concerned about the future, but we always have to remember that God is with us every moment of our lives, every breath we take, every heart beat in our bodies, God is with us,” he said when he first came to Williams. “And we can never forget that.”

Father John Ehrich will take over the Williams parish upon McCaffrey’s departure July 1.