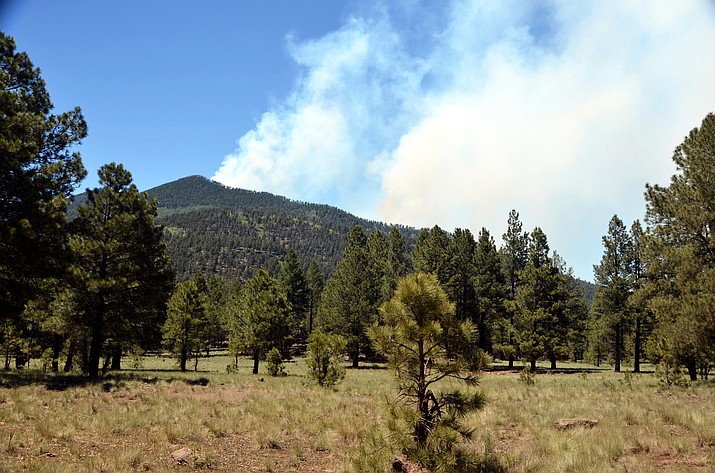 • Fires, campfires, charcoal, coal, and wood stoves – except using a device that is solely fueled by liquid petroleum or LPG fuels that can be turned on and off in areas that are barren or cleared of all overhead and surrounding flammable materials within three feet of the device;

• Smoking – except within an enclosed vehicle or building;

• Possessing, discharging, or using any type of firework by pyrotechnic device;

• Operating a chainsaw or any other equipment powered by an internal combustion engine from the hours of 9 a.m. to 8 p.m. except generators with an approved spark arresting device within an enclosed vehicle or building or in an area that is barren or cleared of all overhead and surrounding flammable materials within three feet of the generator;

• Welding or operating an acetylene or other torch with open flame;

• Operating or using any internal or external combustion engine without a spark arresting device properly installed, maintained and in effective working order this does not include motor vehicles. This is aimed at things such as landscaping tools;

• Discharging firearms, air rifles or gas guns except while engaged in a lawful hunt pursuant to state, federal or tribal laws and regulations and

• Possessing or using a motor vehicle off National Forest System roads except when parking in an area devoid of vegetation within 10 feet of the roadway or when parking overnight in Forest Service developed campgrounds and trailheads.

The county, along with Coconino and Kaibab National Forests, had been in Stage 1 fire restrictions since June 15. The Kaibab remains in Stage 1.

“That means you can still have campfires in a developed campground on the Kaibab, but not Coconino,” said Coconino County Sheriff’s Office Lieutenant Brian Tozer.

Unincorporated lands include areas such as Red Lake, Junipine and Howard Mesa, and are included in the county restrictions.

“The city of Williams and Tusayan all have their own fire ban ordinances,” Tozer said.

Coconino and Kaibab National Forests, and unincorporated areas of Coconino County have been in Stage 1 fire restrictions since June 15, which limited campfires limited them to hosted developed campsites only. However, 34 abandoned campfires were located on the forest over the June 17-18 weekend, and with the number of abandoned campfires found each day, coupled with dry lightning and warm weather, officials found it necessary to implement additional fire restrictions.

Fire restrictions will remain in place until the forest receives significant precipitation. Violation of the restrictions on national forests is punishable by a fine of up to $5,000, imprisonment up to six months, or both.

An explanation of the different stages of fire restrictions and what is typically prohibited during those stages can be found online at www.tinyurl.com/firestagesexplained.

Fire restrictions will remain in place until the forest receives significant precipitation. Violation of the restrictions on national forests is punishable by a fine of up to $5,000, imprisonment up to six months or both.