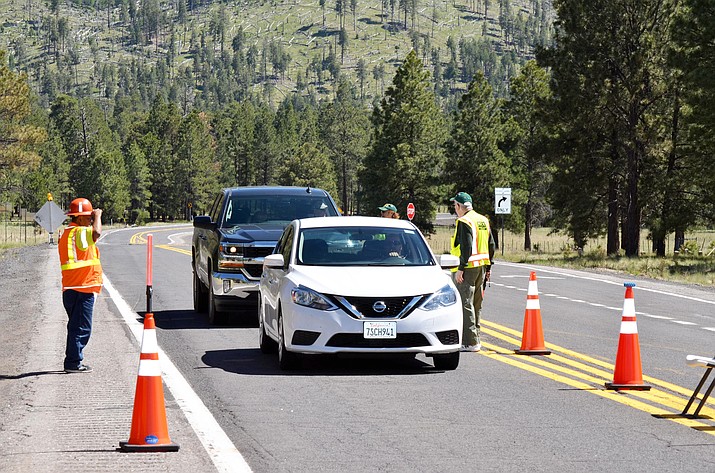 Highway 180, north of Flagstaff, reopened June 20. The road was closed because of smoke impacts from the Boundary Fire.

FLAGSTAFF, Ariz. – U.S. Highway 180 has reopened north of Flagstaff between mileposts 236 and 248 after visibility along the highway has increased due to reduced smoke impact from the Boundary Fire, according to the Arizona Department of Transportation.

Though the road is open for travel, there will be lower speed limits through the affected area as firefighting operations continue and personnel and equipment enter and exit the highway.

While the smoke impact has lessened enough to safely reopen US 180, ADOT personnel will continue to monitor visibility conditions along the highway.

Firefighters made big strides forward yesterday in containing the Boundary Fire securing private property parcels and fire lines which increased containment from 18 to 30 percent. Cloud cover and increased relative humidity allowed fire to move along the ground, promoting healthy consumption of dead and down fuel returning nutrients to the soil.

Yesterday morning, minimal but noticeable smoke may impact the following communities of Flagstaff, Baderville, Tuba City, Cameron, Timberline/Doney Park and Bellemont. Smoke will disperse east of Flagstaff towards Leupp and hazy smoke will be drifting near Doney Park and Timberline as temperatures increase throughout the day. More information on smoke and air quality is available at www.azdeq.gov

For the most current information about highway closures and restrictions statewide, visit ADOT’s Travel Information Site at www.az511.gov, follow us on Twitter (@ArizonaDOT) or call 511.