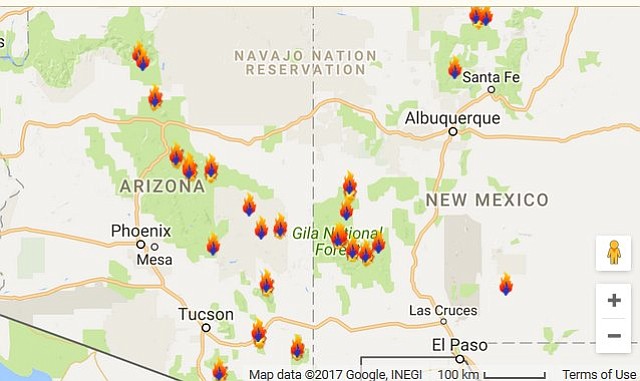 According to the National Interagency Fire Center, Arizona leads the country with nine large wildfires currently burning. Excessive heat and dry conditions have put most of the state under fire restrictions.

WILLIAMS, Ariz. — According to the National Interagency Fire Center, Arizona firefighters are currently battling nine large wildfire across the state, with 45,000 acres burned. Numerous smaller wildfires are being reported daily, which leaves Arizona with more wildfires than another any other state.

More than 1,000 firefighters have battled the Highline Fire just north of Payson since its discovery June 10. As of June 18, the fire was considered 76 percent contained. After threatening homes, which led to evacuations, firefighters were able to stop the fire’s movement to the south, east and west sides June 19, according to reports. The cause of the fire is unknown at this time.

A wildfire north of Phoenix near the Sunset Point rest area closed the southbound lanes of I-17 for several hours June 18. The blaze, called the Maggie Mine Fire began burning around 3 p.m. in the remote, mountainous area. Air tankers, helicopters and firefighters battled the wildfire which has grown to 1,400 acres according to Inciweb.com.

Almost two dozen wildfires have scorched the landscape between north Phoenix and the Sunset Point area this spring. Fire officials say most are believed to be human caused.

In the early morning hours of June 19, smoke was seen coming from the Freidlein Prairie Road (Forest Road 522), about two miles east of Snowbowl Road, according to Coconino National Forest spokesman Brady Smith. Smith said the fire was under an acre and determined it was human caused.

Started by lightning, the Boundary Fire on Kendrick Mountain is being managed and allowed to burn by Kaibab National Forest managers. Smoke from the fire continues to impact Flagstaff, Williams, Timberline, Bellemont, and Baderville as wind direction changes and temperatures rise. U.S. Highway 180 remains closed due to heavy smoke from the fire, which has grown to 8,067 acres.