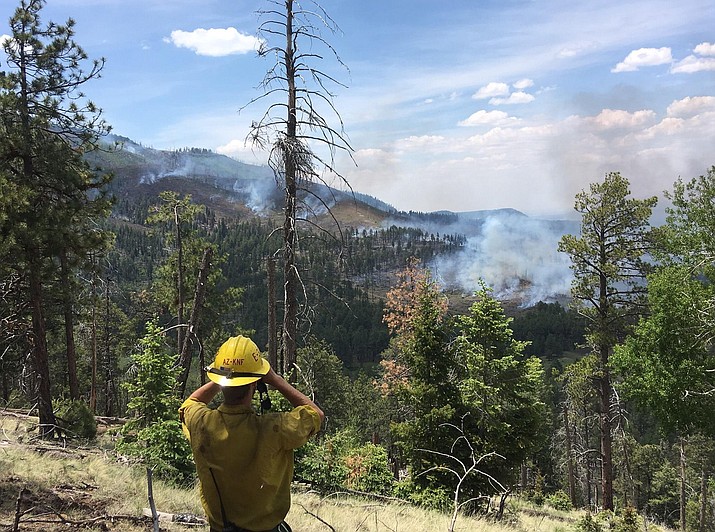 TUSAYAN, Ariz. — Campfire and smoking restrictions, also known as Stage I fire restrictions, began at 8 a.m. June 15 across the entire Kaibab and Coconino national forests. The goal of the fire restrictions is to protect public health by reducing the number of preventable human-caused wildfires.

Under the restrictions, fires, campfires, charcoal, coal and wood stoves are prohibited, except within a developed recreation site. Smoking is also prohibited, except within an enclosed vehicle, building or a developed recreation site. Using a device that is solely fueled by liquid petroleum or LPG fuels that can be turned on and off is allowed in areas that are barren or cleared of all overhead and surrounding flammable materials within three feet of the device. Fireworks are always prohibited on all national forest lands.

The national forests use fire restrictions to help prevent unwanted, human-caused fires and to limit the exposure of visitors during periods of potentially dangerous fire conditions. Implementation of fire restrictions normally occurs based on a combination of factors that are carefully measured. Criteria used to determine when to implement restrictions include things such as current and predicted weather, fuel moisture, fire activity levels and available firefighting resources.

Additional restrictions may be applied as conditions warrant. An explanation of the different stages of fire restrictions and what is typically prohibited during those stages can be found online at tinyurl.com/firestagesexplained. Fire restrictions typically remain in effect until the forests receive significant precipitation, at which time they will be rescinded.

A small wildland fire that broke out on the west side of Williams that same day is an example of how human-caused fires can quickly burn out of control. Williams Police Chief Herman Nixon said officers who found the small blaze in the forest were unable to put the fire out and observed it spreading quickly. Williams Fire Department and Kaibab National Forest were dispatched.

According to Kaibab National Forest Public Information Officer Jackie Banks, the fire was burning grass and shrubs, and had not ignited any trees. Firefighters were able to contain the fire to less than one acre.

Forest officials would also like to remind visitors that having a campfire on the national forest while under fire restrictions is a violation that carries a mandatory appearance in federal court. Visitors should use extra caution when recreating on all public lands during fire season.