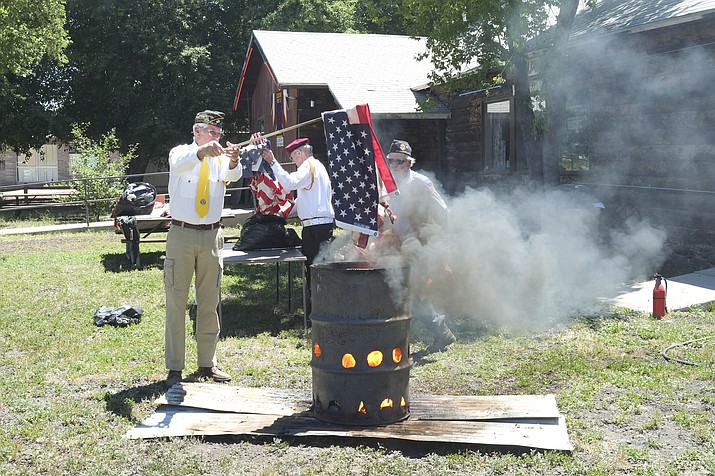 “I am what you make me; nothing more. I swing before your eyes as a bright gleam of color, a symbol of yourself” ~ Franklin K. Lane, Secretary of the Interior at a 1914 Flag Day ceremony.

To show patriotism and honor the American flag, a Flag Day ceremony was held at American Legion Cordova Post 13 June 14.

The ‘Dignified Disposal of Unserviceable Flags’ ceremony was put on by the American Legion with members of the VFW also participating. More than 100 unserviceable flags were disposed.

Roger Ely, a member of American Legion Cordova Post 13 said Flag Day is a lesser known holiday but is just as important. He said Flag Day is an opportunity for the public to show its patriotism and honor ‘Old Glory.’

While the Fourth of July is traditionally celebrated as America’s birthday, the idea for an annual celebration of the flag originated in 1885 by a schoolteacher in Wisconsin. June 14 was the anniversary of the official adoption of the Stars and Stripes as the United States Flag. Over the years communities continued to celebrate the flag’s birthday. Flag Day was officially established by President Woodrow Wilson in 1916 and on August 3, 1949 President Harry S. Truman signed an Act of Congress designating June 14 of each year as Flag Day.

“We accept flags for disposal when anyone feels that they’re unserviceable,” Ely said.