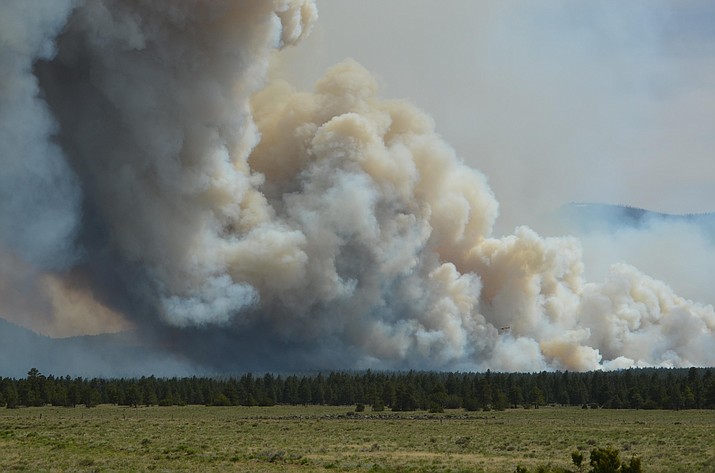 The Kendrick fire jumped the northern containment line near Highway 180, but still remains within the USFS planning area.

WILLIAMS, Ariz. – Helicopter aerial ignition operations continue today near the Kendrick Mountain peak. The operations, in which incendiary devices are dropped from a helicopter to reduce dead and down fuels, began near the peak June 13.

According to Kaibab National Forest, aerial ignition will be used to bring fire slowly down the mountain. These ignition tactics benefit the ecological conditions in the Kendrick Mountain Wilderness while minimizing impacts.

A community meeting will be held at 6 p.m. Thursday, at the Summit Fire District, 6050 E. Firehouse Lane, Flagstaff. The meeting will focus on smoke from the fire and ignitions and will provide information on the Boundary Fire and on potential impacts from smoke that may affect the eastern side of Flagstaff over the next several days.

Health and emergency management personnel will also be on hand. Representatives of the Coconino and Kaibab national forests will discuss fire restrictions that go into effect Thursday, June 15.

Boundary Fire is located about 17 miles northwest of Flagstaff burning in the Kendrick Mountain Wilderness and north and east of the Wilderness on the Coconino and Kaibab national forests.

The wildfire is burning in heavy dead and down trees and forest debris left from the Pumpkin Fire of 2000 and ponderosa pine outside of the Pumpkin Fire scar. There are 495 personnel working on the fire which is 5,782 acres in size. The fire was caused by lightning June 1 and is 13 percent contained.

U.S. Highway 180 will remain closed because of smoky conditions until further notice. More information is available from ADOT at azdot.gov or at ADOT’s Travel Information Site at www.az511.gov.

Communities to the south and east of the fire may be affected. Smoke could settle in Fort Valley, Baderville and east Flagstaff. Low winds will keep smoke from moving out of the area and it may drift further south.