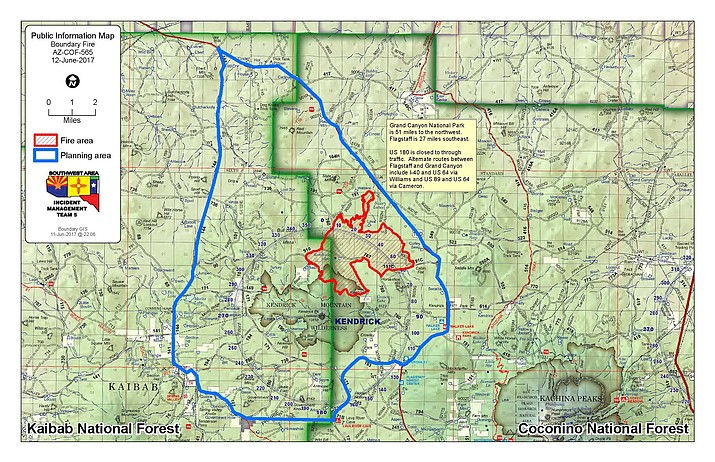 Highway 180 will remain closed because of smoke and fire activity approaching from the east.

WILLIAMS, Ariz. — Highway 180 between Flagstaff and Valle will remain closed until further notice because of smoke and fire hazards created by the Boundary Fire. Officials plan to re-evaluate the closure June 18.

The fire, which began June 1 after a lighting strike on Kendrick Mountain about 17 miles northwest of Flagstaff, has burned about 5,390 acres so far. It is currently about 5 percent contained, with around 400 personnel working the fire.

Fire managers completed a Wildfire Decision Support System (WFDSS) analysis of the fire area to determine the course of action to suppress the Boundary Fire. This analysis identifies the planning area, values at risk, the incident objectives, and the courses of action, including the suppression strategy (or strategies) to be employed to safely and successfully manage a wildfire.

The WFDSS analysis initially called for the use of indirect suppression tactics. Indirect suppression tactics are firefighting actions that are not directly adjacent to the flaming front of a fire. Fire managers chose this suppression tactic because the wildfire is burning on steep slopes with heavy dead and down trees, snags (standing dead trees) and forest debris left from the Pumpkin Fire of 2000. These conditions are not safe for firefighters because of poor footing, falling snags and rocks, and the hampered ability to move quickly if a fire blowup occurs.

High winds and dry conditions caused the fire to jump its initial northern containment line June 9, prompting officials to close Highway 180 because of potential smoke impact on visibility. According to a media release, the fire’s northward progress was significantly slowed after reaching the Horseshoe prescribed burn area, treated last October.

It is anticipated that the Boundary Fire will help clean up much of the dead and down material left by the Pumpkin Fire, thereby reducing the future probability of high-intensity wildfire and its potentially severe and negative fire effects.

In order to mitigate negative impacts on resources in the Kendrick Mountain Wilderness, fire managers plan to use aerial ignitions to introduce fire on the peaks. Flames burning uphill preheat fuels, creating a hotter burn which can harm the natural ecosystem. In contrast, flames backing down a slope burn at a much lower severity. Firefighters will introduce a lower-intensity backing fire. As the fire slowly backs down the mountain, smoke production can be minimized, nutrients in the soil will be replenished, and the hazardous dead and down fuel load on the forest floor will be consumed.

Smoke will be visible from Flagstaff, Baderville, Parks, Williams, Interstate 40, and the Grand Canyon. Smoke is predicted to impact the communities of Cameron and Tuba City during the day, and Spring Valley, Pumpkin Center, Parks and Baderville during the evening hours.

More information, details, and specific objectives for the Boundary Fire can be found at inciweb.nwcg.gov/incident/5209/. Quick updates will also be provided via Twitter at @KaibabNF and @CoconinoNF.