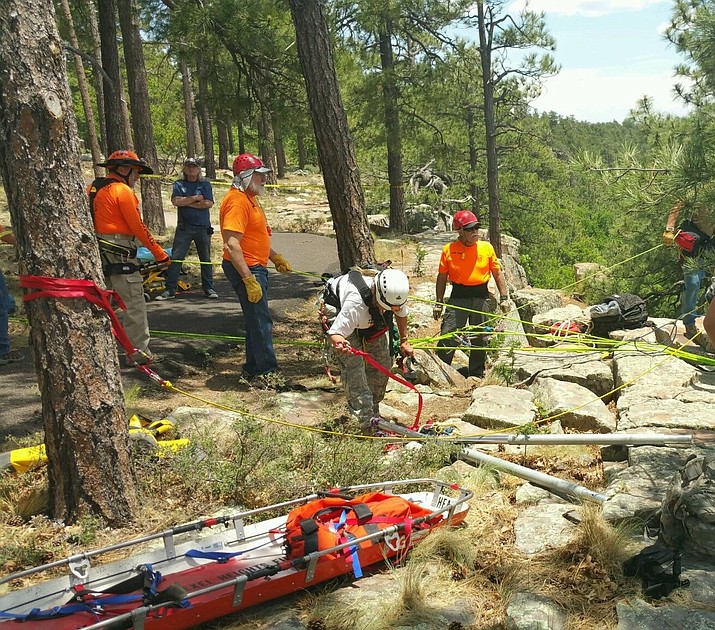 COCONINO COUNTY, Ariz. — The Coconino County Sheriff’s Office (CCSO) responded to four search and rescue (SAR) missions though the county June 6-7, reaching from Sedona to the Grand Canyon and involving the response of numerous resources.

Around 8 a.m. June 6, the department received a report of a fall victim located in the area of Twentynine Mile Canyon, which is west of Cedar Ridge, Arizona. The initial report stated the victim had fallen about 200 feet and had sustained severe injuries. CCSO coordinated the rescue effort and deputies from CCSO’s Page district responded to the scene. Deputies determined that the fall location was likely within the boundaries of Grand Canyon National Park, with the CCSO coordinating the rescue effort.

A helicopter from the Arizona Department of Public Safety (DPS) and CCSO’s Technical Rescue Team carried out the operation. The victim was identified as a 33-year-old man from Flagstaff, Arizona. The man was short-hauled from inside the canyon back to the rim, where he was transported by Classic Air Ambulance to Flagstaff Medical Center for treatment of fall-related injuries. An investigation by responding officers determined the man, who was alone at the time of the fall, had been in the area attempting to locate routes to towers and other geological formations for future climbing expeditions. He fell sometime between 2 and 3 p.m. the previous day. The man was found by his wife, who had remained with their vehicle but went in search of him when he did not return.  Once she located him, she rappelled down to him and was able to provide information on his medical condition and location to rescuers.

At around 8 a.m. the following morning (June 7), CCSO received a distress call from a lost hiker in the Brins Mesa area near Sedona.  A 70-year-old woman from New York hiked up the Brins Trail on June 6. She became disoriented by nightfall and lost the trail, and did not have cell phone service to call for help at the time. The hiker said she became tired and rested under a tree, where she fell asleep. She woke up around dawn and walked around the area until she found a cell phone signal. She called 911 to report she was lost and becoming dehydrated. The CCSO search and rescue unit responded to the Jordan Trailhead and climbed to the top of Brins Mesa, where they located the lost hiker. She was rehydrated and escorted back down the trail. She had no medical conditions and did not require further medical treatment.

While responding to the Brins Mesa report of a lost hiker, the department received a call reporting that a person had fallen off the Mogollon Rim in the Woods Canyon area. The Forest Lakes resident Deputy responded along with Heber Overgaard Fire Department and Forest Lakes Fire Department and the Gila County Sheriff’s Office search and rescue team.  The victim, a 15-year-old girl from Gilbert, Arizona, was visiting the area with a Scout group.  She was riding her bicycle along the Mogollon Rim when she crashed over the edge, falling about 25-30 feet off a rock cliff, landing on a ledge below. Forest Lakes Fire Department, Tonto Rim search and rescue and Gila County search and rescue personnel were able to climb down to the victim, render medical aid, and lift her back to the rim. The girl was treated at the scene and transported to the Payson Hospital for a laceration to her head and other injuries.

CCSO received a third rescue request June 7 at around 12:30 p.m. A 74-year-old man and his 76-year-old wife, both from Tucson, Arizona, were hiking at Veit Springs when the man collapsed several times. Neither he or his wife had a cell phone to call for help, so the woman took the trail back toward their vehicle, where she came across another couple hiking the area who were able to call 911. CCSO deputies, search and rescue unit and Guardian Ambulance responded to the nearby trailhead. Deputies and medics were able to drive a vehicle part of the way into the Veit Springs area and located the man on foot. Medics were able to assist the man to a sheriff’s vehicle, which transported him to a waiting ambulance at the trailhead. The man was transported to Flagstaff Medical Center for treatment.

Sheriff’s deputies remind visitors that it is important for all outdoor recreationists to tell someone where they are going, carry the ten essentials and use the appropriate personal protective equipment for the activities they are engaged in.