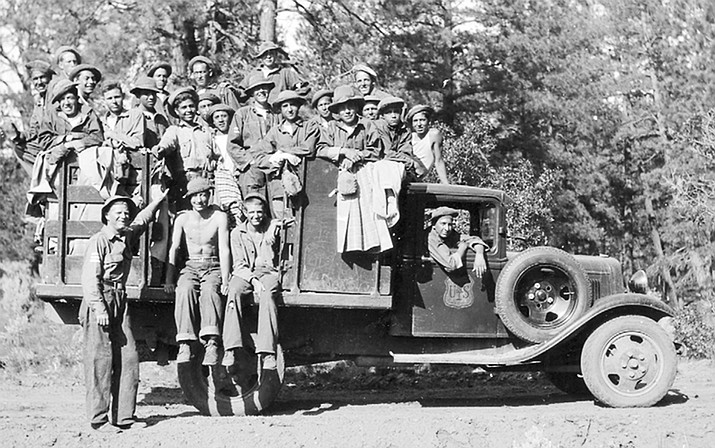 Civilian Conservation Corp workers pile onto a truck for a job on the Kaibab National Forest in the 1930s.

WILLIAMS, Ariz. — It was 1929. The first car radio had just been created, the first public phone booths began appearing and Charles Lindbergh had just flown from Detroit to Cape Horn. It was also the year of Black Tuesday, the stock market crash that led the nation into a downward spiral toward the Great Depression.

During this time, a young dairy farmer from Cumberland, Maryland, got the notion to head west. Andrew Wolf was in his early twenties when he joined the mass of migrants headed west in search of a new life. However, instead of heading to California as most did, Wolf landed in Flagstaff, Arizona.

“There was the stock market crash in 1929 and people were jumping out of buildings, committing suicide, businesses were going broke and so forth,” Wolf said in an recorded library interview in 1976 in Flagstaff.

Wolf heard that the AL&T Lumber Company was hiring and hoped to secure a job. 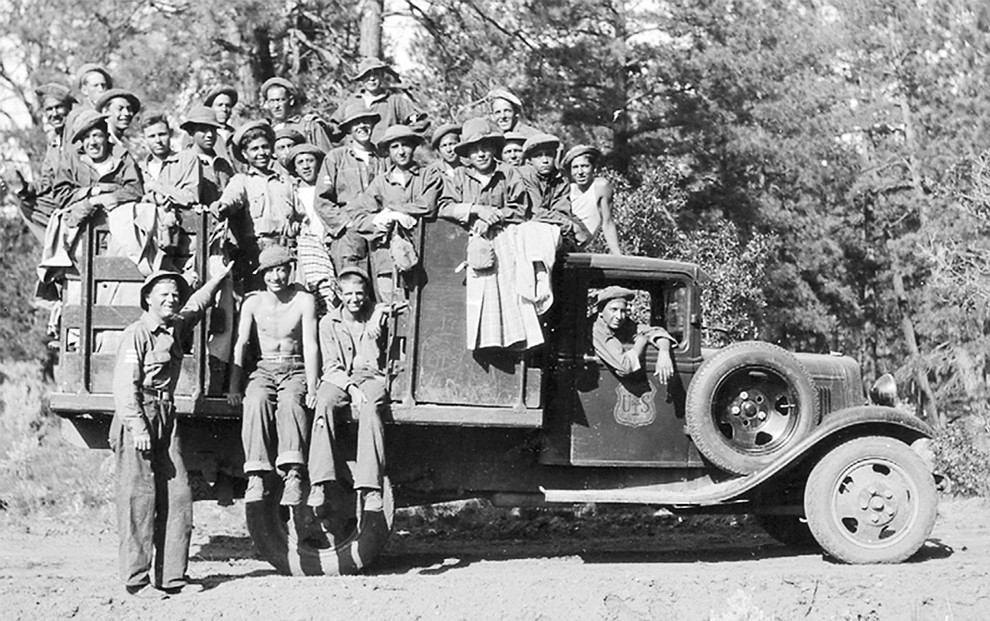 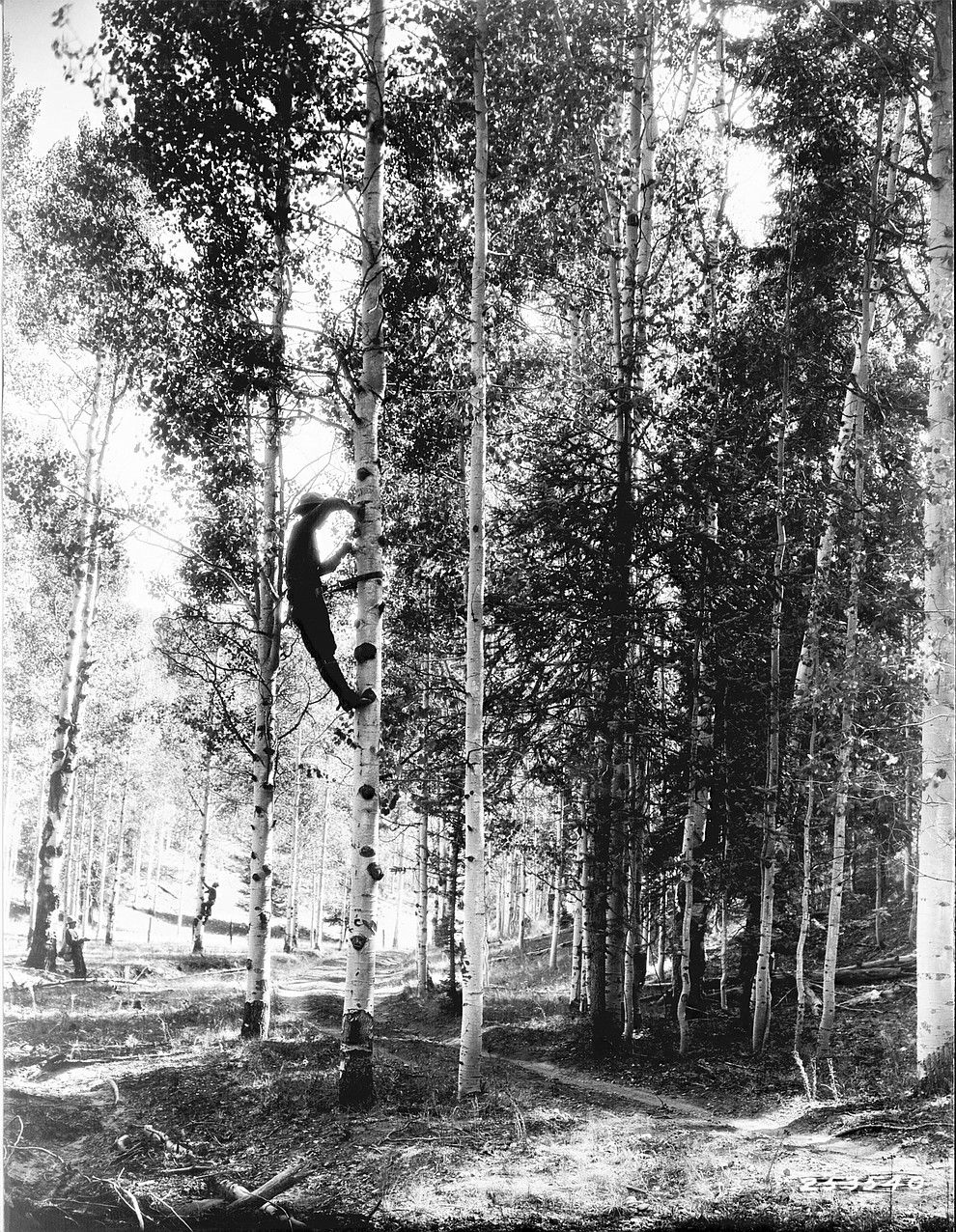 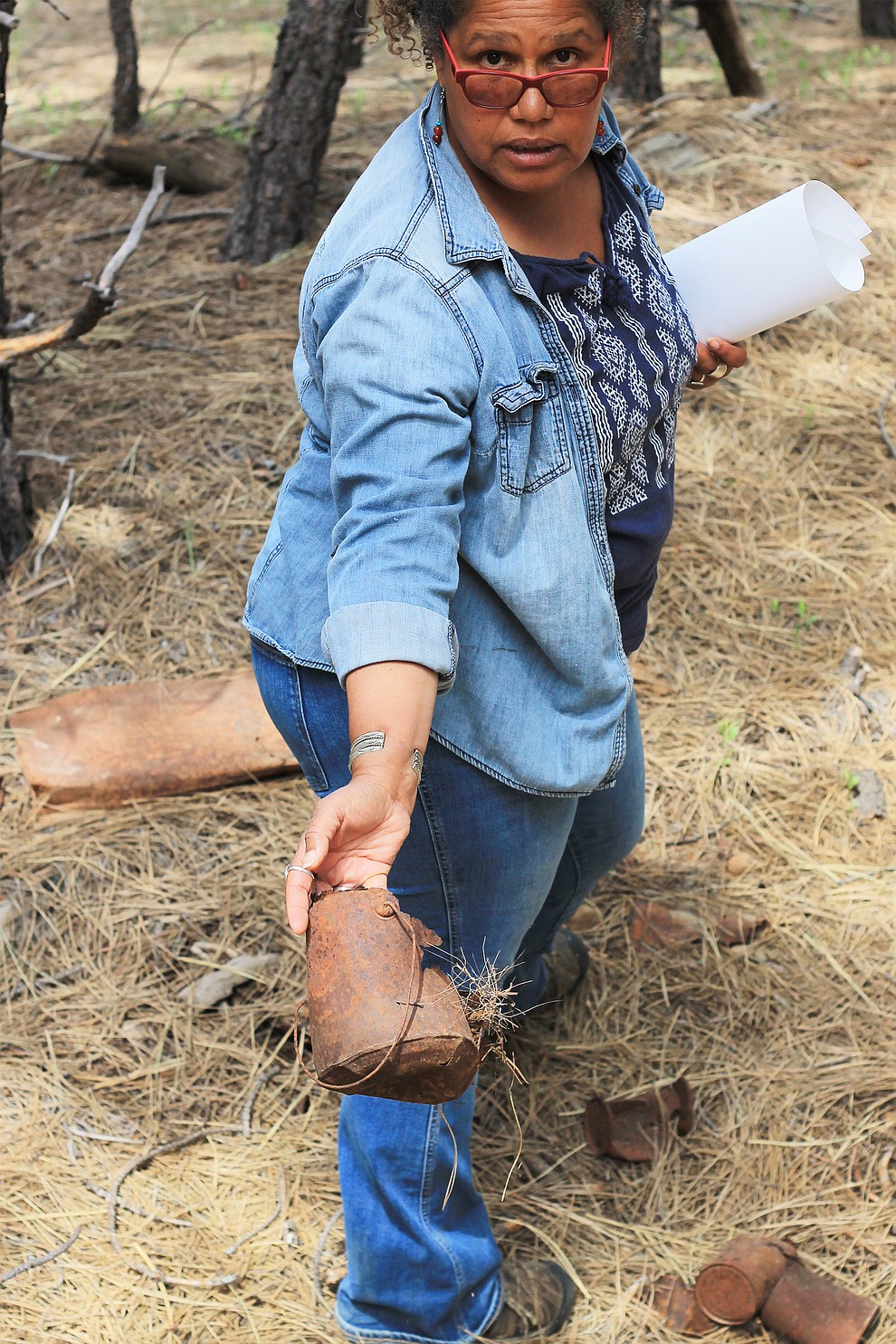 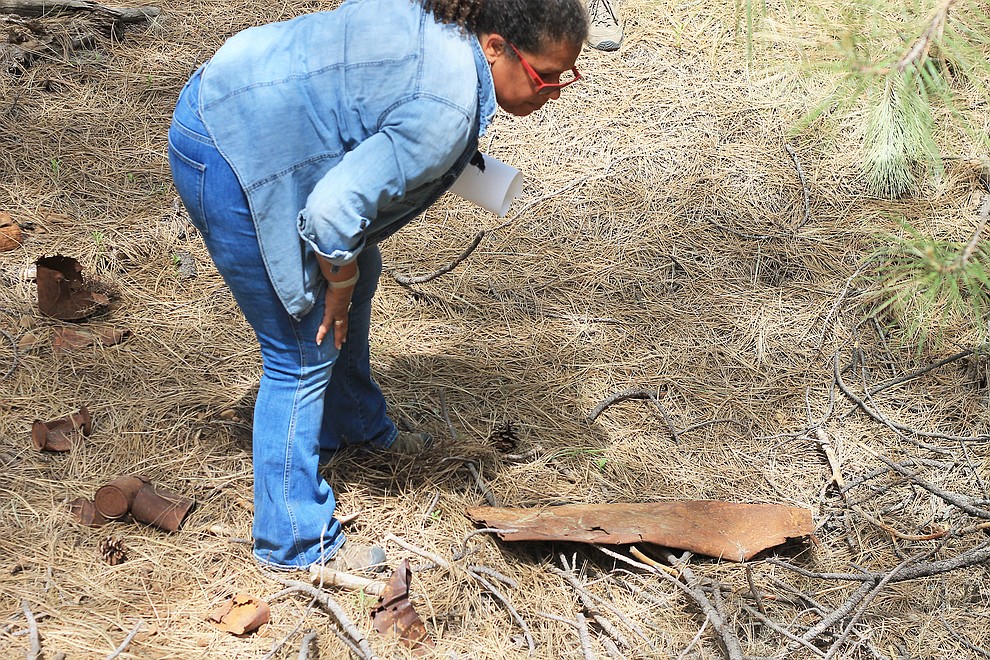 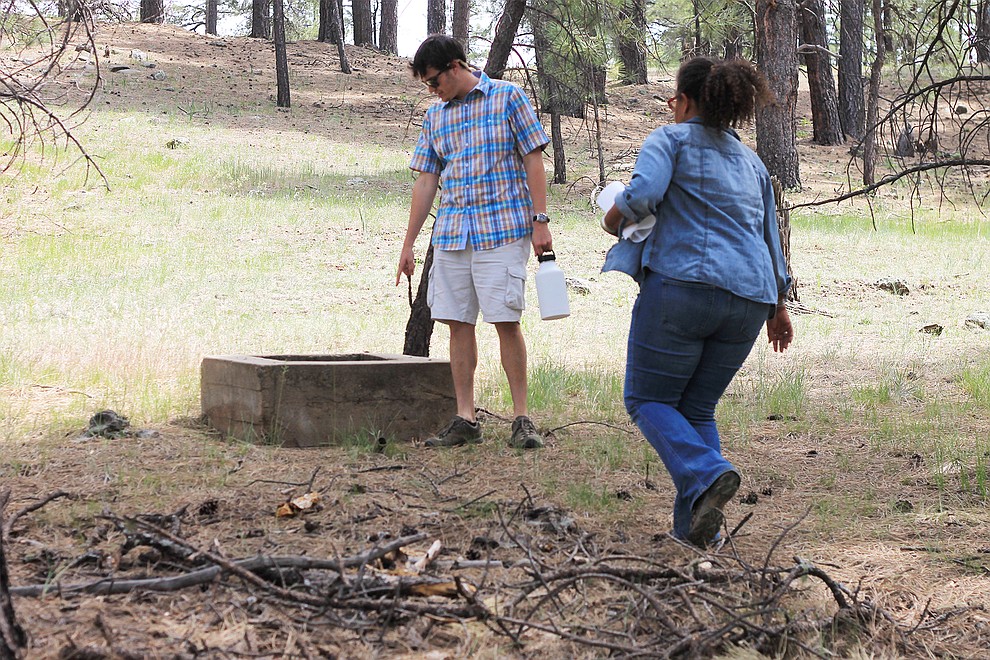 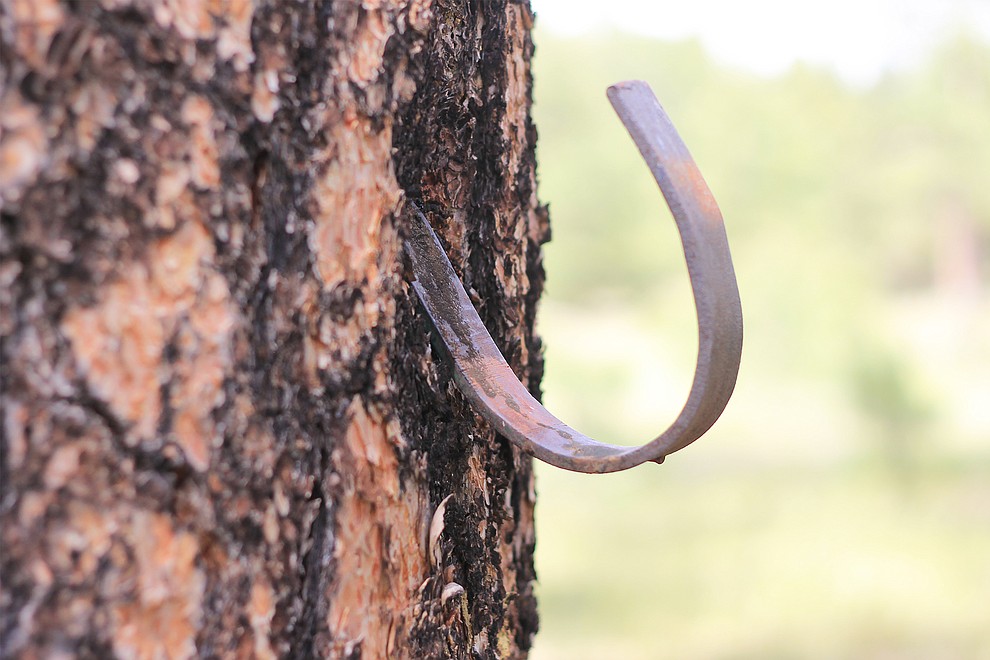 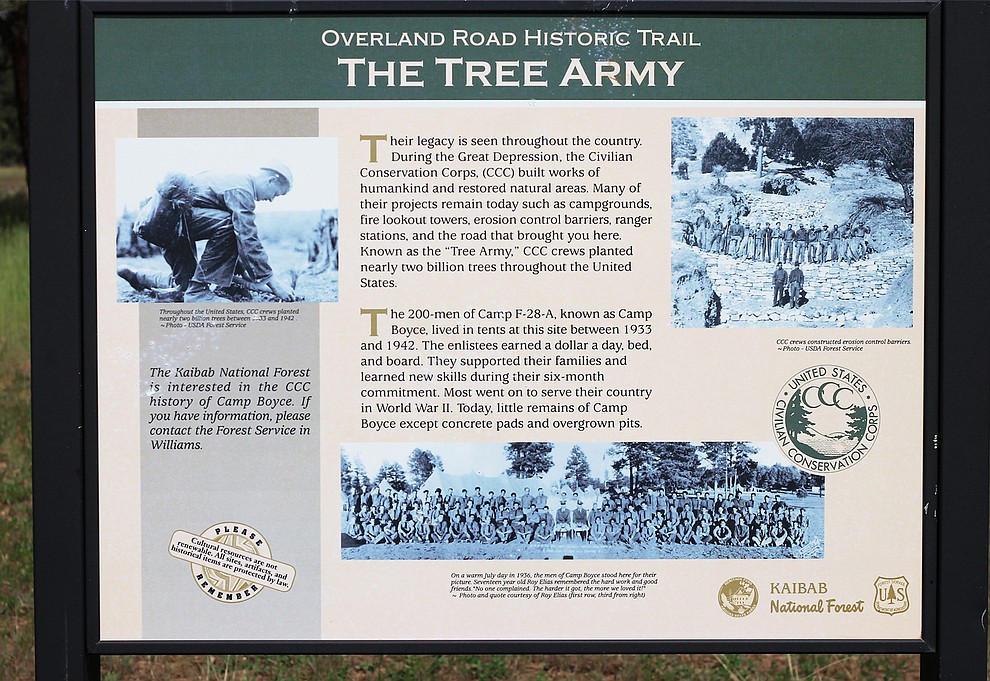 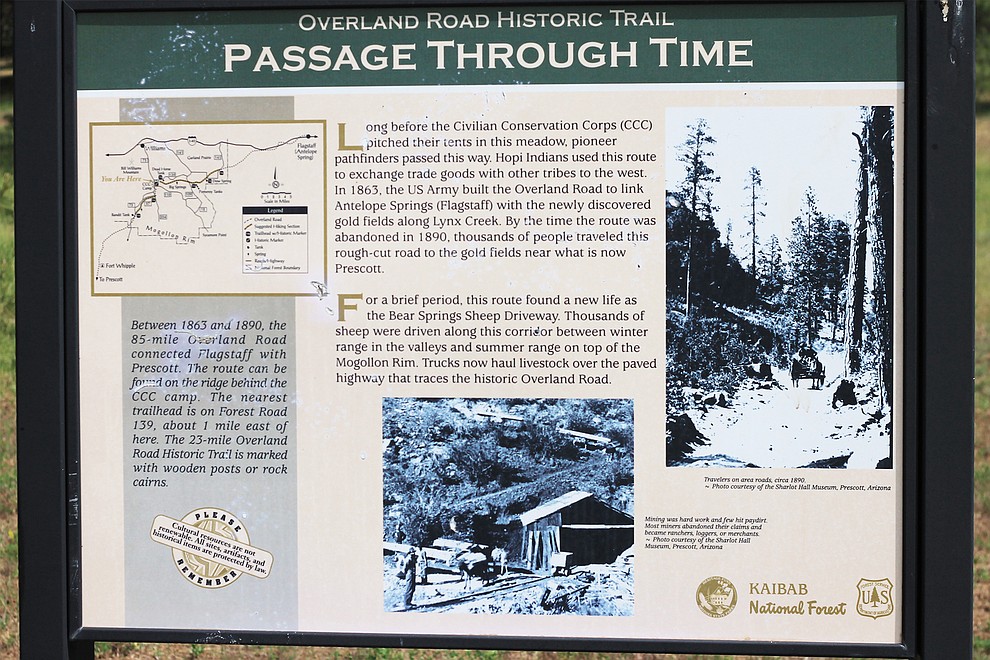 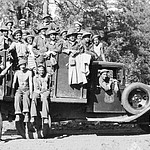 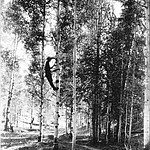 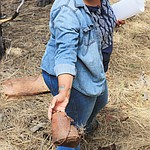 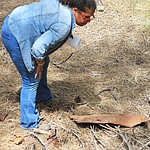 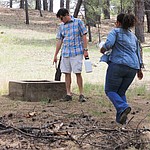 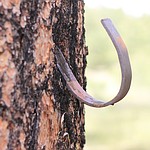 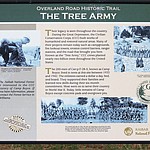 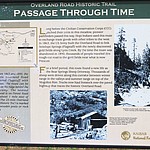 “They were working then for twenty cents an hour, ten hour days,” he said.

Wolf did not get the job though, and continued the search for a job along with hundreds of other men in the area. Fortunately for Wolf, opportunity came calling in another form when the Civilian Conservation Corps (CCC) arrived in Arizona and began recruiting young unemployed men like him.

“There wasn’t much money, very little prosperity and jobs were difficult to find,” Wolf said of work in the Flagstaff area. “Part of the recovery was brought on by the Civilian Conservation Corps.”

By 1932, the country had been suffering through the Great Depression for three years. The presidential election that year was a desperate cry for help, with electors putting their hope in Franklin D. Roosevelt and his promises of recovery with a New Deal for the American people.

Following his acceptance of the presidential nomination, Roosevelt put the New Deal into action with the passage of the Emergency Conservation Work Act which created several jobs programs, including the CCC.

Roosevelt’s love of nature and conservation was behind the idea of the CCC. After years of drought followed by poor agricultural practices, Roosevelt looked to reverse the deterioration of the Midwest plains and western forests. His idea was to recruit 500,000 men to revitalize the eroded farmlands and restore the nation’s overgrazed and over-harvested forests. He wanted to provide work opportunities, primarily for young men, to repair the land from decades of poor management and over-use.

The CCC in northern Arizona

In May of 1933, the first CCC companies arrived in Arizona at Safford and Globe. By the fall of 1933, 23 companies were at work throughout Arizona including a company in Bellemont.

According to the book "We Still Walk in their Footprints "by Robert Audretsch, 42 percent of the camps were on Arizona’s National Forests and 25 percent were in the National Parks. This included Coconino, Prescott and Kaibab National Forests.

According to Audretsch, the Kaibab was in poor condition because of overgrazing, poor logging practices and wild fires. It was hoped that the CCC could restore the Kaibab and create improvements to attract tourism.

In May of 1933, 340 CCC reforestation workers arrived at the camp in Bellemont. Of those men, 170 joined 30 local recruits and set up camp at Barney Flat, 10 miles south of Williams.

Program Manager for the Kaibab National Forest Heritage, Margaret Hangan discusses the possible use of a historic concrete pad at the 1930s Civilian Conservation Corp camp at Barney Flats south of Williams.

Initially Williams residents were leery of having two hundred strangers residing in the community, according to the Williams News, but the organization and discipline of the young men won the townsfolk over.

The CCC work on the Kaibab made headlines in the Williams News beginning with their arrival in 1933. The newspaper regularly reported meetings between the CCC camp commanders, forest supervisors, the Williams Rotary Club and the Williams Chamber of Commerce, and kept the community up to date on the work progress.

Initial meetings in the community included brainstorming about local projects. The most desired project was the construction of a road south to Perkinsville. The chamber expressed support for creating more roads for firefighting and timber extraction too.

Other work projects that made the initial list included tree fungus eradication, reworking of the Bill Williams Trail, development of Summit Spring, cutting of snag trees, extermination of porcupines, replanting of grass, and eradication of prairie dogs at Garland Prairie.

“A lot of the work was recreation,” said Margaret Hangan, Kaibab National Forest Heritage program manager. “There was no funding from the Forest Service to do recreation at that time.”

The CCC immediately began work on the Bill Williams Circle Road, the JD Dam Road and construction of Kennedy Dam (Antelope Lake). Culverts were installed on the loop road and several of the area springs had piping installed and fencing erected to keep out livestock. Recruits also began fighting some of the many wildland fires they would deal with over the next six years.

In early July of 1934, clearing began for the construction of a dam for the Dog Town project. In 1935, the CCC began the White Horse Lake project which included dam construction, fencing and development of the campground and a boat pier. The CCC also completed the Camp Clover ranger.

In 1935 the CCC built a dam and fencing at White Horse Lake, extended the Bill Williams trail with the Benham trail, built three shelters, created a lake at Hells Canyon, improved the road from White Horse Lake to Crescent Lake and built a road from Sycamore Point to JD Dam.

In January 1936, Forest Supervisor Walter G. Mann met with the Williams Rotary Club to discuss the West Cataract Dam project which would create a 70-acre recreational lake. Other projects included development of the Williams campground and improvements to the Sycamore Rim campground. A new lookout cabin on Bill Williams Mountain was to be constructed along with improvements to telephone lines, a new road to White Horse Lake, and extending the Perkinsville Road to the Mogollon Rim.

Hangan said recreation was not the primary focus of the Forest Service or the National Park Service prior to the arrival of the CCC.

“But to have access to that much labor, something the agency had never had before, was wonderful,” she said. “The good side was they built all these facilities and features. The bad side was we had to maintain all of it (after the CCC left), which was a struggle because we didn’t continue to have that level of labor.”

Crews from the Williams area CCC also joined with other crews to build a new 80-foot high fire tower and cabin at Grandview at the Grand Canyon, construct the Moqui Ranger Station (now Tusayan Ranger Station) and build the Spring Valley Ranger Station.

Departure of the CCC

Although the CCC was arguably the most popular New Deal program and the undertakings halted economic collapse, the program lost funding and support with the advent of World War II.

Most agree the CCC was successful in its intended objectives. The massive workforce was able to restore forest and rangelands while providing economic relief to unemployed youth. In northern Arizona, the CCC brought tourism to an area that had previously been dependent on grazing and timber.

Enrollees were given job training and developed skills that were transferred to other jobs and the stipend helped support family members. The CCC also provided educational opportunities for the young men who averaged only a ninth-grade education.

Wolf said the CCC had a significant impact on families in northern Arizona.

“When I went to work at Grand Canyon, I had a hell of a job,” he said. “I think I was getting $110 a month for the three months of the summer, big money. People were working year-round at Fred Harvey and were getting $60, some of them $70 a month, plus room and board. Anybody who made of $100 a month, that was big pay.”