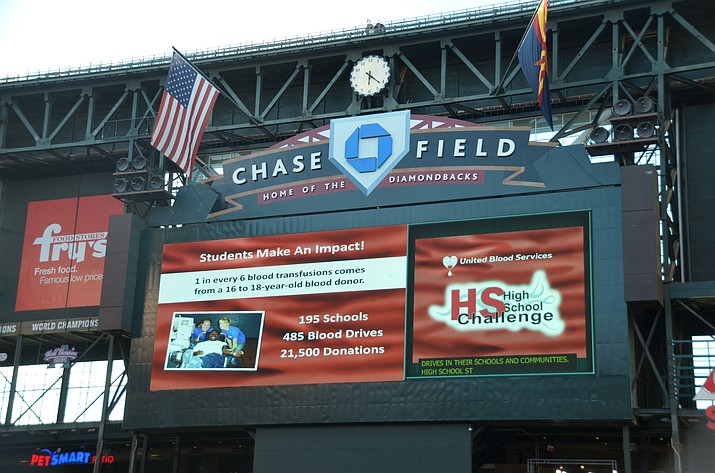 With 21,500 blood donors, teens earned the largest Arizona donor group for 13th year. Arizona High Schools were honored at Arizona Diamondbacks game for giving one in every six blood transfusions in Arizona.

ASH FORK, Ariz. — With an estimated 21,500 blood donations by the end of the school year, teens have retained their status as United Blood Services largest donor group for the 13th consecutive year.

The D-backs honored the accomplishments of students in the 2016-17 High School Blood Drive Challenge by donating 1,000 tickets to 74 award-winning schools to their May 10 game against the Detroit Tigers. Championship banners were presented on-field during pregame ceremonies to the 10 schools earning the highest honors. The D-backs invited the top two high schools to share a party suite at the game: Highland (most total donations) and Ash Fork (highest percent participation).

“High school donors are the top contributors to Arizona’s blood supply,” said Sid Lewis, Sr. Director of Donor Recruitment for United Blood Services Southwest Division. “One in every six blood transfusions comes from a teen in Arizona, far surpassing any other age group of donors.”

Teen donations have more than doubled since the D-backs signed on as sponsors of the High School Blood Drive Challenge in 1998.

“Working with Arizona’s youth to instill outstanding community values is one of our major goals,” said team President and CEO Derrick Hall. “We applaud their accomplishments and are delighted to honor them for saving lives.”

The High School Blood Drive Challenge was launched in 1984 for all Arizona high schools organizing drives with United Blood Services. Participating schools compete against other schools with a similar number of seniors to earn achievement awards. Based on percentage participation, schools that reach gold or higher award levels receive tickets to an Arizona Diamondbacks game to celebrate their accomplishments. The eight division-winning schools, as well as the two schools with the highest number of donations and the highest percent participation, are formally recognized on the field during pre-game ceremonies.