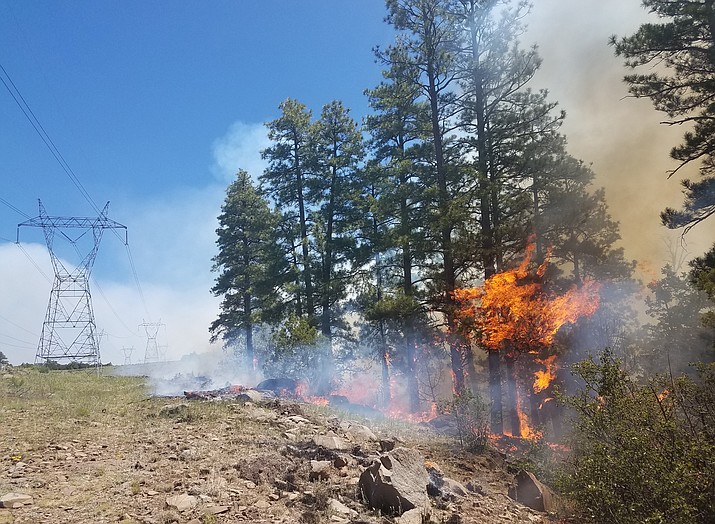 The Snake Ridge fire northwest of Clint Wells, AZ was started by lightning. The USFS is managing the fire and allowing it to burn for forest restoration.

The Snake Ridge fire, a lightning-caused fire northwest of Clint’s Well on Coconino National Forest, was called in by the Baker Butte Lookout May 19 and is now being managed by firefighters and allowed to burn. A Type 3 Incident Management Team was assigned to the fire with approximately 90 firefighters involved.

A fire on Mars Hill near Flagstaff was believed to be human-caused and another fire, near Mountainaire was, found to be caused by an abandoned campfire, one of 77 abandoned campfire reported by Coconino National Forest officials over the Memorial Day weekend.

As temperatures rose into the 80s, and dry and windy conditions with low humidity persisted, Kaibab National Forest fire managers issued their first Red Flag Warning of the season May 25, advising forest users to refrain from having campfires until the warning was lifted that evening.

At the lower elevations, forest officials implemented Stage 1 campfire and smoking restrictions on Prescott National Forest and most of the Red Rock Ranger District of Coconino National Forest June 1 because of dry conditions and high temperatures.

As always, fireworks are prohibited on all national forests.

Gordon said the winter and spring precipitation brought much needed relief from the drought, but also brought an abundance of grasses.

“These grasses are now tall and curing, making them quickly available for fast moving wildfires,” he said.

Gordon said the decision to implement Stage 1 restrictions was made in partnership with nearby agencies such as the Bureau of Land Management, Arizona Department of Forestry and Yavapai County Emergency Services,

“Just as we collaborate in training together; responding to wildfires together; and treating the hazardous fuels together; we also communicate frequently this time of year specifically to understand the conditions and coordinate the need for fire restrictions,” he said.

On Coconino National Forest, Stage 1 restrictions apply only to specific areas of the Red Rock Ranger District, including the national forest land in the Verde Valley on the east side of the Verde River, Oak Creek Canyon, lower Sycamore Canyon, lower West Clear Creek, Fossil Creek and Bullpen. The area southeast of Interstate 17, east of Forest Road 618 and north of Forest Road 214 is not included.

“Spring weather provided for a larger grass crop and fine fuels growth this year. With the current lack of moisture and rising temperatures, the potential for wildfire in these lower elevations has increased, which is why we’re going into restrictions,” said Red Rock District Ranger Nicole Branton in a May 31 media release.

Fire restrictions typically remain in effect until the forests receive significant precipitation, at which time they will be rescinded.

Forest officials would also like to remind forest users that building and maintaining a campfire on the National Forest while under fire restrictions is a violation that carries a mandatory appearance in federal court. Violations are punishable by a fine of not more than $5,000, imprisonment of not more than six months, or both.

15,316 acres were treated with prescribed fire in 2016. This was the second largest amount of acres ever accomplished and was 84 percent above the 10-year average of 8,331 acres.

On May 1, the Predictive Services section at the National Interagency Fire Center (NIFC) issued their Wildland Fire Potential Outlook for May through August.

According to the NIFC graphical outlooks for May through August, the Drought Monitor, and NOAA’s temperature and precipitation forecasts, Arizona will see an increase in fire activity in June as the region enters the heart of the fire season.

Heavy growth of fine fuels across southern Arizona have led to above normal fire potential along the Mexican border that should persist through June until the monsoonal rains arrive.

As the fire season progresses into July, there are concerns with the seasonal shift west and north into California, and the Great Basin. Exceptional winter and early spring precipitation is leading to the development of a substantial crop of fine fuels in the lower and middle elevations. The heavy loading of fine fuels could become problematic when they cure out in July.

In the higher elevations, the mountain snowpack continues to melt at a normal to slower than normal rate. This should produce a delay in the onset of significant fire activity in the high elevations.