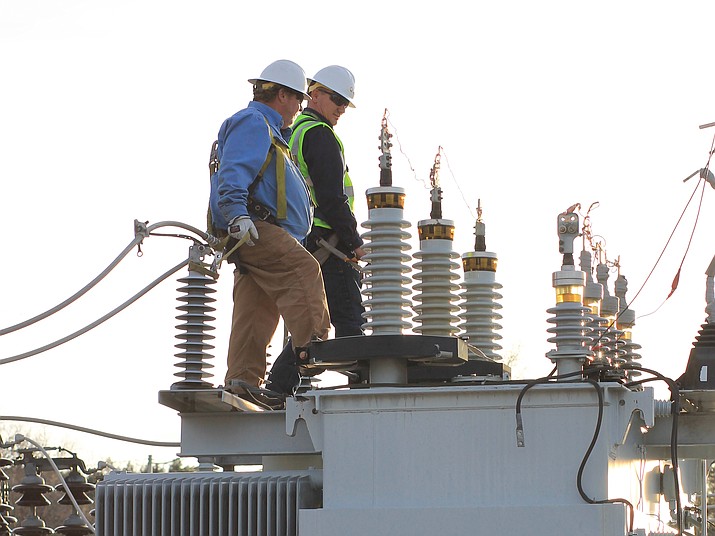 APS employees work to restore power after a squirrel damaged a transformer in March 2017. APS is working with the city of Williams to upgrade the city’s electric system.

A consultant with Arizona Public Service (APS) confirmed the need for the city of Williams to upgrade the city’s electrical infrastructure during a presentation before the Williams City Council and city staff May 25.

Consulting Engineer Barbara McMinn led the discussion by presenting the results of the APS Five Year Planning Study of the Williams’ electrical distribution system. She was asked to determine what facility additions, upgrades and changes are anticipated within the 2017-2021 study period.

The study began with a forecast of the electric loads on each feeder and substation transformer in the city’s system. The city has already been gradually converting 4kV areas to 12kV.

The Garland Prairie, Kaibab Temporary and one of the three Williams feeders have been upgraded from 4kV and are now operated at 12kV. The varying system voltages create operational challenges and present concerns for field personnel regarding ensuring electric lines of differing voltages are not connected during switching operations.

The city began discussions for building a new substation in 2004 knowing new development would be hindered without an upgraded system.

To handle the imminent electrical upgrades, the city implemented a 3 percent electric rate increase in 2011.

APS, at that time, recommended upgrading the city’s system as the load on the transformer servicing the city during peak usage was near capacity.

The only substation was located on Oak Street between Sixth and Seventh Streets. After much discussion, Williams City Council approved funding for a new substation in. The substation was completed in February 2015 on Ellen’s Way and Airport Road.

City Manager Skylor Miller said the city requested the five year study from APS to plan for future growth. He said some work has already been completed as part of the project with redistribution and upgrades from 4kV to 12kV.

“Williams is enjoying some good growth,” McMinn said. “We recommend over time that you continue your conversion of the 4 kV system to 12 kV with the end goal of eventually converting the entire system so that you have that greater level of capacity.”

McMinn said the study looked at several years of actual past loads, any projects they knew about that were in the design phase or still just conceptual, and also looked at general load growth.

Besides the 4kV to 12kV upgrades, she recommended the city consider purchasing a spare distribution transformer that can be used for emergencies.

“If you were to lose one of those transformers, you would have the ability to carry loads without a mobile substation coming in or having to take rolling blackouts,” she said.