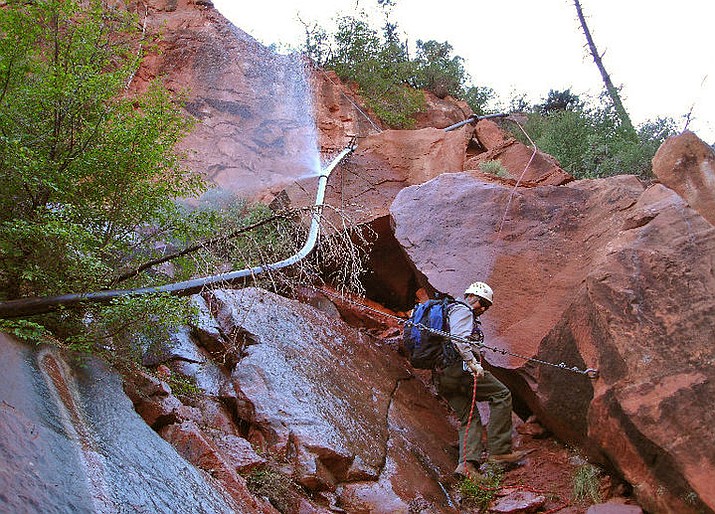 A pipeline break caused the park to levy water conservation measures in 2017. 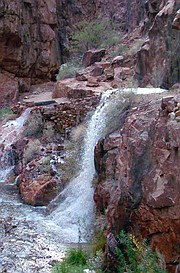 Water gushes from an earlier pipeline break beneath the North Kaibab Trail, closing it for extensive repairs.

GRAND CANYON, Ariz. — Protracted maintenance costs, catastrophic breaks and the reliance of millions on the Trans-Canyon Pipeline for water has made replacing the aging pipeline a top priority of the National Park Service.

Grand Canyon National Park officials outlined two current proposals to replace the pipeline, which has far exceeded its original 30-year life expectancy. The park is currently accepting public comments on the proposals, which can be mailed or submitted online through Aug. 7.

The aluminum pipeline, which was built in 1965, carries water to the South Rim from Roaring Springs, located just below the North Rim. The original pipeline was designed to last for about 30 years. The pipeline is constructed of 16 miles of aluminum pipe with nearly 2,000 vertical and horizontal bends. A large portion of the transept piepline — the part that traverses from the North to the South Rim, is constructed beneath the North Kaibab Trail, although parts of it are explosed. These exposed lengths of pipe are vulnerable to rock slides and floods, causing a majority of the breaks.

According to the park, the pipeline has suffered more than 80 breaks since 2010, including major breaks that required emergency water conservation measures and water hauling to both the North and South Rim.

Kris Provenzano, who is currently serving as the park’s interim chief of maintenance, is the project’s director. Based out of NPS’ regional office in Denver, Provenzano has been overseeing the formulation of the two proposals under consideration.

Provenzano said NPS arrived at the two proposals by evaluating the current technology available and assessing how it could, or could not, be used at the park.

“We looked into a lot of things, a lot of technologies that are currently being used at other sites,” she said. “We explored directional drilling, which would allow us to be a lot more flexible in where we placed the pipeline to avoid some of the treacherous terrain that we’re now dealing with.”

In directional drilling, the channel for the pipeline is drilled in a way that avoids natural obstacles and can be directed around steep terrain, even so far as installing the pipe at a 90 degree angle, Provenzano said. The drilled channel must be filled with slurry, though, to keep it from collapsing before the pipe is laid. Provenzano said a project this large would require massive slurry ponds, which would destroy far too many resources to be viable.

Provenzano said the proposal team also considered lining the existing pipe with a collapsible, rubber-like liner, which would fit inside the pipe and insulate it against leaks, as well as strengthen the aging aluminum. That process was deemed too costly, however, as the current terrain would make installation extremely difficult.

After ruling out those alternatives, the park has settled on two courses of action: replacement of the entire pipeline as it is currently situated, or removing the interior transept pipeline entirely and building a new intake valve near Phantom Ranch.

Replacement in kind, she said, is exactly what it sounds like — the entire pipeline will be replaced with a stronger steel pipeline along the same route it currently traverses, from Roaring Springs to Indian Garden beneath the North Kaibab and Bright Angel trails. The project is expected to cost up to $124 million.

The other proposal, and the one park officials are currently considering as the best option, is to remove the middle of the pipeline and move the intake for the South Rim to Phantom Ranch. Roaring Springs would still be used to supply water to the North Rim, and water for the South Rim would be taken from Bright Angel Creek and pumped up to holding tanks on the rim.

This proposal would eliminate difficult maintenance through the middle of the canyon, and eliminate disruption and trail closings on the North Kaibab Trail. It would also require building a few new water treatment stations.

“We’re taking water from the same source, Bright Angel Creek, but just a little further down the line,” Provenzano said. “Because it’s considered surface water down there, as opposed to Roaring Springs, it will need to be treated more before it’s considered drinkable.”

While the initial outlay of funds may be more expensive — new sections of pipeline plus three or four treatment plants —costs over the long term are likely to be similar, with long-term maintenance and repair costs for the full pipeline eventually equaling or passing the one-time costs to build the plants.

Jeff Olson, chief of communications for the park, said the replacement of the pipeline is near the top of the list for the NPS on a national level. The project has been placed in the agency’s Green Book, a list of projects and their expense for the NPS as a whole.

Olson said money has been allocated for the project beginning in 2019 and continuing for three years. The park will match 50 percent of the funding through monies collected as part of park and concession fees.