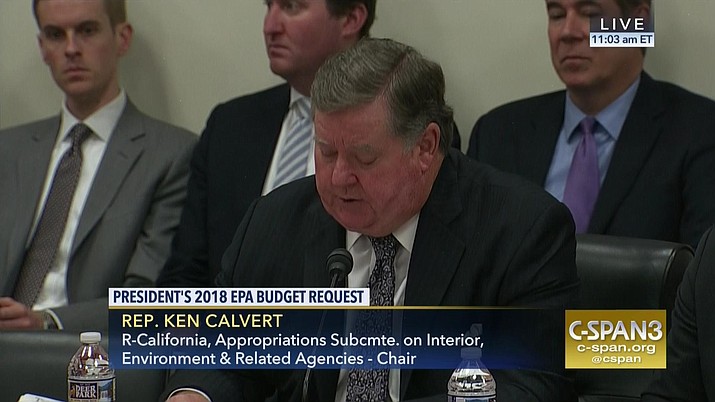 House appropriations subcommittee chairman Ken Calvert outlines the preliminary budget for the Department of Interior in a hearing July 12.

The bill, which covers everything from the National Park Service to Indian Health and Education Services, was introduced for an initial mark-up by a small group of House Appropriations Committee members. Subcommittee Chairman Ken Calvert (R-Calif.) worked with ranking member Betty McCollum (D-Minn.) to produce the bipartisan bill, which totaled just under $32 billion in funding for the Department of the Interior, the Bureau of Indian Affairs and Education, the Environmental Protection Agency (EPA) and the National Park Service (NPS), among others.

Overall, Calvert said, the Department of the Interior, which has jurisdiction over federal environmental and Indian agencies, will receive $31.5 billion for FY2018 — $824 million less than allotted in FY2017 but more than $4 billion more than suggested by the Trump administration.

“We have made a sincere effort to prioritize critical needs within our subcommittee allocation and in reviewing nearly 5,200 member requests,” Calvert said.

NPS would receive $2.9 billion under the bill, around the same as FY 2017, although Calvert noted the subcommittee allocated an additional $10 million for construction and keeps in place the increases for ongoing deferred maintenance and operations costs requested by the Obama administration. The bill also keeps funding in place for popular bipartisan environmental initiatives, including the Great Lakes Restoration Initiative ($300 million) and the Land and Water Conservation Fund ($275 million).

Under the proposed bill, the EPA took the biggest hit, with funding reduced by 6.5 percent to $528 million. Although overall funding was reduced, the subcommittee allocated funds to accelerate the cleanup process nationwide of Superfund and Brownfield sites, many of which are located on tribal lands. The bill offers an additional $47 million for the continuing cleanup of Superfund sites and $10 million in Brownfield funding. Superfund is a federal program which funds the cleanup of sites contaminated with hazardous or radioactive chemicals. Similarly, Brownfields are considered lands which have been previously developed as industrial sites but have fallen into disuse.

The bill also maintains $465 million for the Payments in Lieu of Taxes (PILT) program that counties with large Native populations rely on for funding, since they cannot derive property tax revenue from tribal lands in their jurisdiction.

Not everyone was in agreement with the bill’s priorities.

McCollum said she could not support the bill in its current iteration, stating that some funding levels were too low, including funding for wildland fire operations.

The bill is currently funding wildland fire suppression accounts at the 10-year average, although forest service officials have said that this year’s fire activity has exceeded that of the past few years by a wide margin. Although the bill provides an additional $5 million for hazardous fuels reduction specifically, McCollum voiced her concerns that needs were going to be unmet as fire operations ate into funding for other programs.

“I can’t sit still while wildland fire eats up the core missions of other departments,” she said.

Overall, however, McCollum said she and other ranking members of the group were committed to working together to make changes with bipartisan support.

“Although I can’t agree with these cuts, this plan does continue many important programs,” she said. “I know we can work together in a bipartisan effort, but this bill is not going to get us there.”