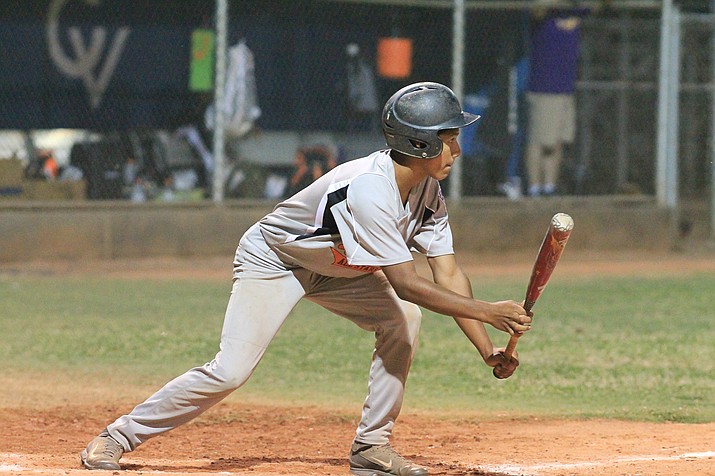 Mario Vasquez gets ready to bunt during the District 10 Championship game with Verde Valley July 11.

Verde Valley won the tournament and moves on to the state tournament this week in Phoenix.

Cody Jensen watches the game from the dugout.

After a loss in the first round against Wickenburg that moved them to the loser’s bracket, Williams rallied to beat Camp Verde and face Wickenburg once again in the semifinals.

Hoping to avoid another loss that would eliminate them from the tournament, Williams came back with a vengeance to beat Wickenburg 14-4 to move into the championship game. 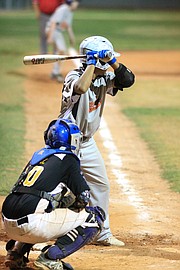 Joe Siegfried waits for a pitch.

Behind the pitching of Cody Jensen, Williams put a quick stop to Wickenburg as Zain Grantham caught a line drive off the first batter. Jensen struck-out the second batter, retrieved a bunt and caught the next runner heading to first to end the first inning.

Grantham and Mario Vasquez started off the inning for Williams with walks, followed by a base hit by Caesar Santana, an RBI by Jensen and a walk by Jesse Howell to put three runs on the scoreboard.

Williams allowed one hit in the second for Wickenburg with Grantham bringing in the sole run for Williams to end the inning 4-1.

Williams got their only scare of the game when Wickenburg brought the game to 4-3 because of several Williams’ errors.

Santana launched a triple in the third, followed by base hits by Howell and John Bryant to bring Williams up 6-3 at the end of the 4th inning.

Wickenburg failed to recover, scoring one run in the fourth as Williams continued their onslaught until the game was called on the 10-run rule with Williams taking the win 14-4.

Williams headed to the championship game with Verde Valley July 11 after Verde Valley’s win over Wickenburg the night before.

Verde Valley jumped out to a 9-3 lead, but in the sixth and seventh innings, Williams rallied to tie it at 9-9 and force an eighth inning. Williams scored five runs in the sixth and one in the bottom the seventh on an error.

With only two innings to go, Williams capitalized on weak pitching by Verde Valley in the bottom of the fifth.

Verde Valley walked three Williams’ batters and struck one with a pitch to load the bases and bring in a run. Base hits by Bryant and Jensen, followed by more walks, some base stealing and a base hit by Luis Urias, tied the score 8-8.

Verde pulled in one run in the sixth and Grantham scored in the seventh to keep the game even at 9-9.

With two outs and the bases loaded, Williams allowed a pick-off at first to end the rally for Williams in the seventh.

Going into extra innings, Williams could not hold on, allowing Verde Valley to score three runs to win the tournament.