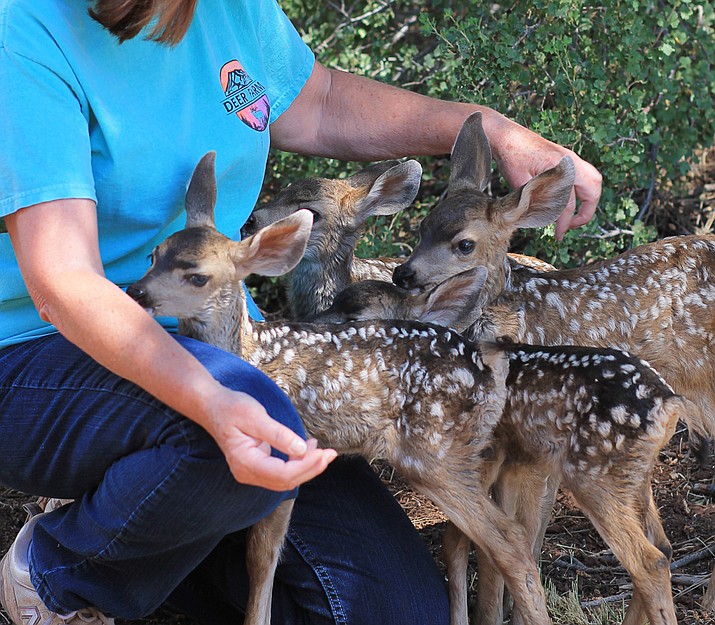 Four fawns were displaced by the Goodwin Fire in early July and relocated by Arizona Game and Fish Department to the Grand Canyon Deer Farm.

In the shade of a picnic table, four oversized floppy ears peak up above a slight depression in the ground. Below the ears, four huge, dark eyes gaze up. These are deer fawns, so young they still have spots and barely reach the height of a person’s knee.

These Arizona fawns have become famous as a result of their rescue from the Goodwin Fire near Mayer. Their images have been splashed on print and broadcast media across the state.

Despite the efforts of firefighters and wildlife officials to reunite the fawns with their mothers, the

Displaced deer fawns rest in the shade at the Grand Canyon Deer Farm and Zoo July 6.

four fawns were relocated to the Grand Canyon Deer Farm and Zoo the first week of July.

According to Patricia George, owner of the deer farm, two of the fawns were in danger of being harmed by the blaze near Poland Junction June 30. Initially 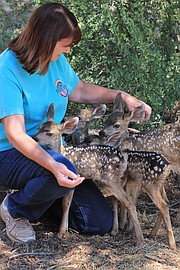 Patricia George tends to four fawns separated from their mothers during the Goodwin Fire. The fawns were gathered by firefighters and relocated to the Grand Canyon Deer Farm and Zoo.

the two were captured and released into a safe area so they could be reunited with their mother. After giving the mothers time to reunite, firefighters chose to gather the fawns because of the approaching fire line, and remove them to safety.

“They took four babies and released them on the other side of the fire line,” George said. “Three of them were reunited with their mothers, but the fourth was found still loitering around so they picked her up and brought her in.”

Patricia George, owner of Grand Canyon Deer Farm and Zoo, feeds two rescued mule deer brought to her from the Arizona Game and Fish Department. George uses the deer to educate the public about taking animals out of the wild.

George said it was unusual to find so many fawns in one area and firefighters were surprised to come across them.

George said she worked with Arizona Game and Fish Department (AZGFD) officials to have the fawns brought to the deer farm.

“I got a call about the twins (the first two fawns) a week ago Wednesday,” George said. “The Heritage Park Zoo couldn’t take them so they called me.”

George has taken in rescued animals before, but said she is required to get AZGFD permission first. George said she was happy to take the fawns into her facility, but was sad to have them removed from their home and separated from their mothers.

“These guys obviously needed to be rescued,” she said. “But I’d much rather see these guys out running with their mammas than being here.”

George said she tries to educate her customers about leaving wildlife in the wild. She has a sign posted inside the park with information and hopes to use the new fawns as an educational tool also.

A firefighter carries a fawn away from the flames during the Goodwin Fire in early July.

The Arizona Game and Fish Department shares concerns for the communities and people impacted by wildfires and appreciates the efforts of the crews fighting the fires.

The department also monitors the impacts wildfires have on Arizona’s wildlife species.

“Our hunters, anglers, wildlife watchers and outdoor recreationists all have questions and concerns for our displaced wildlife,” said Larry Phoenix, AZGFD Field Supervisor, Flagstaff Region. “The deer fawns recently rescued from the Goodwin fire by firefighters was a somewhat rare event and were probably too small to escape and may have become separated from their mothers. In most cases wildlife aren’t going to stick around as flames close in on their location.”

When it comes to wildfires, each wildlife species has its own set of survival techniques. Larger animals, such as deer and elk, move out of a fire’s path. Smaller mammals and reptiles burrow underground or in rock dens and let fires pass over. Birds will simply fly to safety. Research has shown that burrowing even six inches underground will protect animals from fires reaching up to 2,000 degrees above ground. Animals have been observed in areas within hours and days following a recent wildfire.


It’s impossible to determine how many animals survive wildfires and how many are lost, but records of past fires show that wildlife mortality is substantially lower than one might imagine. Wildlife may be impacted and killed more from smoke than burns or other injuries obtained during a wildfire. Nestling or young fledgling birds, along with young turkeys, can be among species that may have a difficult time escaping a wildfire. Overall, the survival adaptations wildlife possess are significant when wildfires occur.

Fisheries resources are normally able to survive the immediate conditions of a wildfire including flames, heat and smoke. However, fish and their habitat are very susceptible to intense flooding, increased erosion, and slurries of ash that can follow a wildfire during significant precipitation events. Ash slurries can be toxic to some fish. The increase in nutrients may lead to late summer algae blooms that may trigger summer kill conditions, high pH and low dissolved oxygen.

Wildfires and how they burn are of interest for department biologists. If it is a high intensity fire, most of the wildlife habitat in the area is destroyed and will take many years to recover. These areas will have little to no habitat value and no longer provide adequate food and cover resources for most wildlife.

Moderately burned areas may include partially burned habitat and may not be totally damaged. These areas provide some levels of suitable food and cover in the short term for wildlife species that are dependent on a mix of open and closed vegetation. Species that may benefit from these conditions include a variety of birds, such as robins, woodpeckers and Stellar jays, and mammals, such as chipmunks, golden-mantled ground squirrels, turkey, deer and elk.

Low intensity burned areas are those that receive relatively light, partial damage from the fire. In most cases, it simply burned the above-ground portion of the understory, and either partially burned or scorched midstory shrubs and overstory trees. The adverse effects of this type of burn are low. These areas are of key importance for wildlife habitat as the tree overstory redevelops in burned areas over a long period of time.

AZGFD reminds people that if an animal appears to be injured or orphaned, think twice before picking it up. An animal will get used to human presence, and may be doomed from being able to survive in the wild in the future. If a baby animal is found, don’t assume it’s orphaned and in need of help. This is especially true of elk calves and deer fawns.

If you see wildlife in places where they don’t belong, acting strange, or appear sick or injured, call the Arizona Game and Fish Department’s 24-hour radio room at (623) 236-7201.

More information about the department and Arizona wildlife is available at www.azgfd.gov.