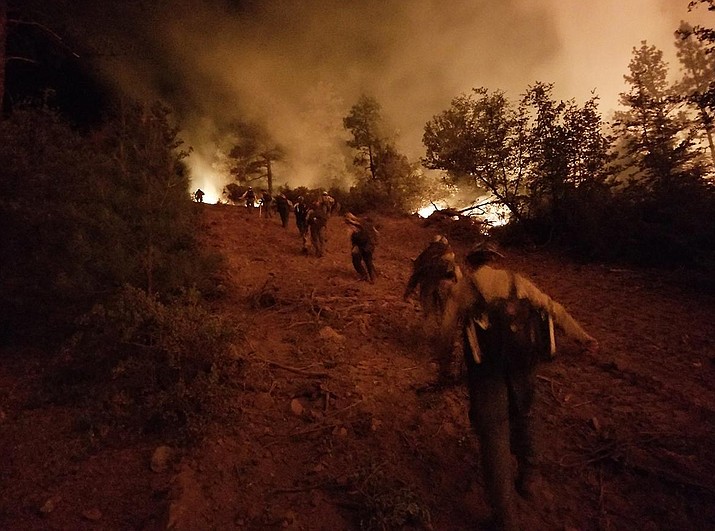 Firefighters hike up a hill during burnout operations on the Goodwin Fire July 1.

White Spar, Groom Creek Horse Camp, and Lower Wolf Creek campgrounds; and all trails and trailheads west of Senator Highway, as well as the full extent of the Prescott Circle Trail, will open to the public on Sunday at 2 p.m.

All sites will be first-come, first-serve.

Prescott National Forest lands east of Senator Highway (County Road 57) continuing south on Forest Road 94C, then east along Forest Road 82A up to County Road 178 to the forest boundary and generally from Mayer north to Prescott Valley will remain closed to the public until conditions are deemed safe.

The closure area includes the Lynx Lake Corridor, Upper Wolf Creek, and Hilltop Campground. They will remain closed as a precautionary measure to ensure public safety and to allow safe travel for those involved in the Goodwin Fire.

For a complete description of the closure area and map, visit the Prescott National Forest website www.fs.usda.gov/p...

The gains were as of Sunday evening on the fire, which started in the Bradshaw Ranger District 14 miles south of Prescott on June 24. The cause remains under investigation; estimated containment is expected Thursday, July 13.

Authorities have yet to release details concerning how many and what type of structures have burned. They have reiterated at news conferences they are assessing losses as they regain access to those areas.

Currently, 873 personnel are assigned to the Goodwin firefighting, according to inciweb.nwcg.gov, which is down from 1,222. The fire is burning in predominantly dense chaparral and Ponderosa pine stands in drainages.

"Firefighters made excellent progress overnight burning out an area near the northwest corner of Big Bug Mesa, east of Breezy Pines," the news release states. "The burnout operation is expected to be complete (Sunday). Additional fire retardant has been applied on this section of the fire to help reinforce the perimeter."

Patrolling, mopup and fireline rehabilitation continues to take place along the 62 miles of fire perimeter. Patrol flights on Saturday saw little smoke coming from the southern and eastern portions of the fire. However, smoke could be seen from burning interior islands of vegetation and the burnout operation in the northwest.

The public is reminded that smoke seen coming from interior portions of the fire is not a cause of concern at this time. Some ash devils were noticed Saturday and firefighters remain vigilant to ensure embers are not carried across firelines.

Winds are expected to be higher Sunday with gusts from the southwest possibly reaching 25-30 mph.

Although some evacuations have been lifted and roads reopened, property owners are urged to remain vigilant and monitor fire news. There is still active fire behavior, particularly in the northern portion of the fire, and conditions can change easily if impacted by high wind events.

The Blue Hills/Upper Blue Hills area has fire suppression sprinklers that were installed by firefighters in various portions of the community, the news release states. Please keep these areas clear and allow fire officials access to do their work.

For additional information regarding evacuations and pre-evacuations, call the Yavapai County Emergency Operation Center at 928-442-5103, from 7 a.m. to 7 p.m.

Sheriff Scott Mascher met with Fire Incident Commanders on Sunday morning and learned that "back burning" operations are ongoing in an effort to assure a margin of protection from fire for the Walker and Potato Patch areas, the YCSO reported.

As a result, it is not expected those evacuations will be lifted Sunday, but "potentially" Monday. "Again, fire behavior will dictate the final decision but crews are doing an amazing job in this endeavor," a news release states.

"All cooperators involved in the Goodwin Fire truly appreciate the community cooperation and support, and understand the desire of residents to get back in their homes. Please remember this fire-fighting strategy is critical to continued success and the goal of full containment," YCSO Media Relations Coordinator Dwight D'Evelyn wrote.