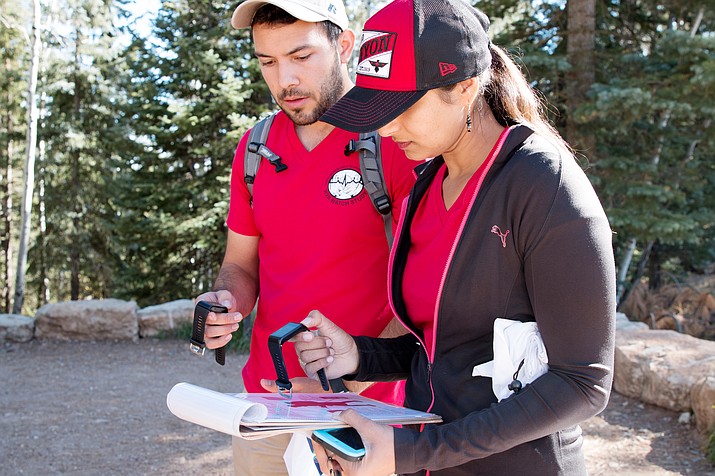 LIVERMORE, Calif. — It takes a special type of person to hike from one rim of the Grand Canyon to the other in a single day. These motivated, resilient athletes now are helping researchers at Sandia National Laboratories and the University of New Mexico (UNM) to collect and study biometric data to determine if declines in physical or cognitive functions can predict a medical emergency.

Called R2R WATCH, for Rim-to-Rim Wearables at the Canyon for Health, the study draws on the research team’s expertise in biology and cognitive science. Volunteers take surveys and cognitive tests and provide basic medical information, such as weight, blood pressure and blood samples, plus data from wearable fitness devices.

“The overall goal is to determine if a pattern of biological and, more uniquely, cognitive markers can be identified that precedes serious health events, such as hyponatremia, a decrease of sodium levels in the blood,” said Glory Aviña, cognitive psychologist and Sandia principal investigator for the study.

Jon Femling, emergency room physician and an assistant professor at UNM, said, “Trauma is difficult to study because you generally can’t plan for it, but if people are willing to put their bodies through a hike this extreme, we can learn a lot.”

The three-year research project, funded by the Defense Threat Reduction Agency (DTRA), joined an existing study of rim-to-rim hikers conducted by UNM. The UNM investigation began in May 2015 in partnership with the National Park Service (NPS) with surveys of hikers at the start and end of their hikes. In May 2016, an expanded version of the study asked hikers for volunteer blood samples and detailed information about what they ate and drank on their journeys.

The rim-to-rim hike is the equivalent of a marathon in distance, with a 1-mile change in elevation and temperatures that range from below 30 degrees Fahrenheit to more than 110 degrees. In addition, the Grand Canyon rim-to-rim hike is an inverse challenge; the first half is easier than the second.

“In most challenging hikes, like Mount Whitney in California, if you become exhausted, you can turn around and head downhill,” said Cathy Branda, research geneticist and Sandia’s project manager for the study. “In the Grand Canyon, it’s very easy to underestimate just how difficult it is to hike out of the canyon.”

The original study came about because the NPS experienced a series of challenges with rim-to-rim hikers, including an increase in requests for assistance, which greatly taxed the rescue resources in the park. With a small staff, rangers were becoming dangerously fatigued with the number of rescues occurring on peak R2R weekends.

During the peak spring and fall seasons, as many as 1,100 people per weekend set out on a rim-to-rim hike. According to NPS, about 350 people are rescued from the Grand Canyon each year, 150 to 180 by helicopter.

The prevalence of hyponatremia has increased, especially in rim-to-rim hikers. Analysis of blood samples from the May 2016 UNM/NPS rim-to-rim study showed that one hiker was moderately hyponatremic at the trail end. Acute hyponatremia can cause cerebral edema, or brain swelling, which in turn can lead to coma or death within hours if left untreated.

Treatment of this type of hyponatremia, known as exercise-associated hyponatremia, requires a specialized set of skills. Insights from the R2R WATCH study will provide a deeper understanding of the illness to improve preventive education and treatment.

Study participants took fast-paced electronic tests involving colors, arrows and happy and sad faces — before their hikes, at three-hour intervals and at the end.

“The tests measure their working memory, executive function and other cognitive factors that could be used as early health indicators of performance,” Aviña said. “For example, we expect that as people are more physically tasked, their reaction time will slow.”

Two of the study’s goals are to determine which commercial off-the-shelf devices work best in extreme environments and to identify the physiological and cognitive markers that provide the earliest, yet reliable, indication of health decline.

“The project enables us to use real-time data collection and quantitatively show how markers relate to a non-laboratory, mission-relatable performance task,” Aviña said. “Findings on individual markers will also inform which wearable devices are most useful both in the attributes they measure and the logistics of use.”

She also is using Sandia’s expertise in device development and cybersecurity to identify how data can best be collected and protected, especially since network connectivity in the Grand Canyon is inconsistent and unreliable.

The team is evaluating the devices, extracting the data from each wearable device and analyzing the results. It is looking for relationships between physiological and cognitive markers, as well as performance and health outcomes. They will determine which devices were the most effective in terms of battery life, functionality and the ability to accurately capture physiological markers.

These results will feed into the next round of data collection for the R2R WATCH study, scheduled for May 2017.

“This initial study of both physiological and cognitive markers was a great success. We collected wearable device data from 50 people, and over 100 people participated in the overall study in one weekend,” Branda said. “But this is just the beginning. This unique setting and our partnership with UNM and the NPS create the opportunity to learn a great deal about predicting medical events. We expect to have more participants and to be more targeted in the data we collect at the next study in May 2017.”