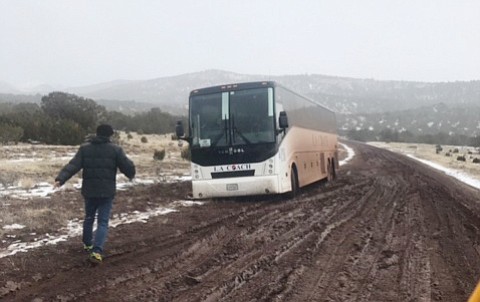 COCONINO COUNTY, Ariz. — Snowfall ranging from 18 inches to more than three feet left its mark on the landscape — and Coconino County search and rescue's assignment log.

The Coconino County Sheriff's Office (CCSO), which handled many of the search and rescue calls, said they participated in several rescue operations through the area after two wave of snowfall hit the area Jan. 19-24.

The Arizona Department of Public Safety (AZDPS) received the 911 report Jan. 23 of a tour bus that had become stuck in mud along a remote forest service road. State troopers located the bus, carrying 44 Korean tourists, along Forest Service Road 417, about about 20 miles southeast from Valle and about 30 miles northwest of Flagstaff.

According to CCSO, the bus driver told troopers he was traveling to Page, Arizona, when he decided to take an alternate route recommended by a GPS device because of the winter storm and roadway conditions. The alternate route was Forest Service Road 417, which cuts through the remote Coconino National Forest, bypassing Flagstaff. The driver said he decided to turn back when he realized the road was not safe. The bus then became stuck in the mud.

An attempt to move the bus with a heavy duty tow truck failed because of the poor conditions. Although freezing temperatures, snow fall and darkness began to set in, the tourists were able to keep warm because the bus was topped off with fuel and able to remain running while waiting for help.

ADOT plowed the snow off of SR 180 in order to clear an access route from the scene to the command post, which was located near the junction of SR 180 and FS 417. Troopers and a citizen began shuttling the tourists and the bus driver in their vehicles to the command post. A Williams School District bus transported the tourists back to Valle were lodging accommodations were made.

“Being stranded on a remote forest road, in a snow storm and darkness approaching was a dangerous situation for all involved, said AZDPS Captain Ezekiel Zesiger. “The helpful citizen and multi-agency team are grateful to have been able to successfully ensure the rescue of the Korean tourists.”

The rescue efforts were executed by a citizen who stopped to assist, DPS, Coconino County Search and Rescue, ADOT and the Williams Unified School District.

A tour bus mired in mud on a dirt road is difficult enough, but search and rescue teams also responded to other calls from around the area, including two skydivers from Paragon Skydive who became lost in Kaibab National Forest after missing their designated landing zone. CCSO Commander Rex Gilliland said the two skydivers, a student and instructor who jumped in tandem, had jumped too early and missed their designated landing zone by nearly two miles, and became stranded in deep snow in the forest. After attempts to reach the skydivers by vehicle failed, the National Park Service was able to evacuate them by helicopter. They did not need medical attention.

Rescue teams also responded to a call from the remote Jacob's Lake area after two visitors set out snowmobiling from the lodge and did not return by nightfall. Classic Air Medical performed a search for the lost visitors on their way back to base in Page, Arizona. The men reported that they encountered deep snow on their way back from the North Rim and they had to stop to dig themselves out after becoming stuck. They didn't require medical attention and made it back to Jacob Lake Lodge around sunrise.

Last month, an 11th hour rescue to save another group of stranded tourists, a family from Pennsylvania, was successfully orchestrated near the North Rim of the Grand Canyon. Karen Klein’s vehicle became stuck in the mud after the family discovered Hwy. 67 was closed for the winter and a GPS device indicated that they could still travel to the North Rim via a forest service road. The family was rescued after Klein’s husband was able to hike to the top of a nearby hill to call for help; Klein had already trekked more than 25 miles in winter storm conditions to a North Rim facility, where she was later found and transported to a hospital.

AZDPS reminds the public to be wary of traveling on a dirt road as an alternative to a highway — highways are regularly maintained and patrolled by authorities. Forest service roads, dirt roads or back roads may not be maintained during the winter and may travel through areas where motorists cannot get a cell phone signal to call for help.