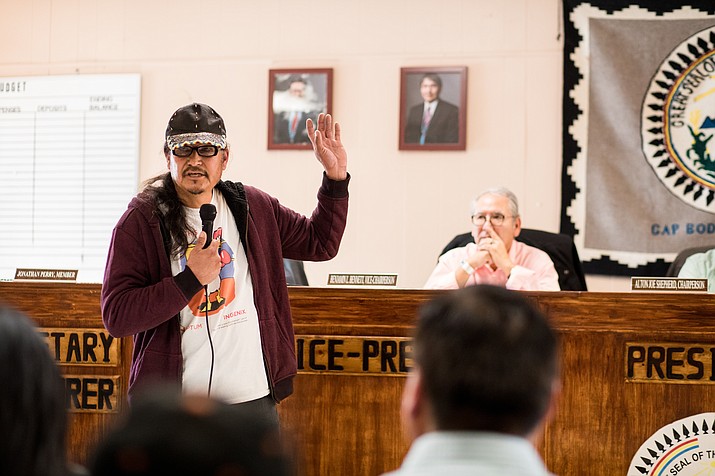 BODAWAY/GAP, Ariz. — A full house at the Bodaway/Gap Chapter waited five hours Jan. 11 for the Resource and Development Committee (RDC) to sort through other matters before tabling legislation that sought to approve the master agreement for the Grand Canyon Escalade project.

The master agreement includes the approval of $65 million to develop offsite infrastructure for the project and would also authorize the Navajo Nation Hospitality Enterprise to enter into a development and operating agreement, approve a non-compete agreement, waive certain provisions of the Navajo Nation Code and accept the approval of a land withdrawal in the Bodaway/Gap Chapter.

Confluence Partners, LLC, from Scottsdale, Arizona, hopes to build a gondola tramway delivering visitors to the canyon floor in about 10 minutes. The project would include a river walk in the canyon with an elevated walkway and a food pavilion. The area is located on the western edge of the Navajo Nation at the confluence of the Little Colorado River and the Colorado River about 100 miles by road from I-40 and Flagstaff, Arizona.

The proposed legislation was unanimously opposed by the Law and Order Committee Oct. 10, 2016. The Resource and Development Committee said the legislation was lacking in some detail, which R. Lamar Whitmer, of Confluence Partners, said he is addressing.

Whitmer was on hand for the meeting at The Gap, where about 100 community members attended the meeting. He said in an email after the meeting that the committee tabling the legislation tells him that several members of the committee want to have a serious and thorough consideration of Escalade together with their colleagues when the entire council votes on the project.

“It was very positive (tabling the legislation) in that this was the first time any of the council delegates were able to see that there is substantial community support,” Whitmer said. “At the meeting, our chapter supporters outnumbered Grand Canyon Trust’s paid protestors two to one, contrary to what Grand Canyon Trust’s paid protestors have been telling that Escalade lacks local support.”

Don Yellowman, president of the Bodaway/Gap Chapter, said he believes Whitmer wants to give a false impression that Confluence Partners has the support of Bodaway/Gap community members.

“In fact, your readers should know that the Resource and Development meeting was rescheduled several times,” Yellowman said. “And, in the end, the community members were not informed of the meeting in a timely manner, resulting in the audience being primarily made up of Confluence Partners typical follower/supporters.”

Save the Confluence, an organization made up of some families in the area, said the committee got to see the list and names of around 35 grazing permit holders who are opposed to the project. They said a large portion of the attendees at the meeting were the land users and permittees, who are from the canyon/confluence area, and who oppose the project.

“We believe the committee has been told by developers that the entire community supported the Escalade bill, but the committee witnessed a deep division,” the group said. “The Confluence Partners have constantly provoked animosity by spreading rumors that the area is not sacred. They disregarded the statements by the Navajo Nation Historic Preservation Department. They disregarded our neighbors, the Hopis. They tell others that the families don’t live there and they are all paid activists.”

A representative from the Hopi Tribe, representing Hopi Tribal Chairman Herman Honanie, handed out a flyer before the meeting reiterating the Hopi regard the confluence with the utmost respect and reverence for its central role within Hopi history and culture.

“More importantly, it would be well for the Navajo Nation Council to recall there is a formal legal precedence that will be violated with the Escalade project,” the flyer from the tribe said.

The tribe said the 2006 intergovernmental agreement committed each tribe to protecting and ensuring complete and unfettered access to religious sites and the landscapes that are located therein. According the compact, the Hopi consider the confluence one of those areas.

Yellowman said the community should be highly involved and educated on the proposed project saying there had been no public education about the project.

“Community members need to know the concept of ecotourism and industrial tourism before the project is approved,” he said. “There was no open discussion at the chapter about the project and we feel excluded.”

The RDC tabled the legislation with a 3-2 vote. The bill moves forward to the Budget and Finance Committee next.

Navajo Nation President Russell Begaye has said he will veto the legislation should it make it to his desk.