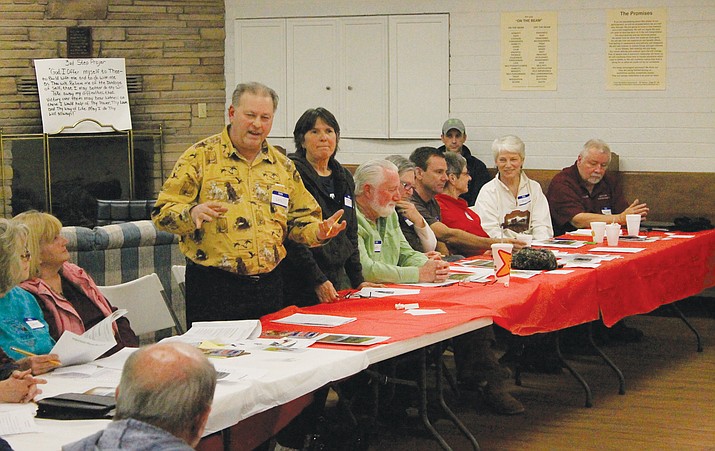 The 2016 event huddle had around 45 people from various organizations discussing how they could work together to coordinate local events.

WILLIAMS, Ariz. - The third annual Event Huddle is coming to Williams Feb. 6 at 5:30 p.m. at the American Legion building.

Last year’s Event Huddle drew about 45 people from various organizations who came to discuss how they could work together to coordinate events and help each other.

Participants from nonprofit groups such as SAVE-Meant to Rescue, Kiwanis, and Habitat for Humanity joined with businesses and churches such as Old Trails True Value and Calvary Chapel to discuss their missions and plans for the new year.

Organizer Kerry Lynn Moede said the Event Huddle is not sponsored by any organization and is for groups to brainstorm and discuss their plans and needs.

Moede came up with the idea for the Event Huddle after hearing different people talk about events that others did not know about or that other people might be able to help with.

She said since Williams is a small town, the community uses pretty much all of the same volunteer base and same fund base.

Moede said rather than different groups competing to put on various events independently, they could work together. She said it is a benefit to the community to be able to put their resources together.

“This year, not only will organizational leaders be invited, but anyone interested in hearing what is going on this year in Williams,” Moede said.

“If you are new to the community or have always been wanting to find a way to become involved, this is your chance,” she said. “We cordially invite anyone interested in the Williams Community, and the organizations and events in town, to the upcoming Third Annual Event Huddle.”

Each group is invited to present their plans to the group, but is limited to three minutes. Anyone interested in attending needs to RSVP with Moede by email at jdmoede@aol.com. The meeting takes place Feb. 6 at 5:30 p.m. at the American Legion Hall, 425 W. Grant Ave.