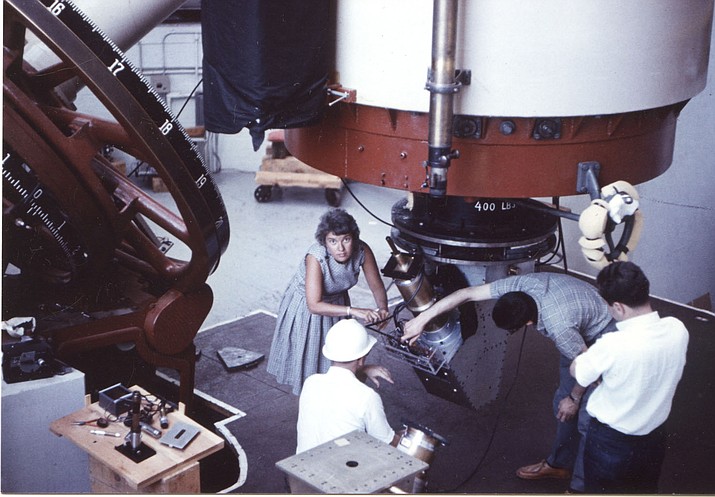 She was born in Philadelphia, Pennsylvania, and grew up in the Washington, DC area when her parents moved there. She attended and earned her bachelor of arts degree at Vassar, but when she applied to Princeton, was rejected, because at that time the university was only open to men.

She received her Master’s degree from Cornell in 1951, where she found herself involved in galactic dynamics, the branch of astrophysics concerned with the motion of stellar bodies within galaxies under the action of gravitational forces.

Rubin was an inquisitive individual, one who would ask questions others had not considered. She argued in her Master’s thesis that galaxies rotated around unknown centers, rather than moving outwards, as suggested by the Big Bang Theory. Unfortunately, these ideas were not well received by the major research journals and were rejected.

She later completed her doctorate at Georgetown University in 1954, where she researched previously unpublished red-shift data, concluding that, rather than galaxies being randomly distributed throughout the universe, they were grouped together in clumps. She also found that these galaxies formed a great circle against the sky, now known as the super galactic plane. Again, her work was rejected by the Journals.

But the questions she raised were eventually found to be very significant, and what she was narrowing in on was the presence of large-scale galactic structure and motion.

Rubin had an uncanny knack for seeing discrepancies in data, where the universe posed new questions, especially when it came to the motion of spiral galaxies. Once Rubin pointed out these inconsistencies and problems in galactic orbital motion, other astronomers began to take note.

The primary problem, she discovered, was the inconsistency in the rotation of galaxies. Astronomers expect galaxies to rotate in conventional ways, according to Kepler’s Laws, with stars nearer the center moving faster than those farther out, just as the inner planets orbit the sun much faster than the outer ones in our own solar system.

By 1974, Rubin was able to conclusively prove that the outer stars in spiral galaxies move much faster than could be explained by the mass of the matter visually observed in these galaxies. This implied that there was some unseen massive material out there that was unaccounted for. This non-visual material has been since termed dark matter.

We still have not been able to directly observe dark matter, though astronomers currently calculate indirectly that it is over a quarter of what makes up the universe, while only 5 percent is normal matter, the stuff we can actually observe through telescopes.

The rest is what astronomers are calling dark energy, which is also invisible and is the cause of the accelerated expansion of our universe. During her career, Rubin applied her mathematical and physics tools, and insight, to well over 200 galaxies.

Rubin was the first woman allowed to observe at Caltech’s Palomar Observatory. She also advocated for scientific literacy, stating at a commencement address in 1996, “We need senators who have studied physics and representatives who understand ecology.”

She expressed a deep appreciation for all that remains unknown about the universe:

“We have peered into a new world and have seen that it is more mysterious and more complex than we had imagined. Still more mysteries of the universe remain hidden. Their discovery awaits the adventurous scientists of the future. I like it this way,” she said.

Dr. Rubin’s passing has been felt throughout the astronomical community, where she not only influenced and advanced her science, but also inspired others, especially women, to study astronomy and physics, and to ask and answer difficult questions about problems that others have ignored, or not seen.