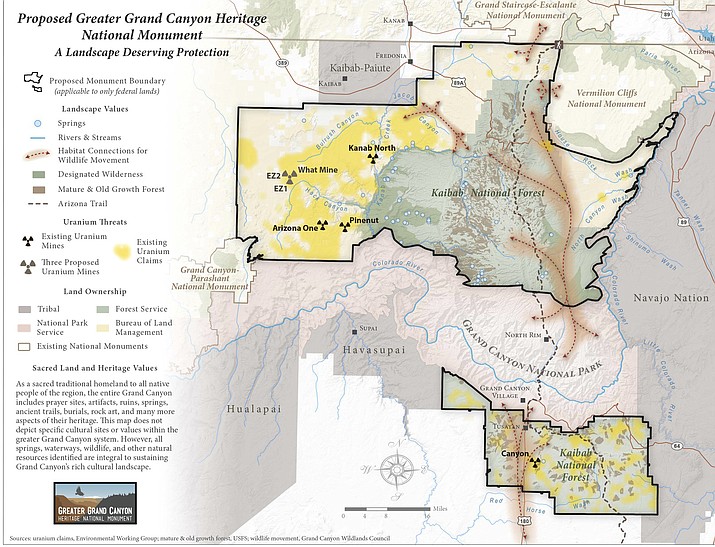 In the Jan. 6 press release, Grijalva expressed his disappointment in the decision not to establish the monument, which would have encompassed all of the north Kaibab and Tusayan ranger districts of the Kaibab National Forest as well as lands on the Arizona Strip north of the Colorado River. All lands are currently managed by the Bureau of Land Management, the U.S. Forest Service, Arizona Game and Fish Department, Arizona State Trust Lands, along with approximately 28,000 acres under private ownership.

“I can only express my profound disappointment,” Grijalva said. “The Grand Canyon is one of the world’s most iconic and popular natural places, not just for its beauty but for its importance to tribal culture and history. Instead of building on former Secretary Salazar’s work, the interior and agriculture departments are apparently willing to leave the future of the Grand Canyon and the health of Arizona tribes up to Donald Trump. I am not.”

In 2016, Williams was among a number of cities and towns to pass resolutions opposing the establishment of the monument.

At the time, McNelly said he and other council members were frustrated that state leaders had not consulted with local northern Arizona community members about the monument. He said the land was appropriately managed now and the council saw no reason for the designation of a monument.

“There is very little private land in this state and I think it is very important the people of this state manage the land and not be dictated from some government agency,” McNelly said.

McNelly said he was glad of the outcome and said it was the right decision for the people who live and work the area that would have been in or near the designation.

“I think it is a really positive thing for the state and I would really praise Paul Gosar for his efforts and his vision on giving a voice to this and doing what he could to stop it,” he said. “It is better for the people who live here to decide and make the regulations and rules that govern the land where we live and work.”

Supporters of the designation, which included local and national environmental groups, the Navajo Nation and the Hopi and Havasupai tribes were disappointed in the decision and have vowed to continue to fight for preservation efforts.

“While the lands beyond the rim of the Grand Canyon are no less spectacular, culturally important, or economically vital than before, they do now face an even greater risk,” said Sandy Bahr, director of the Grand Canyon Chapter of the Sierra Club. “We remain dedicated to working with area tribes and communities to ensure these lands are protected for future generations.”

Navajo Nation President Russell Begaye expressed his gratitude in the recent designation of Bears Ears National Monument in Utah, but said he was disappointed in the decision for the Grand Canyon monument.

“We are disappointed that the Grand Canyon was not included in the designation by President Barack Obama under the Antiquities Act,” Begaye said. “We were hopeful to have both designations, but we are thankful for the Bears Ears designation. The Grand Canyon is an international monument that is visited by millions of people each year. The next administration should seriously consider designating the Grand Canyon under the Antiquities Act as a national monument to protect the canyon from mining and abuse in the name of economic development. This landscape should not be destroyed but saved for future generations to admire the beauty of the Southwest. We need to make sure that it is protected as a national monument.”

On Jan. 6, Grijalva reintroduced the Greater Grand Canyon Heritage National Monument Act and started mobilizing monument supporters for a strong push in the 115th Congress. The bill, which closely mirrors the previous version, would confer national monument status on two parcels of federal land, one north and one south of Grand Canyon National Park.

“The need to protect the Grand Canyon is bigger than who’s president or who sits in Congress,” Grijalva said. “The American people demand that this important place be preserved. People from all walks of life have been fighting this fight for a long time, and we’re going to keep working until we get it done.”

McNelly said he will be more confident in the decision not to designate the monument after President-elect Donald Trump’s inauguration Jan. 20 and said he thought it was a good effort by Arizonans who opposed the designation, which he doesn’t see changing anytime soon.

“Right now Grijalva is in the minority, being a democrat. We have the majority and our champion, Paul Gosar who I’m sure will be on top of all those things,” he said. “I think Grijalva needs to get over it and go back to worrying about Tucson and not worrying about Williams and the North Rim.”