Two vintage signs circled above were stolen from a Seligman business Dec. 3. 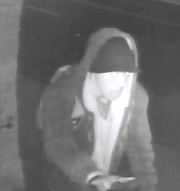 A suspect was captured on a video surveillance camera.

SELIGMAN, Ariz. — Yavapai County Sheriff’s (YCSO) deputies are looking for the thieves who took two antique signs off a building in the 22000 block of West Historic Route 66 on Dec. 3.

According to YCSO spokesman Dwight D’Evelyn, one sign advertised Coca-Cola; the other was a Goodyear Tire sign.

The signs were stolen around 2:30 a.m. on Dec. 3 and the owner reported the theft the following day.

D’Evelyn said the suspects may be driving a white Ford pick-up truck which he said had been involved with a similar theft in Kingman.