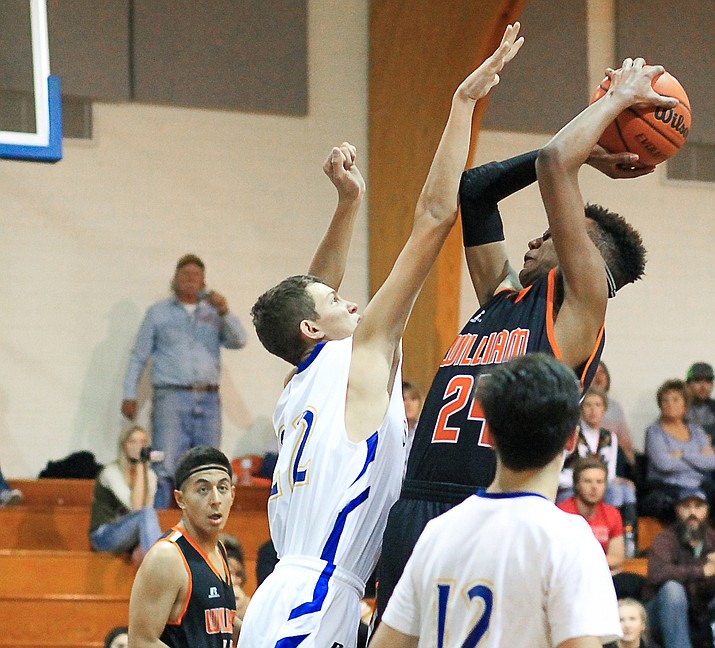 Coming off a 73-63 loss to the 2A Chino Valley Cougars, the Vikings got on the board quickly against the Spartans and led 14-3 at the end of the first quarter. 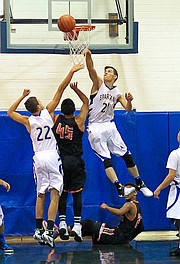 Spartan Rian Gutierrez blocks a shot under the net. 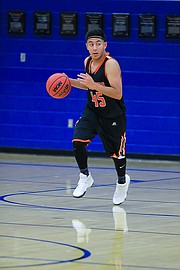 Juaquin Gutierrez brings the ball down court during the game with Ash Fork Dec. 20

The game was a battle of the bigs as Zack Perkins and Stephen Gary for the Vikings dueled William McMenamin and Rian Gutierrez for the Spartans with aggressive under-the-basket play. Perkins and Gary are new to the starting rotation this year and freshman McMenamin was new to the rotation, standing in for seniors Caesar Acosta and Jose Cohen for the Spartans. Gutierrez is a returning senior starter.

Fans got a glimpse of what was to come as Gary put the hammer on a McMenamin jumper, snagged the rebound and put up two. 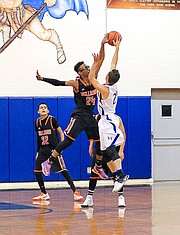 Young McMenamin was then again schooled by Perkins, who blocked another jumper to end the first with the Vikings leading 13-4.

The Spartans came alive in the second quarter as Lucas Escobedo and Damian Quijada began pulling the game to the outside with several field goals and 3-point shots to bring the score to 19-13 as Williams began to stall. 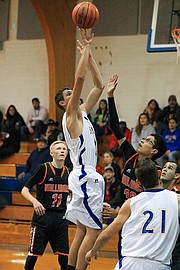 Spartan William McMenamin takes a shot during the game with Williams.

McMenamin continued to score inside and a Quijada — Rian Gutierrez double team brought Ash Fork its first lead of the game 22-21. The Vikings managed to enter the half still leading as Juaquin Gutierrez and Damien Pacheco teamed up for a buzzer beater layup to put Williams up 23-22 at the half.

The third quarter saw back and forth play by both teams as Rian Gutierrez lit up the board for the Spartans with several field goals and 3-pointers, and McMenamin continued to battle under the basket. Perkins and Gary led the quarter in scoring for the Vikes.

Going into the fourth quarter, Ash Fork led 32-30 until Perkins put up two to bring the Vikings up 34-32 with 6:18 left in the fourth. Mortensen’s aggressive play drew his fourth foul, which allowed Escobedo to sink two free throws to even the score.

Mortensen responded with another 3-pointer and a Juaquin Gutierrez pass to Perkins brought the Vikings back up 39-34.

Gary sunk one of two free throws and hit a layup to bring the Vikings up 42-34, but Escobedo again hit a 3-pointer to bring Ash Fork to 37.

With 1:43 left in the game, McMenamin put up one more field goal, but a field goal by Mortensen and a free throw by Juaquin Gutierrez sealed the win for the Vikings. 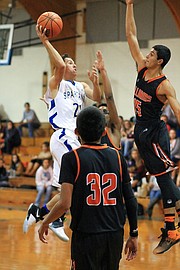 Mortensen led the the scoring for the Vikings with 20 points, including four 3-point shots. Perkins followed with 11. Mortensen and Perkins had four and three steals respectively.

Gary had seven points and Juaquin Gutierrez had five and went 3-for-4 on free throws.

The win moves the Vikings to 8-0 in the 1A Central region as the Spartans move to 2-5.