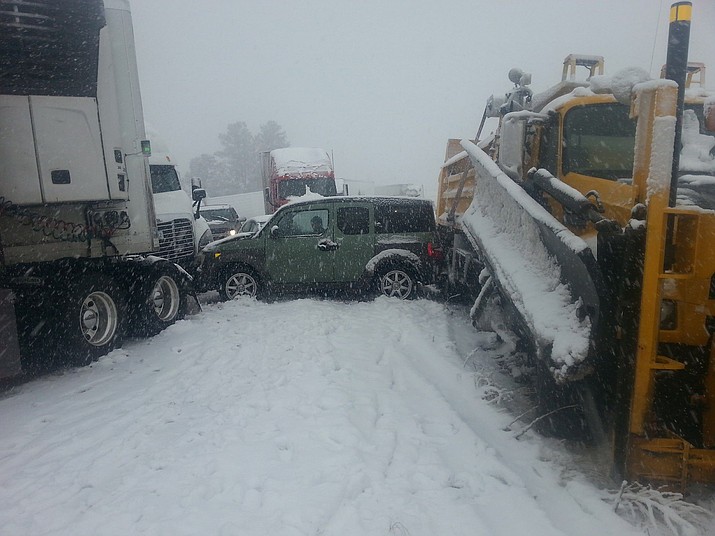 Multiple accidents on Christmas Eve prompted closures on I-40 and I-17 in northern Arizona, where communities received up to 15 inches of snow.

WILLIAMS, Ariz. — A Christmas Eve snowstorm kept law enforcement and other emergency services busy last weekend as Interstate 40 was rapidly buried in up to 15 inches of snow, causing a 28-car pileup and numerous traffic delays for holiday travelers.

Officers from the Arizona Department of Public Safety (AZDPS), Coconino County Sheriff’s Office (CCSO) and Williams Police Department, along with Lifeline Ambulance and Williams Fire Department, responded o dozens of crashes on I-40 between 2 and 6 p.m.

Williams Fire Department responded to a 28-vehicle accident on I-40 at milepost 163 near Williams Dec. 24.

According to AZDPS Public Information Officer Raul Garcia, the severe winter storm and the slippery conditions it created, in combination with vehicles traveling at speeds greater than reasonable and prudent for the conditions, were the contributing factors.

I-40 was closed for several hours both directions by state troopers along with Arizona Department of Transportation (ADOT) because of the crashes.

Garcia said nine commercial trucks were involved in the pileup that occurred between exits 163 and 165, just north of Williams, and required heavy duty tow vehicles to remove them. He said the tow vehicles had difficulty reaching the crash scene because of weather, backed up traffic and the numerous calls for service they had received.

Williams Police Department Lieutenant Darrell Hixon said the I-40 closure significantly impacted the town of Williams as vehicles trapped on the interstate flooded into town.

Williams Fire Department responded to a 28-vehicle accident on I-40 at milepost 163 near Williams Dec. 24

“As far as traffic and manpower, everybody had to come in,” Hixon said. “The chief came in, I came in, every man that we could get.”

Hixon said the police department’s main concern was the limited medical response because of the storm. He said one ambulance was trapped in Flagstaff after the I-40 closure, leaving only one ambulance in town. He said no other ambulances could get to Williams with the interstate closed eastbound and westbound.

“Luckily the clinic (North Country HealthCare) was open until 8:30,” he said. “Our resources for medical was something to be concerned about. We couldn’t use DPS Flight for Life because of the weather. Luckily we didn’t have a situation for that but we had to be prepared to hunker down with a patient.”

“Love’s (Travel Stop) got jammed up too because of its location and proximity to the accident,” Hixon said. “Instead of an asset for people to go, it became a log jam which caused more problems for traffic control.”

Hixon said there were no major problems during the storm closure for the city, but he said the incident required a lot of organization by the department.

Williams Fire Department responded to a 28-vehicle accident on I-40 at milepost 163 near Williams Dec. 24

“This was a significant storm,” he said. “Not for the storm damage, but for storm management. It required a lot of manpower hours for the PD.”

Williams Fire Department responded to the I-40 pileup with two fire trucks to help evacuate those who were injured.

“From what I could tell, most of the injuries were minor,” said Williams firefighter John Moede.

However, Moede said many of the victims in the I-40 crashes were unprepared for winter weather conditions.

“Here we are in the middle of this snowstorm pulling these kids out (of cars) who are all wearing pajamas,” he said. “People need to remember to be prepared for the unexpected.”

Moede said he was concerned about having enough firemen for the holiday weekend. He said five of the department’s volunteers were out of town.

“I’m very proud of these guys,” Moede said. “When the call went out we had two guys on Rescue 1, six on Engine 7 and we had two more on deck in case we needed more help.”

“We had a major gas leak at Love’s, a tree blown down and a powerline down,” Moede said.

Yavapai County Sheriff’s Office was also impacted by the I-40 closure.

“Most of our calls (Dec. 24) involved assisting DPS with state road issues as their crews were stretched to the limit. We had several calls regarding stranded motorists who became frustrated with the I-40 closure and attempted to drive out of Williams on Perkinsville Road to access Highway 89,” said Dwight D’Evelyn of the Yavapai County Sheriff’s Office.

D’Evelyn said YCSO deputies also responded to calls from drivers who tried various side roads along I-40 and either got stuck or lost.

Related to the storm, the calls for assistance included: