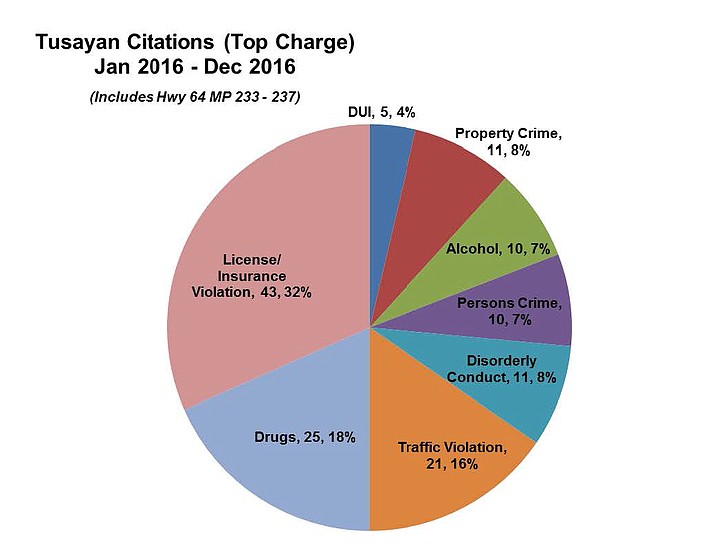 Chart detailing the citations issued by the Coconino County Sheriff’s department for the town of Tusayan in 2016.

TUSAYAN, Ariz. — According to the Coconino County Sheriff’s department (CCSO), the majority of law enforcement citations inside the town of Tusayan include moving or traffic violations.

Drug activity and disorderly conduct round out the top three categories in the 2016 report.

Lt. Brian Tozer, district commander for the CCSO, presented the department’s findings to the town council at the Feb. 15 meeting. Tozer outlined officer activity in the area, which does not include calls for service from town citizens, as well as calls for service received, reports issued and the top charge or citations given during 2016.

Tozer also outlined calls for service received from citizens. Fouteen percent of those calls resulted in officers following up with individuals to take reports. The next largest portion of calls (13.5 percent) were for suspicious activity, which Tozer defined as anything from a person behaving erratically to verbal altercations or loud music. The department also took calls for motorist/public assist, accidents, person and property crimes, civil matters such as service of papers, non-crimes such as found property or suicides, disturbing the peace, fire activity such as illegal campfires, alarms, search and rescue requests, emergency medical situations, fraud reports, animal-related issues, drug activity and other issues such as warrants or juvenile incidents.

Officers responding to the calls determined if any further action was necessary — the top charges issued in the reports included property crime, persons crime and accidents, most of which happened on private property.

Tozer said property crime could be as simple as someone backing into a light pole and damaging it, noting that most of the incidents didn’t include vandalism.

“Persons crime is any crime against a person,” Tozer explained. “That includes assaults. Mostly we find that people have had a little too much to drink and become involved in altercations outside.”

Tozer also presented a list of citations — incidents for which parties were ticketed at the scene or received another disciplinary action.

License and insurance violations, such as driving without proof of insurance or driving on a suspended or revoked license, as well as other traffic violations like parking or speeding, represent 48 percent of all citations issued. Tozer noted that while tourists are expected to obtain an international driver’s license before renting a car and driving in Arizona, they are generally not ticketed for a license violation if they can produce a valid license from their country of origin.

Drug activity was next with 18 percent, followed by disorderly conduct at 11 percent. Persons crime, alcohol incidents, property crime and driving under the influence made up the remaining 26 percent of citations issued.

Tozer also said the department is continuing efforts to assign a full-time deputy to reside in Tusayan. Currently, officers from Flagstaff and Williams are assigned to the town.