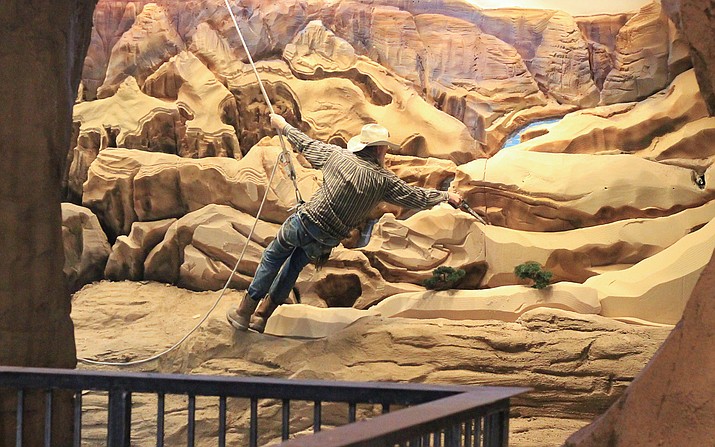 Artist Jonathan LaBenne puts the final touches on the walls at the Canyonlands Restaurant at Bearizona Feb. 23. LaBenne and his family have created multiple carvings, arches, murals and rock walls throughout Bearizona.

WILLIAMS, Ariz. — Anyone who has visited Bearizona is familiar with the intricate rock sculptures, carved signs and sculpted wildlife that are scattered throughout the property. Those who have ventured into the gift shop have walked into a replica of an old mine.

Jonathan LaBenne takes a break from working on the wall at the new Canyonlands Restaurant at Bearizona.

Jesse, Josh, Ann and Jonathan LaBenne are the artists who have made Bearizona the unique wildlife park that it is. They have been working at Bearizona since the parks inception in 2009. Over the years they travel back and forth from their home in Afton, Wyoming as new projects arise at Bearizona.

Jonathan LaBenne stands next to a bear carving he is working on at Bearizona.

Their most recent job at Bearizona is nearing completion with the design and construction of the Canyonlands Restaurant, located next to the gift shop at the park.

“Right now we’re finishing up the Grand Canyon (wall sculpture) and my son is trying to get all the shadowing on the ceiling,” Jonathan LaBenne said of the restaurant walls.

Jonathan “The Bear Man” is the patriarch of the family who, with his wife Pamela, have helped develop and nurture the love of art in his children. Three of his five children work with him on the Bearizona project.

Josh LaBenne works on a wall mural of a mountain lion.

“Jesse and Josh did the ceiling in the gift shop,” said Bearizona owner Sean Casey. “We have fun brainstorming together about what we are going to do next.”

Casey said he and Jonathan met at Bear Country, a similar wildlife park, run by his extended family in South Dakota.

“In my career, I have three guys that are a lot of fun to work with,” Jonathan said. “And Sean is one of them.”

Casey is hoping to open the Canyonlands Restaurant at Bearizona by the end of March. The restaurant will have a southwest

The restaurant at Bearizona will have a southwest canyon lands atmosphere. Josh LaBenne just completed a mural of the Grand Canyon.

atmosphere. As patrons enter the restaurant, floor to ceiling sculptures of rock walls, ruins, and the Grand Canyon will surround them. The restaurant will have two levels, with a deck off the upper level that will overlook the jaguar exhibit.

Jonathan said the biggest challenge has been incorporating functionality in with the artwork.

“The electrical was a challenge,” Jonathan said. “The engineers said the place has to work too, it’s not all looks.”

Jonathan said the interior sculptures began with steel framing which was covered in sheet metal.

“And thousands of screws,” he chuckled.

Once the sheet metal was in place, the LaBennes and several Bearizona employees bent the metal to resemble rocks with ledges. They then used foam, plaster, concrete and other mediums to sculpt the rock walls and ruins.

“There are a lot of hurdles that go along with creativity,” Jonathan said. “But that is one of the joys of art, taking a new material and making it into something beautiful.”

The LaBennes use a variety of materials in their artwork. At Bearizona, many of the rock sculptures and arches overlay old cars and trucks, which got them into trouble during initial construction at Bearizona.

“We got reported for trashing up the community,” Jonathan said. “We take the vehicles and smash then with a big backhoe and make them look worse than they did. Somebody called the EPA, who came out and met with us. But the funny thing was they ended up green tagging us. They said it was awesome because we were recycling.”

Jonathan said his family likes to be environmentally friendly, which also helps with costs.

“It saves us a lot of money and it’s a lot of fun,” Jonathan said. “You go find some wrecked old car and you immediately start seeing the rock it’s going to be. We also like saving something from the dump and making it a permanent beautiful structure.”

The LaBennes are well known in Wyoming and California for their life-sized sculptures, intricate wildlife carvings, signage, furniture, relief work and paintings. Many of their sculptures can be seen scattered around Jackson, Wyoming.

Jonathan was born near the Pacific coast in Washington and spent much of his early life appreciating nature. He loved art and the outdoors from an early age and began working for the U.S. Forest Service after high school. During that time, he began to merge his love of art with the outdoors through songwriting, painting, carving and sculpture.

With the help of his co-workers and friends, Jonathan made the slow transition from parks and forest work to full-time sculpting.

“It was tough after I quit the forest service,” he said “But I got some news media with Dan Rather, and that just pushed us on.”

Initially he was known as a chainsaw artist but his desire for refinement and detail, and his love for relief work began to show in his artwork as he incorporated Dremels, grinders, sanders, torches and high speed carving tools to his trade.

His growing family moved to Wyoming in the early 1990s and several galleries in Jackson began to display his work. He created projects for the city, hotels, Bear Country and celebrities such as actors Connie Stevens and Robert Redford, and racing legend Richard Petty.

Once the restaurant is complete at Bearizona, the LaBennes plan to return to Afton to work on their art that is displayed at the multiple galleries in Jackson.

“We do little logs and bears and other wildlife designs,” he said. “We can’t keep them stocked.”

Jonathan said he and his family will return to Bearizona for future animal exhibits that are planned and for work on the proposed hotel.

The Kennelly family, who owns Station 66 Italian Bistro, the Historic Brewing Company and the Grand Canyon Winery in Williams, will run Bearizona’s restaurant.

Bearizona operations manager Jocelyn Monteverde said the 6,000 square foot restaurant will be considered fast casual but will offer a buffet line for larger groups such as bus tours.