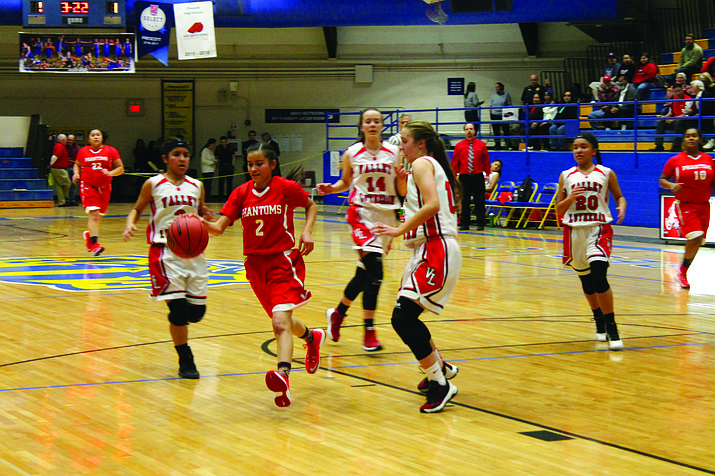 Cayli Miles dribbles through three Flames defenders in the Phantoms' loss to Valley Lutheran in the state tournament Feb. 17 at Prescott High School. 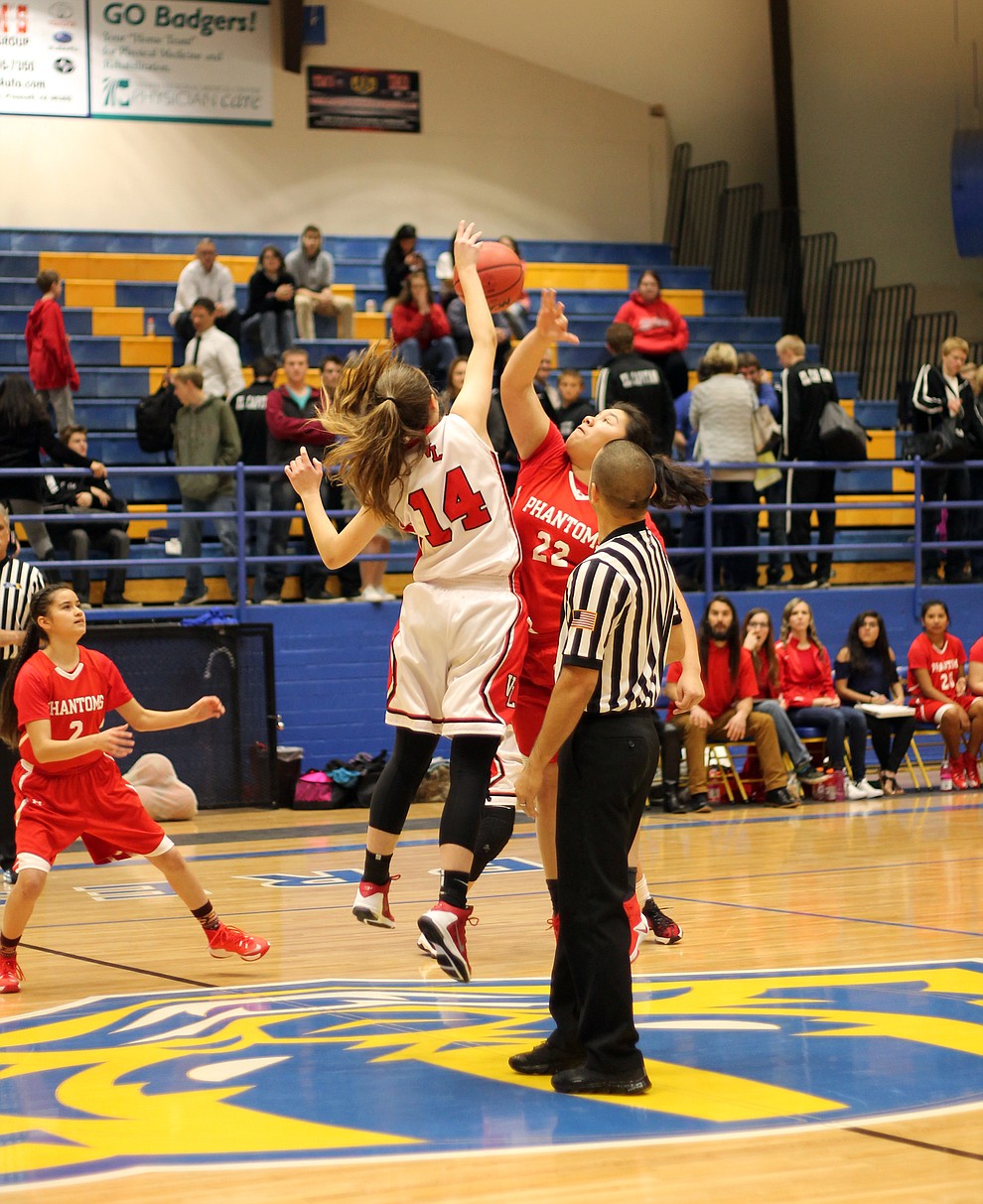 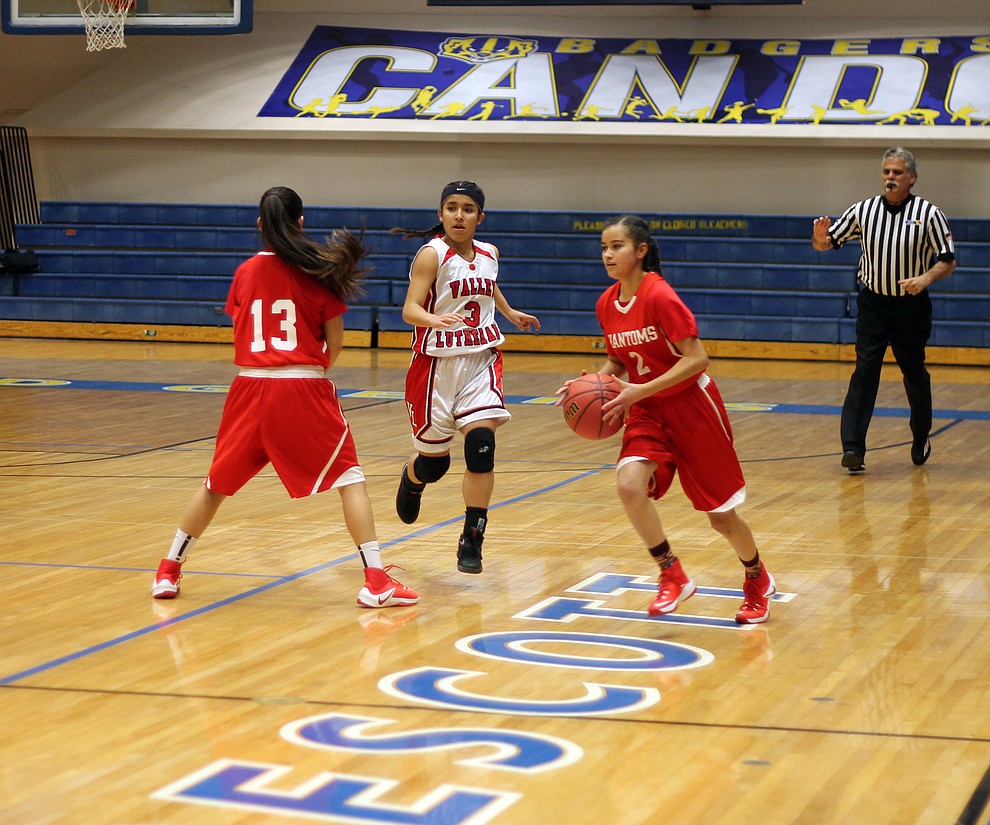 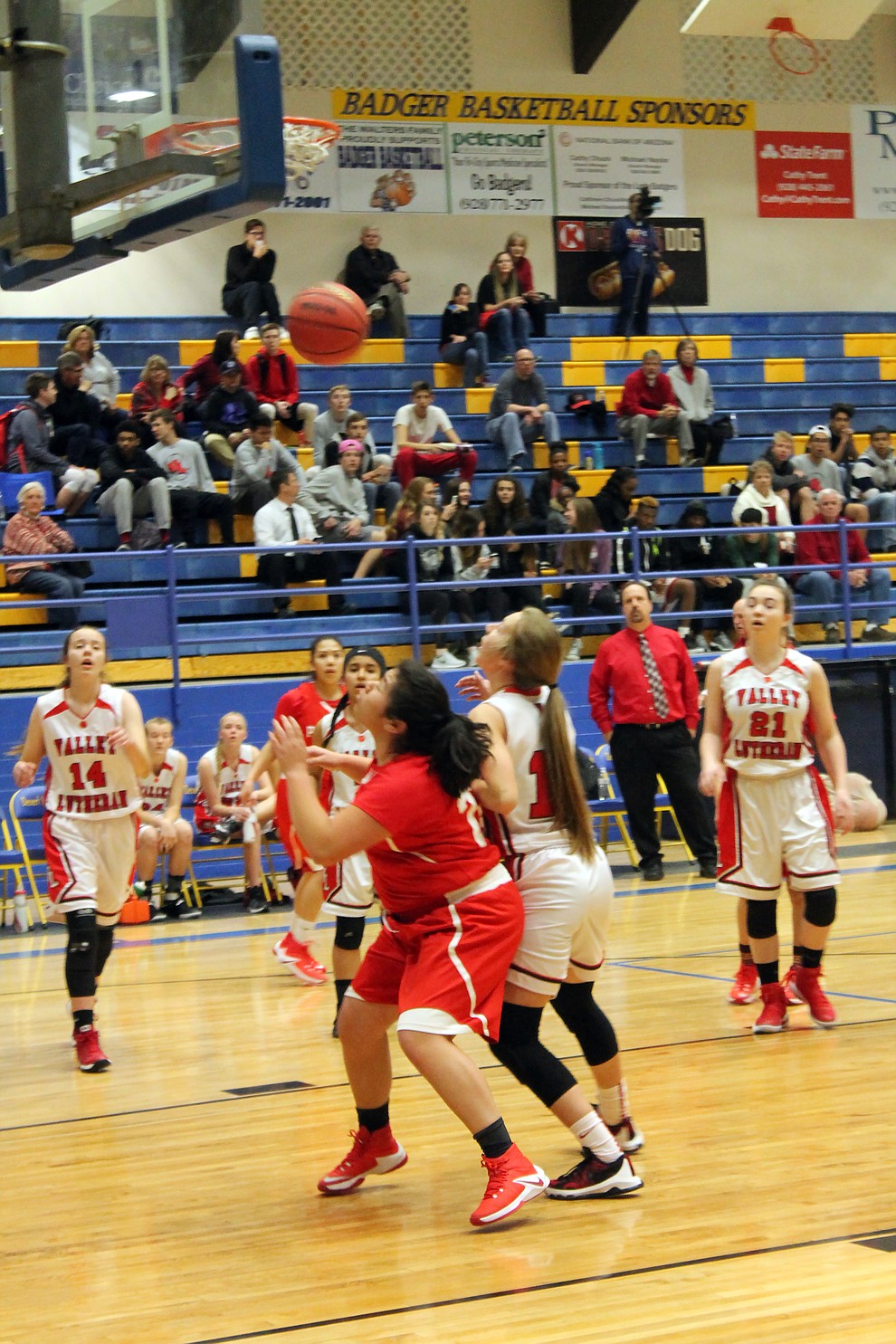 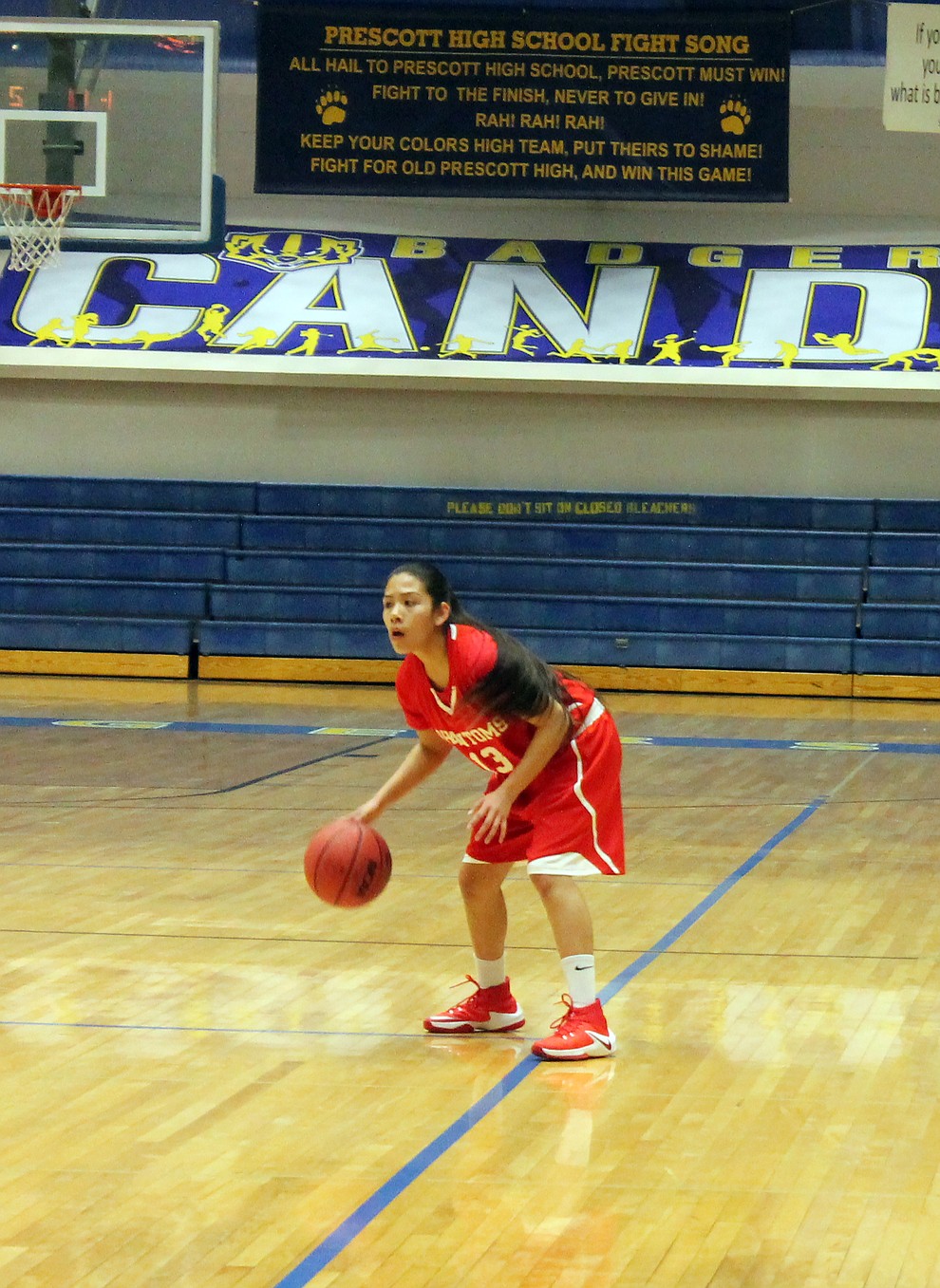 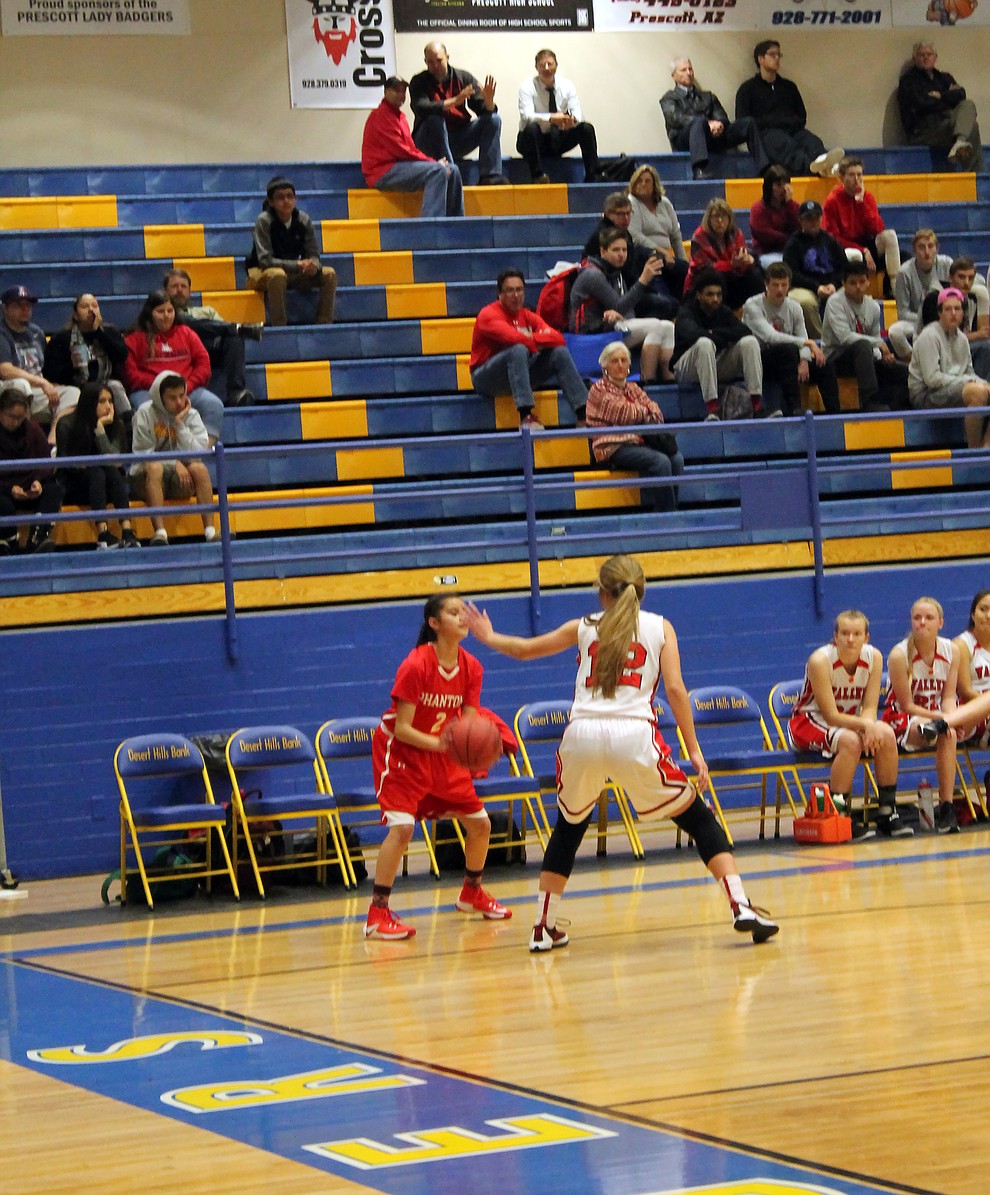 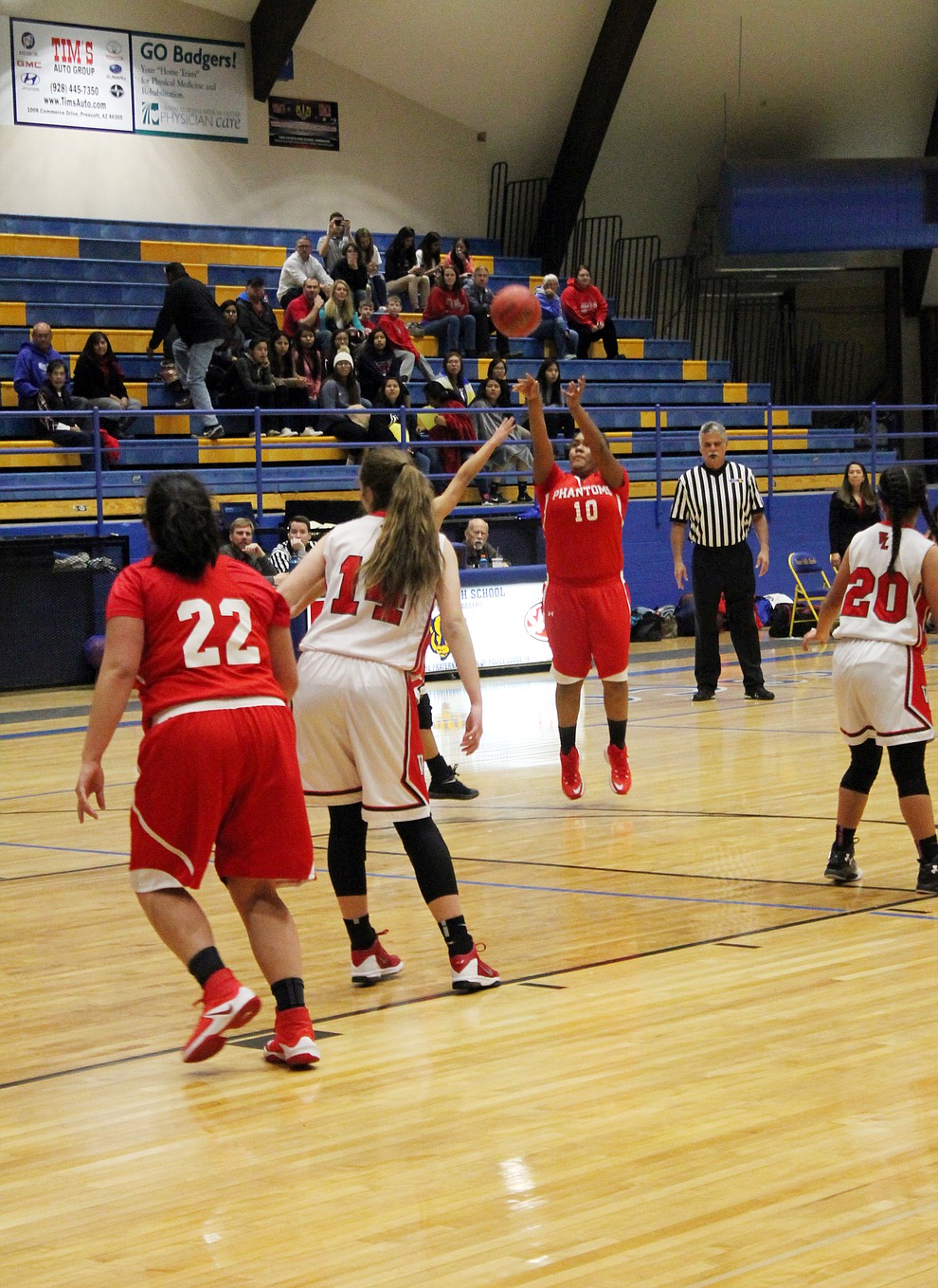 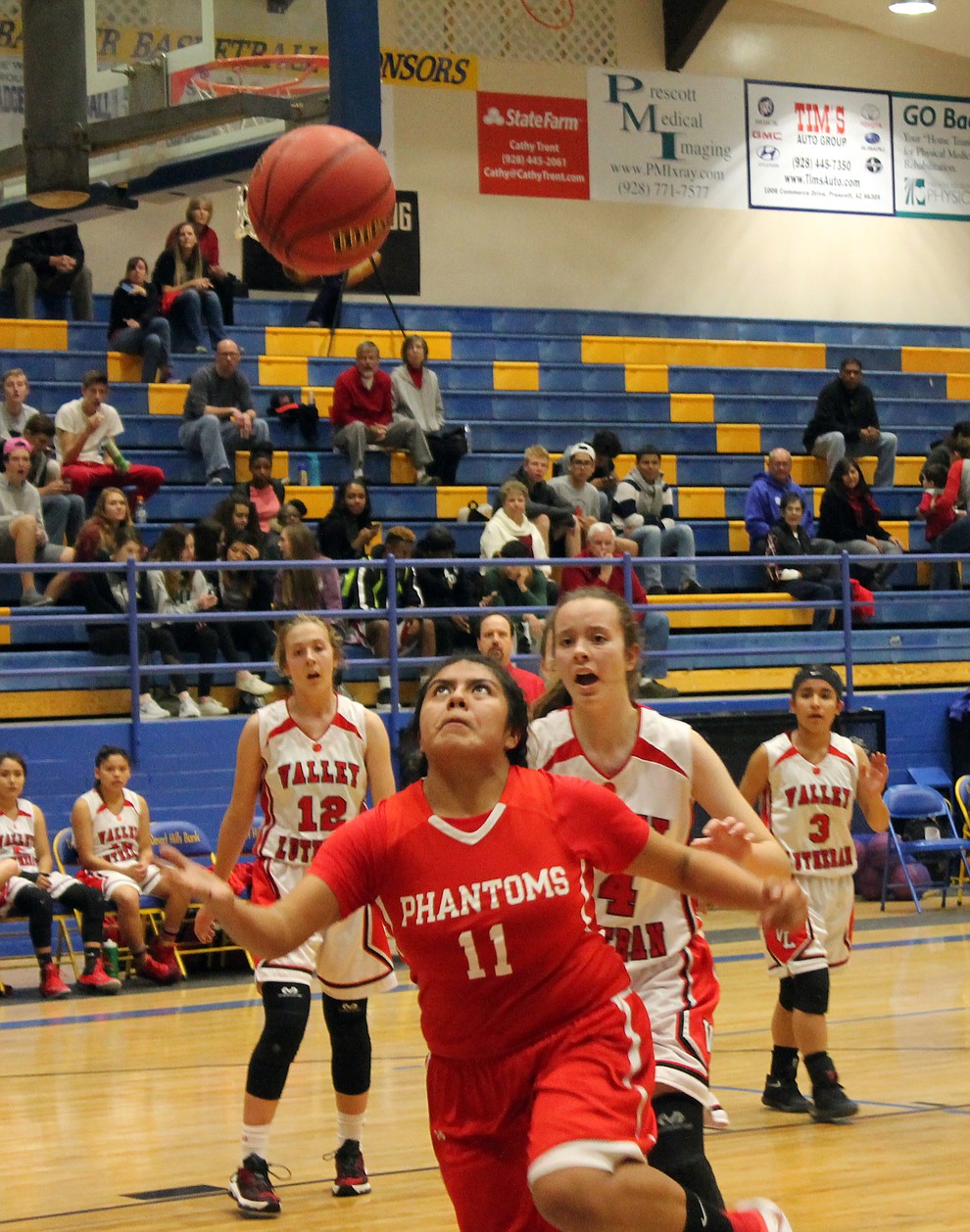 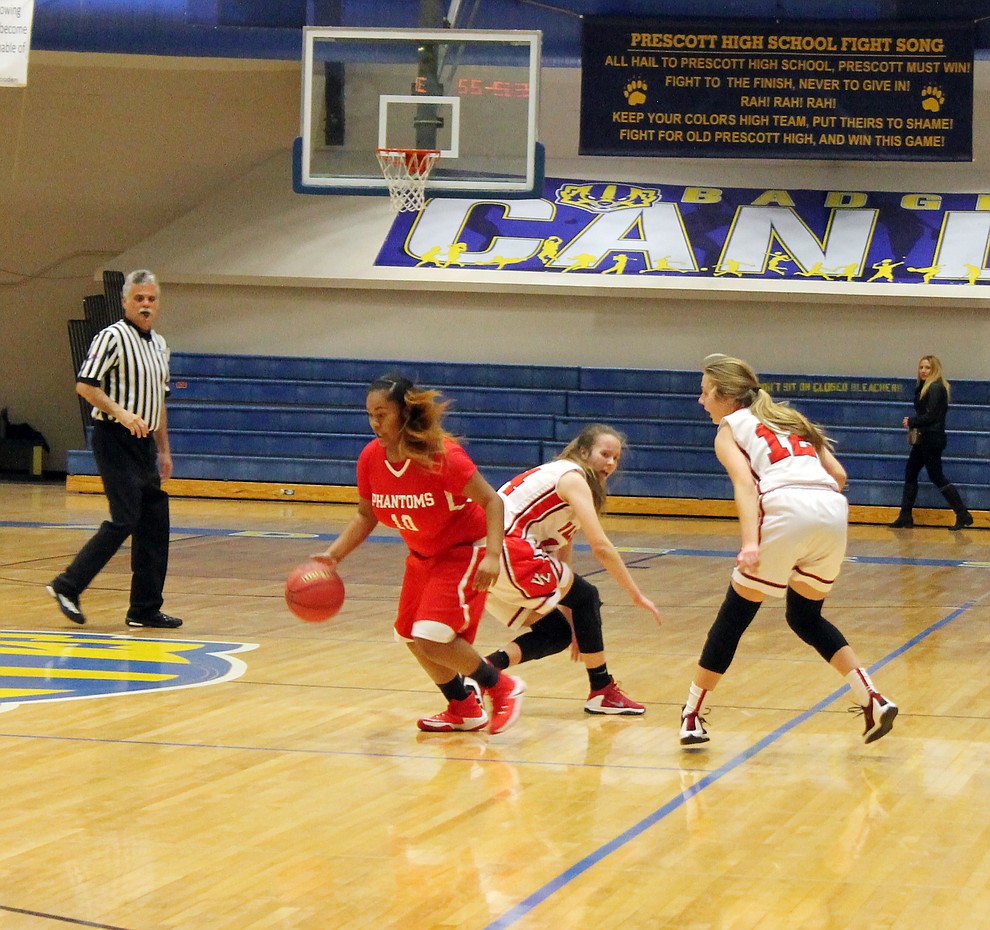 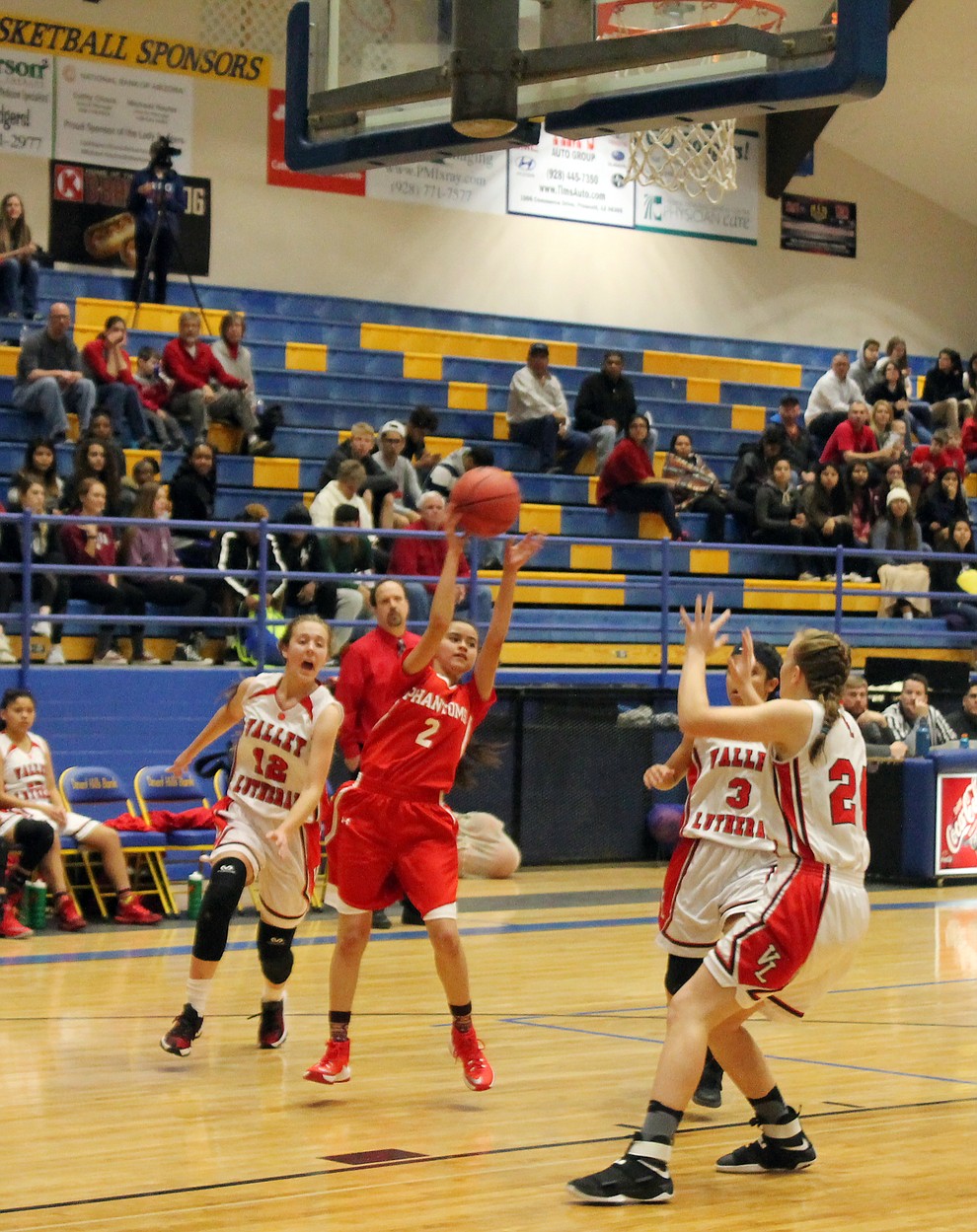 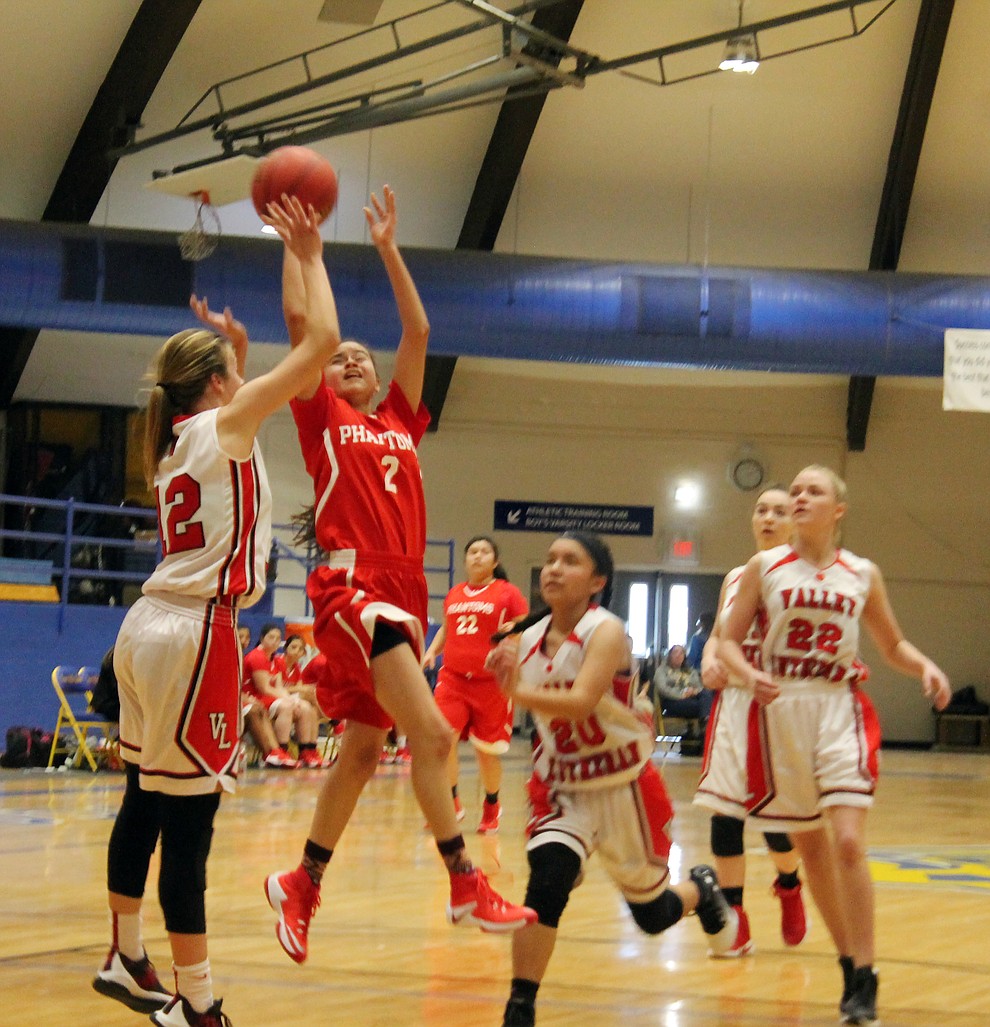 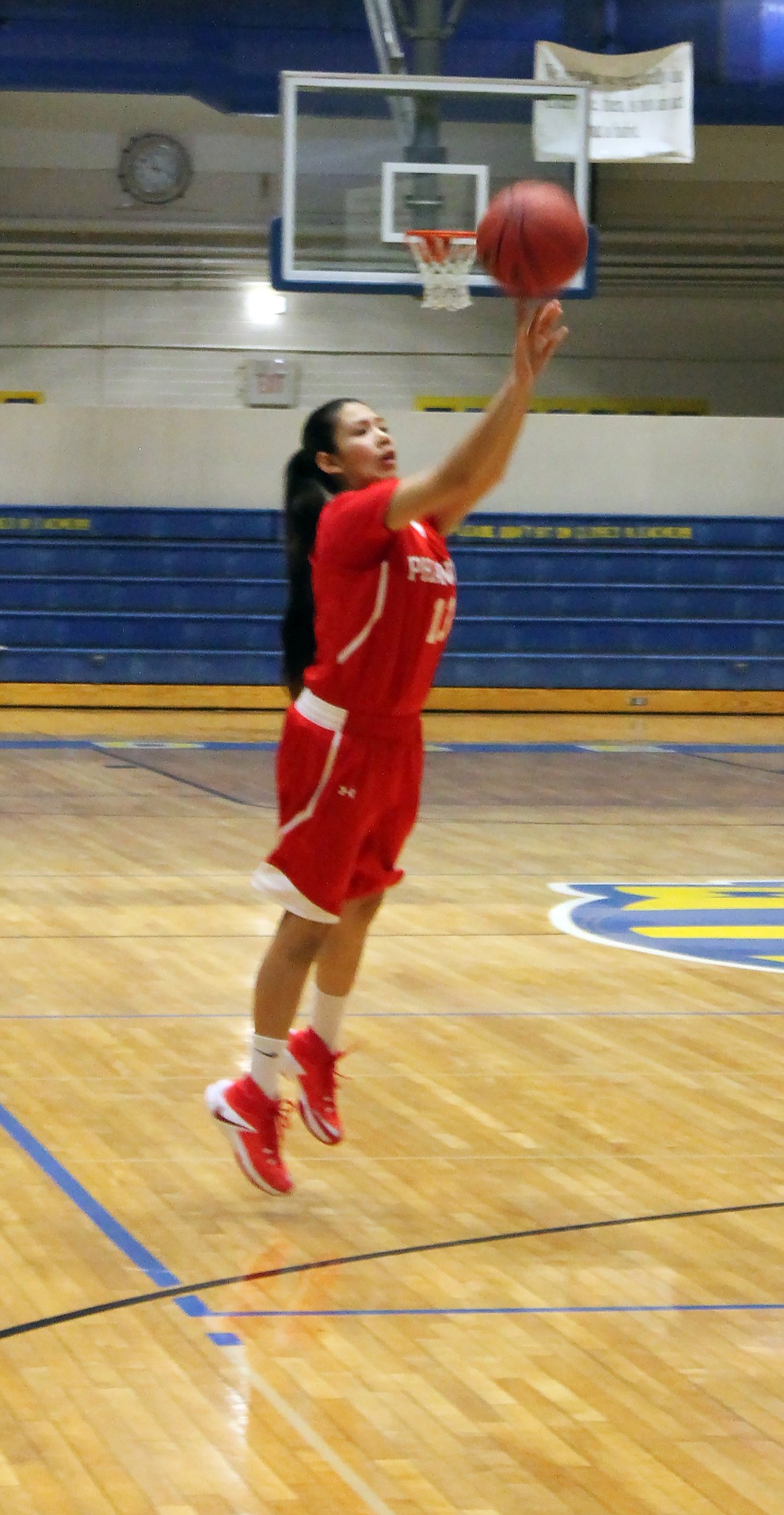 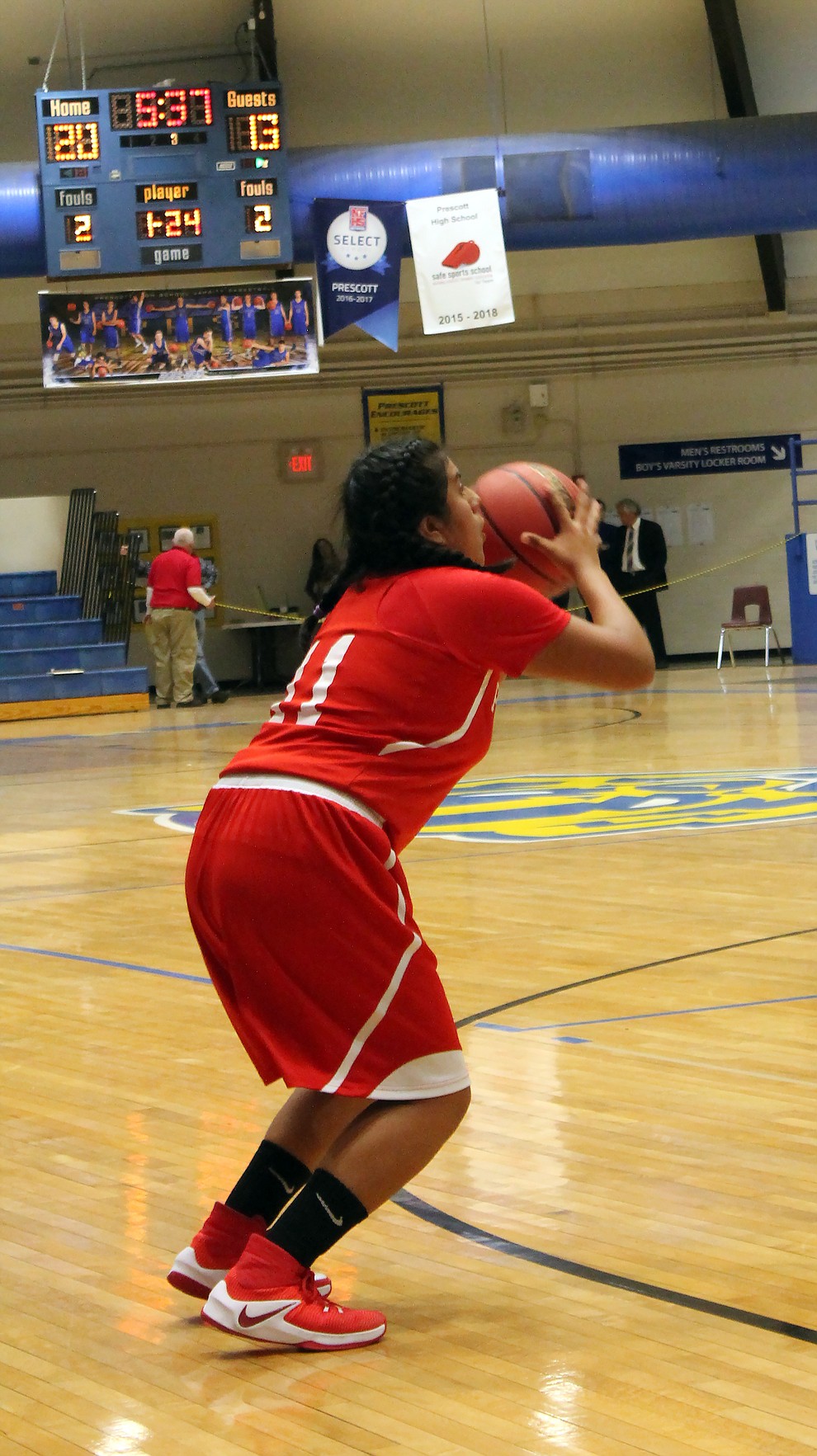 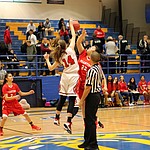 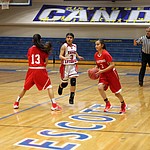 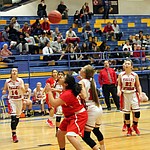 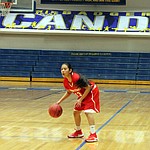 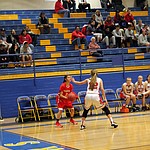 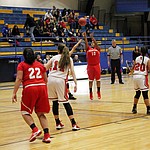 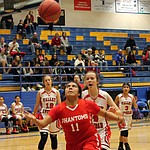 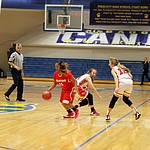 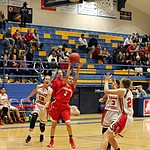 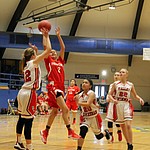 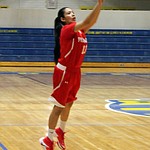 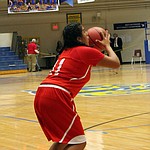 GRAND CANYON, Ariz. — For the first quarter of their first-round state tournament game with Valley Lutheran, the Lady Phantoms played as hot as they have for the entire season — fast, furious, and with a lot of nerve.

Cayli Miles and Meme Jetter led the charge as the Phantoms jumped out to a 14-3 lead. Although they stayed tough until the end, the Phantoms lost to the Flames, 34-20.

Shooting grew cold in the second quarter, though, and the Flames took over the game, scoring 23 unanswered points in the second and third quarters. The Lady Phantoms played well up and down the court, scrambling for the ball and working hard under the basket — Miles had 10 steals, Jetter contributed seven and Mariela Montano had five. Jetter was also a force under the basket, pulling down 13 rebounds, while Valeria Romero grabbed 10.

The next points didn’t come until two minutes into the fourth quarter, as Jetter scored five points quickly to give the Phantoms a spark. Miles added a field goal, but with the clock winding down, there simply wasn’t enough time left in the game for a comeback.

Still, head coach Rosie Evans said the team played together and played hard, two things she has been driving home to the girls since the season started. This year marks the first time the Lady Phantoms have been to the state tournament since 2009.

Evans said the team created their own goals and guidance through CCHATS – commitment, communication, hard work, accountability and selflessness.

“For a team this young to reach this far has been beyond my expectations,” she said. “We started the season as individuals aiming to form a team, and gradually we have formed a family.”

A young team means that there is always next year. Three Lady Phantoms – candy Lopez, Montano and Romero — will graduate in May. The team is looking to return strong next season behind the leadership of the juniors who grew into their roles this season, including Jetter. The team also has talented freshmen Miles and Makiah Kennedy, who will continue to improve.

The Lady Phantoms finished the season with a 12-3 record overall.

Even younger than the girl’s team, the boys spent the season building their fundamentals and learning to play as a cohesive group. Mostly freshmen and sophomores with a few juniors, the team had a 3-14 on the season, with wins over Mayer and Shonto Prep. The team lost one of its best players, Israel Herrera, to a knee injury after the first home game.

Head coach David Perkins said Travis Moreno had a standout year on both offense and defense, providing toughness and leadership to the young team. Perkins said Aleryn Reid, a sophomore, and Melakai Longhoma, Rufus Keebahe and Mason Tacey, all freshmen, showed a lot of potential and made good progress throughout the season.